Tayla finishes ahead of the pack | via South Gippsland Sentinel Times | THE Bass Coast Breakers had a lot to celebrate in their second season with the ultimate team success of winning the premiership sweetened by individual accolades awarded to some of its rising stars.
Tayla Stahl, the league’s leading goal kicker, capped off an outstanding 2018 season by also taking out the South Eastern Women’s Division 2 League Best and Fairest.
“Tayla has gone from strength to strength this season. Skilful, fast and tough she has taken her game to the next level this year,” said Breakers president Ella Angarane.
Playing predominantly full-forward but also spending time in the mid-field Tayla finished the regular season games with 60 goals (from 12 games) and proved she is dangerous anywhere on the ground.
Her tally was a massive 41 goals ahead of second placed Laura Field from Seaford on 19.
Starting the season with a bag of five against the Eastern Devils in round one, Tayla lead the goal kicking table all year.
Her impressive season included two eight goal hauls and an average of five goals per game.
The league best and fairest voting was also one-sided with the Breakers undefeated season seeing Tayla poll 21 votes, five ahead of her teammate and 2017 Development League Best and Fairest Sophie Bolding on 16.

Tayla’s talents have not gone unnoticed with Richmond VFLW team inviting Tayla to train with them mid-season and she has since signed with them for the 2019 VFLW season.
“While the Breakers are sad to see her go, it is rewarding to know that we can provide a viable pathway for local women to progress to the next level of football. 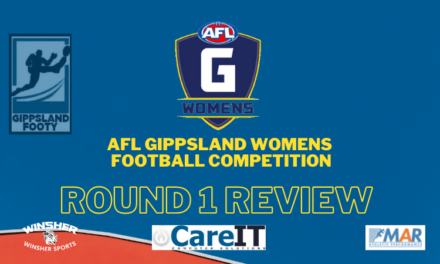