MATCH REVIEWS – by David Braithwaite, reporting for and published by Gippsland Times.

After three weekends without senior football, players and supporters relished the return to play
on Saturday. The season has been reduced to 14 rounds, with the previous two rounds scheduled to be played later in the year, replacing rounds 15 and 16. Each of the eight clubs will play each other twice before
the finals.

Stratford was awarded victory over Boisdale- Briagolong in an East Gippsland football match abandoned early in the second half.
A Boisdale-Briagolong player was knocked out shortly after play resumed for the second half. While waiting for paramedics to arrive at the Boisdale Recreation Reserve, the player was not moved because of a history of concussion.
The player regained consciousness and responded to paramedics before leaving the ground in the ambulance.
With the game halted for more than 30 minutes, the rest of the match was abandoned. Because the pause happened in the second half, the scores at the time were taken as the result, with Stratford declared the winner by one point, 4.3 (27) to 4.3 (26).
Boisdale-Briagolong led by two points at quarter- time, with all three of the Bombers’ goals coming from the boot of Jim Reeves. Stratford edged its way in front by the main break, kicking two goals to one, to lead by one point.
Neither team added to their score in the second half, before the game came to a premature end.
Brad White provided run off half-back, Regan Tait had plenty of the ball on the wing and Tim Hawkins was again a strong target at centre half-forward. Rodney O’Keefe kicked two goals.
Reeves led the way for the Bombers, kicking all four of their goals to move above O’Keefe on top of the league goal kickers list.
With their victory, the Swans maintained their hold on top spot on the ladder, ahead of Lakes Entrance and Lindenow on percentage, while the Bombers fell from second to fourth place.

The Seagulls defeated the home side by four points, 8.10 (58) to 8.6 (54).
Leading by seven points at half-time, the Seagulls had three more scoring shots in the second half, but were out-scored after the main break.
Liam Carroll and Max Bowden were the Seagulls best players, with Tom Smith kicking three goals.
Unable to reduce the two-game gap between them and the top four, the Blues were best served by
Andrew Malcolm and Ash Jonkers.

Lindenow recorded its fourth consecutive victory, defeating Wy Yung by 19 points at home.
The sides began the second quarter level on the scoreboard before the Cats kicked two unanswered goals to lead by 12 points at half-time.
The Cats kicked three goals to two in the second half to win a low-scoring match 6.6 (42) to 3.5 (23).
Bayden Ashwood and Jack Neal were the Cats’ best players, with Mitch Dewar and Mitch Toms best for the Tigers, who are now in seventh place with one win for the season.

Lucknow claimed its second win to move above Wy Yung into sixth place.
The Magpies defeated the win-less Paynesville by 55 points, 12.12 (84) to 4.5 (29).
Leading by 28 points at half-time, the Magpies kicked the only four goals of the third term to take away any hope the Gulls had of a comeback victory.
Both sides kicked two goals during final quarter. Ryan Ladson, Ryan Halford and Reuben O’Brien led the way for Lucknow.
The Magpies will look to go for back-to-back wins this Saturday, when 2011 Brownlow medallist Dane Swan takes to the field for them against Stratford.

Boisdale-Briagolong will also be away this week-end, playing at Wy Yung, while Lakes Entrance and Lindenow will clash for a spot in the top two, and Orbost-Snowy Rovers will head to Paynesville. 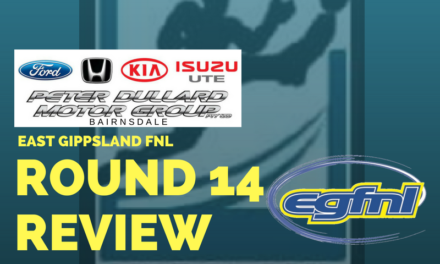