The well-behaved crowd witnessed a senior match, which ebbed and flowed with Bruthen running home the strongest. Three-time league best and fairest, Harley Kenner, was awarded the best afield medal. Lindenow South caused the netball boilover of the season, defeating the previously unbeaten Buchan by 18 goals in the decider. South also won the junior football and “B” grade netball, while Buchan claimed the 17 and under netball crown.

The Bulldogs came from behind to overrun minor premier, Omeo Benambra, by 13 points at a packed Lindenow South Recreation Reserve on Saturday.

The win was sealed by equal league best and fairest winner, Jamie Barton, who after a dominant final term, made the most of an out of bounds on the full free kick, turning his Ranges opponent on the mark inside out before drilling the dagger from long range in the left forward pocket.

Omeo Benambra was the better team in the opening half, outpointing the Bulldogs in the key areas while displaying a higher level of hunger around the contest as they led by 11 at the main break.

However, Bruthen lifted during what was a slow third quarter with only two goals kicked. Veteran, Andrew Papp, roved a boundary throw in and goaled while Barton stepped up approaching time on with a 30m snap.

Scores were level at the final break, but only after a scoreboard change prior to the start of the last quarter. At three quarter time the scoreboard had Bruthen in front by two points and the scoreboard issues continued early in the last, however were finally corrected around the 10-minute mark.

Despite the Ranges kicking the opening goal of the fourth quarter, the Bulldogs were the more attacking and precise team.

Equal league best and fairest, Harley Kenner who was awarded the best afield medal – put Bruthen in front for the first time at the 10-minute mark before captain, Darcy Spong, made his side’s advantage seven only seconds later with a smart snap from the right forward pocket.

Omeo Benambra was now feeling the pressure and its play was rushed, however it did result in a Riley Steenholdt tumbler finding the big sticks to level scores after 14 minutes.

Bruthen didn’t panic and responded immediately through Craig Taylor, who played in defence for the first three quarters before being swung forward when it counted.

Omeo Benambra would miss two more opportunities to draw level and even steal the lead, however Bruthen was more composed and Barton was the one who delivered the winning goal.

It was a grand final that was simply a tale of two halves – Omeo Benambra won the desperation battle in the first, Bruthen lifted in the second and capitalised in the final term.

Sam Gartside, who kept Damian Pedder goalless, won a crucial contested ball in the middle of the ground at the 19-minute mark, while a desperate spoiling attempt from Robbie Maisey, just when Omeo Benambra had opened up a pocket in attack, hit the big man’s head as he sprinted with no sight of the ball, forcing the ball out of bounds and allowing the Bulldogs to reset. 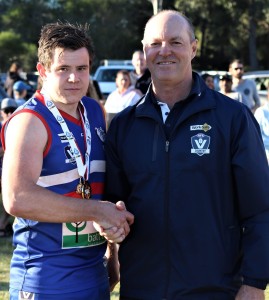 Omeo District FNL ladder and leading goal kickers after Round 15