Fish Creek travelled to Meeniyan for the last round of the home and away to take on the Demons who have clearly been the most improved side in the competition in 2019.

The Kangaroos, missing some key players, knew they were going to be in for a serious challenge and the game did not disappoint at all. A free-flowing match in front of a large and vocal crowd for the TAC Towards Zero Round that saw the respective captains Justin Smith and Tom Corry wearing the number 0 on the back of their jumper for the match.

An exciting opening quarter that went goal for goal through the early part with Fish Creek’s Shaw carrying on his great recent form in front of goals, it wasn’t until late in the first that the Kangaroos with back to back goals to Smith and Staley were able to put a small gap in the scoreboard heading into the first change 16 points up.

Two goals apiece in the second quarter with still neither side able to get any real advantage. Fish Creek captains Smith and Harfield Park were showing the way for their club while Stewart and Corry were very active for the MDU side also. The margin remained at 16 points at the half. The second half continued to be a tight affair, neither side able to get any real advantage and it was just a case for the Kangaroos of matching the Demons’ challenge, who were effectively playing their elimination final in the game needing a good win to keep them in the race for fourth spot pending the result of the Toora/ Stony Creek match.

Big Sam Edwards for MDU was proving a handful up forward and he kicked a couple of monstrous 60m goals during the day. The opening two goals of the second half for MDU had the margin back to four points within the first five minutes and with the crowd sparked again it was game on. Fishy stemmed the flow and worked their way into the quarter again and a John Danckert goal gave his side a little bit of breathing space once again.

MDU would not be denied however and back to-back goals again to Hawkins and Edwards levelled the scores at 57 apiece at the 19-minute mark of the term. Enter Jordan Shaw for the Kangas and two late goals to him once again gave his side some breathing space with a 13-point lead at the final break.

The last quarter got underway with MDU getting the opening goal about eight minutes in via a free kick to McMillan that had the banter between the crowd at the social club end at a high. Minutes later the rain arrived and with MDU pressing again, the Kangaroos used the rain to their advantage slowing the play and when Shaw got his sixth goal of the day via a beautiful pickup of the slippery ball at full speed, his snap once again gave his side a more than two goal lead mid-way through the quarter. From there the Kangaroos controlled the game as they needed to lock it down and get the win in the end by 14 points.

Undermanned yet unresolving, Toora have fought with a wounded side to face a Stony Creek side that was hot to trot.

Dylan Zuidema wearing the newly famous zero in support of bringing the road toll to zero, played a stand out game in the ruck and put in a big effort throughout the day.

He was taking on the combined forces of Ben Scammell and Lincoln Toner interchanging in the ruck.

Zuidema’s work aligned well with Darcy Atkin setting up a handful of goals.

Justin Marriott also thrived off the handy work of the ruckman, taking on the game with his pace and calculated vision.

Hayden Egerton was the primary goalkicker, he earnt himself two, but with more accurate kicking could have made more. Toora fought for their survival. After a questionable decision handed a player from each side two week’s suspension, a third player, from Toora was sent off – for abusing the umpires.

Both players will be contesting their prescribed sentences at the tribunal this week. Losing his tagger - Toora’s tightest defensive player Jonathon Pintus - opponent Darcy Aitken made the most of the third term for the locals.

On the wings, the battle of the number twos was alive between Stony’s Tait Sabec and Toora’s Peter Grant. The dominance of Sabec showed with his leg speed, but with the substantial work rate of Grant in challenging conditions - it was hard to separate the pair.

Mat Baxter played a strong game; roving forward he collected a number of marks, but often found himself too deep to hit the Toora scoreboard.

Finishing with a list of injuries for the home and away season, Toora will seek relief from the tribunal, or risk losing one of their most valuable defenders for the final against Fish Creek on their own home turf.

Foster achieved an impressive win heading into finals, defeating Tarwin handily and spoiling opposition players Nick McRae’s 300th and Travis Cameron’s 350th game celebrations. The Tigers held the Sharks to just one goal for the first three terms, completely dominating for a 101-23 win away from home. Player-coach Brad Rooney was happy with his team’s adherence to the structures and gameplan.

“I think it was just about being well set up and our structures worked really well,” he said. “The boys are taking note that you’ve really got to be in top of it come this time of year.” It was their midfield structure which dominated the game from the outset. Neville and Clark were in strong form for the away side, winning the ball consistently and giving their team many chances up front with their clearance work.

The home side struggled to cope, with Foster piling on scoreboard pressure and locking the Sharks in their defensive 50, leading to a 6-36 quarter-time score. “We took ascendency in the middle and really controlled the game around stoppages through that,” coach Rooney said. “Nev and Clarkey were good in the middle and I think they got on the end of a couple as well to finish off their hard work, which was pleasing.” Foster continued their relentless play in the second term, holding Tarwin scoreless through the quarter with strong on-ball pressure, and giving Granger, who had five goals for the day, multiple opportunities. This resulted in a 64-6 half-time lead. Tarwin tried to withstand the onslaught in the third term, but again to no avail, as Foster continued their efficient play. Their ball skills, combined with their intense pressure, were too effective against the vulnerable home side, and created an 86-9 lead at threequarter time.

“I thought the skills around the ground were as good as they have been,” coach Rooney said. “It was definitely the best aspect of our game.”

Tarwin managed to play their opponents more evenly in the final term, with both teams being held to two goals for the quarter. It was not enough though and Foster came away 78-point winners. While the result ensured Tarwin the wooden spoon tag for 2019, top spot Foster will now use their week-long break to prepare for their SemiFinal against the Maroons. 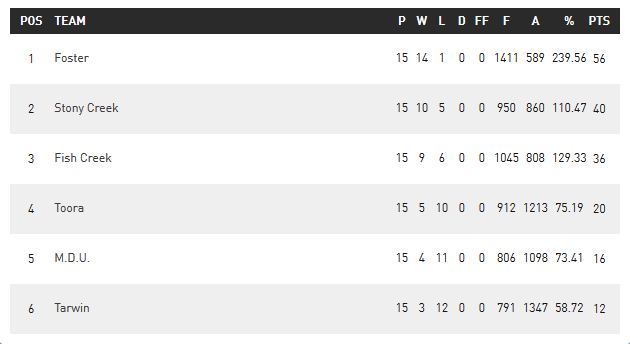 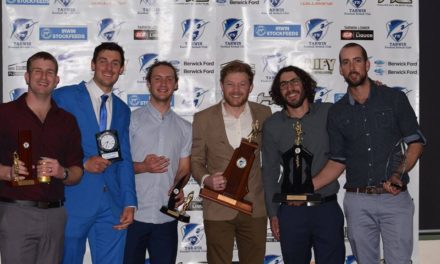 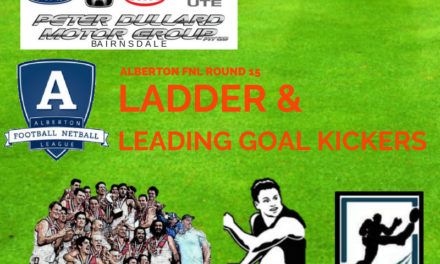