The Redlegs asserted their authority early and bolted out to establish a 12-point lead at the first break.

The margin was extended to 35 points at half-time as the Hawks were left to rue missed shots on goal with one major from seven scoring attempts.

The home side kept the visitors at arm’s length for the rest of the day, finishing the third term with a seven-goal lead.

Shaun Wyatt kicked five goals for Bairnsdale in the win while singles went to 10 others.

Sam Clebney and Tom Barr kicked two each for Drouin.

DESPITE not kicking a goal in the first half, Maffra overcame a determined Morwell to win by 27 points and maintain top spot on the Gippsland League football ladder.

The Morwell press frustrated the Eagles, who struggled to find clear avenues to goal. Leading at half and three-quarter times, the Tigers couldn't maintain their intensity in the final term.

With last week's best-on-ground Michael Coleman out of the side, Kade Renooy provided good run off half-back to try and break the Morwell press.

Jack Johnstone won plenty of contested possession through the midfield and half-forward for the four quarters.

In the absence of Kieran Jones, James Read more than acquitted himself in the ruck.

Sam Pleming returned to the side to again provide a strong influence at centre half-back.

Andrew Petrou was the only multiple goal kicker on the park, finishing with two.

Morwell had more of the ball in the first quarter. When they lost the ball, the Tigers were able to get players back to prevent the Eagles from moving forward fluently.

Neither side kicked a goal in the first term, with the Eagles kicking three behinds and the Tigers two.

It took until the fifth minute of the second quarter for a goal to be kicked. Morwell claimed the lead when Isaac Abas goaled following a free kick.

The Tigers' lead became 10 points when Joel Soutar's goal ended a good run of play out of defence.

The Eagles were struggling to hit targets in the forward line, with the Tigers playing well in the back line to not allow the home team's attack to function properly.

Cody Macdonald sent the ball into Morwell's forward line and following a pack mark in the goal square, Dan Musil booted a major to give the Tigers a 16-ppint lead at the main break.

Maffra lifted its intensity in the second half, and eventually wore Morwell down.

Mitch Bennett takes a mark in the forward line.

The Eagles kicked their first goal of the match four minutes into the third term. Petrou's goal was set-up by a Johnstone contested mark.

The Tigers were still making it hard for the Eagles to kick goals, with defenders taking intercept marks. Needing to kick the next goal, a long kick from Alex Carr found Lachlan Channing, whose major reduced the margin to five points.

With the Tigers tiring, the Eagles were beginning to open the game up.

Maffra could have gone into the final change in front, but a mark was taken in the forward line just after the siren.

A goal from Mitch Bennett levelled the scores early in the final term. A behind soon after gave the Eagles their first lead since the beginning of the second quarter.

The momentum was with the Eagles, and they didn't look back after goals from Petrou and Pleming.

Quick movement of the ball continued to pay off when Daniel Bedggood and Alex Carr booted goals.

Kuiy Jiath and Tyler Hillier were dangerous in the forward line for the Tigers, while Nathan Noblett was effective in defence.

With Traralgon fielding a young side, the Magpies knew the Maroons would be fleet of foot.

The match began at good pace, with Traralgon forcing Sale to turnover the football on numerous occasions in the first quarter, something that would become a consistent factor in the Magpies' play. Still, the Magpies led at quarter-time by a goal.

Again in the second quarter, the Magpies were not using the ball to their typical level. Combining this with shallow entries and poor kicking at goal, the sniff Traralgon needed was there.

The Maroons turned every opportunity they could into forward 50 entries, but, more importantly, kicked straight.

Although Sale had the majority of the play, the seven-point half-time lead didn't do justice to a team which had possessed the ball most of the game.

The lackluster first half culminated for the Magpies in the third quarter.

Traralgon kicked a couple of goals by spreading the Sale press, enabling an easy over the top advantage on both occasions.

The renowned Sale pressure was off with the Maroons effectively setting up the game kicking six goals for the term.

With a 20-point margin in front of the Magpies, coach Fyfe urged his players at three-quarter-time to take the game on.

Fyfe kicked the first goal for the final term, but as had happened all day, the Maroons found a goal almost immediately.

The Magpies pushed hard to the end, with their prime movers Luke Williams, Jayden Allison and Will Leslie beginning to take control, but again the form of the day continued with errant decision making and poor execution leaving the Magpies five points short at the final siren.

Incidentally, the Maroons' only point for the day was a touched behind on the goal line. In contrast, the Magpies had nine scoring shots in the fourth term, for three goals and six behinds.

Picking the best players was a tough task with Sale only having a few players play to their typical high standard.

Leslie was important in the midfield with plenty of clearances and finding the ball on the outside, he looked at times like he was going to open the game up.

Jack Lipman was the dominant big man on the ground, while Jordan Dessent was reliable in tight.

Brad Dessent kicked three goals but again it was a day of what if for the forward. A few marks not quite sticking and the numbers behind the ball making it tough at times.

Mitch and Nic Dowse applied plenty of pressure, while Jackson Glenane was solid through a variety of roles, but again there were a number of Magpies down on the day.

The win handed back the Peter Hug Memorial Cup to the Maroons and kept their slim finals chances alive, while the loss dropped Sale back to third behind Moe on percentage.

There was just one kick in it at half-time as the Lions' seven-point lead was cut back to six points.

The visitors tore away in the third term with five goals and two behinds to Wonthaggi's one goal and three behinds for a 29-point advantage at the last change.

The Lions slow down in the last term and added another three goals and five behinds to record an impressive 45-point win.

Thomas Long finished with four goals for Moe in the win while Tristan Gum kicked three and Bernie Vince and Hayden Prestidge two each.

Darnell Grech, Joel Bragagnolo and James Blaser featured in the best on ground honours for the Lions. 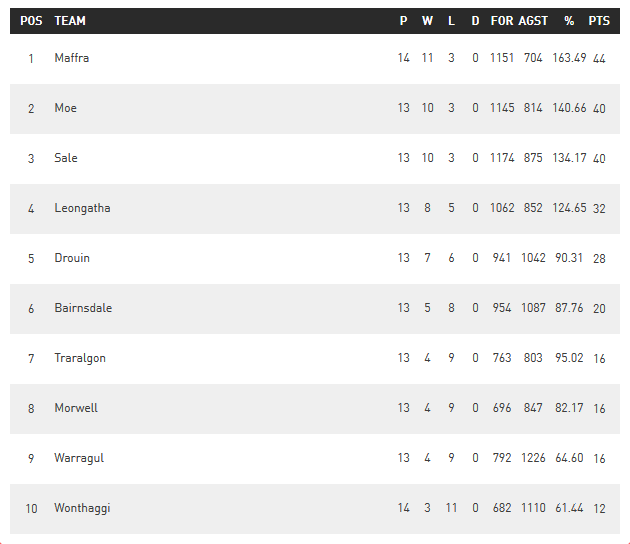