Heyfield ended a week in which it was stripped of four premiership points on a high, by defeating Cowwarr.

The penalty from the league put a question mark on the Kangaroos’ participation in the finals, but Saturday’s 83-point win has ensured their season will continue post-round 18. The Kangaroos hit the ground running, kicking five answered goals in the first term to lead by 36 points at the break.

A five-goal to two second term extended the visitors’ lead to 54 by half-time.

Veteran Adrian Cox stood out for the Kangaroos, Charlie Driffield troubled the Cowwarr defence, Nick Dinsdale provided quality ball use along the wing, while Jack Woodland was again solid in the midfield.

Thirteen goals from the boot of power forward Ben Kearns helped Churchill to the biggest win of round 16 at the expense of Glengarry on Saturday, 36.23 (239) to 2.3 (15).

The day started as expected with the Cougars 46 points clear at the first break.

The pain continued for the Magpies who were allowed a solitary point in the second term to Churchill's 11 goals and six behinds.

The lead blew out past the 100-point mark early in the third quarter - another scoreless term for Glengarry and another eight goals and six behinds for the Cougars.

With a 171-point lead up their sleeve, the Cougars didn't let up in the run home and added another nine goals and six behinds to complete the rout and run out 224-point victors.

Among the best for Churchill in the win were Kearns, Williams, Cain Iorangi and Slater.

Bombers coach Michael Duncan once again led Traralgon-Tyers United to an emphatic win at the weekend, bagging seven goals on the back of 12 last week to put Gormandale to bed, 18.26 (134) to 5.4 (34).

The odds were stacked against the winless Tigers before the first bounce and the Bombers wasted no time stamping their authority on the game.

TTU kept the home side to no score while piling on seven goals and six behinds of their own to lead by 42 points at the first break.

Gormandale broke the drought in the second term and added two goals to their tally while TTU squandered shots on goal and added two majors and six behinds.

With 53 points breathing room heading into the third term, the Bombers added another five goals and nine behinds while keeping Gormandale to no score.

The last quarter, while a mere formality, was the Tigers' best for the day as they added three goals and three behinds to fall by an even 100 points.

Justine Savige and Tyler Mustoe were the other multiple goal scorers for TTU and finished with two each while singles went to seven others.

Gavin Swan was the only multiple goal scorer for Gormandale and finished with two.

Rosedale was tested by Woodside at home, but a strong second half gave the Blues a 79-point victory.

Riley Atlee stood-out for the Blues on the ball, making the most of Jake Pawley's ruck work, while Tom Anderson worked well on the wing.

Sam Tudor was part of a rock solid Rosedale defence.

SALE City's hopes of making the North Gippsland football finals were killed off on Saturday, when the Bulldogs were thumped at home by reigning premier Yarram.

While the Demons remain a chance of claiming the minor premiership, just a win off top side Churchill, the Bulldogs are two wins outside the top five with two rounds to play, but have a vastly inferior percentage compared to Rosedale and Heyfield.

The home side went into the match on the back foot, making nine changes from the previous weekend.

Demon Jack Moore kicked the first of his five goals for the day in the opening minutes of the match.

The Bulldogs got back on level terms straight away - a centre clearance from Mitch Evans resulted in Jamie Campbell kicking a goal.

The Demons had repeated entries into their forward 50 metre arc, as they prevented the Bulldogs from getting the ball past the wing.

The visitors were eventually rewarded when Wellesley Jenkins goaled following a free kick, giving the Demons a 16-point lead midway through the first quarter.

Liam Farley, Bruns and Moore added to the Yarram goal tally, as it took a 35-point lead into quarter-time.

Yarram remained in control, kicking five goals for the second term as Joel Safstrom and Evans kicked the Bulldogs' final majors of the match.

The Demons' 54-point lead at half-time stretched to 95 by the final change, as they kicked eight goals and kept the Bulldogs goal-less.

Sale City added just four behinds to its tally during the final term, while Yarram kicked 5.3.

Moore was supported in the Demons' forward line by Ben Vardy and Louis Rodaughan, who kicked four and three goals respectively.

The Demons got plenty of drive from its onball division, with best-on-ground Griffin Underwood, Bruns, Farley and Dan Vardy rarely giving the Bulldogs a sniff.

For the undermanned Bulldogs, the efforts of Troy Carstairs in defence and captain Ben Chivers in the midfield could not be questioned. 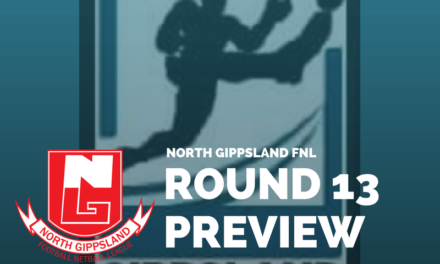 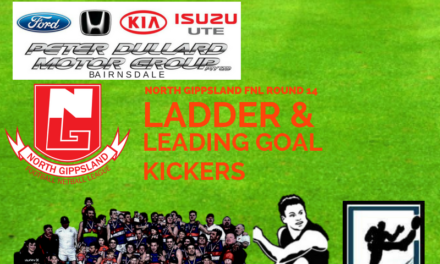 North Gippsland FNL ladder and leading goal kickers after Round 14