Click the image to view on the official league webaite

Leongatha have made a statement and flown into the top two after destroying Moe on Saturday.

The Parrots produced a four-quarter effort at home to come away with a 114-point win and send shockwaves through the Gippsland League. Coach Paul Carbis was thrilled with his team’s performance in a game where they wanted to make their presence felt.

“It was a really pleasing result,” he said. “We knew we had our best team for a while, and it was time to make a statement; we wanted to prove something.”

The home side started the game in a dominant fashion and never looked back.

They turned up the pressure and ensured quick ball movement, overwhelming the Lions. The game was all but over by half-time, with the Parrots leading 84-21 .

“We had to pressure the live play and keep them off the ball,” coach Carbis said.

“We knew we had to keep the ball off them as well and we made sure to move it fast, which helped the forwards and helped us get a result.” Two of these forwards were Chris Dunne, who had five majors, and Cade Maskell, who had six following his strong performance a week prior. These two led the way up front and helped their side to a significant lead.

“Cade’s been in some great form and the forwards are really following his lead,” coach Carbis said.

“Dunney was moved up front and paid us back too, so it was good to see him get some reward.” It wasn’t just the forwards playing their part though, with the defence and midfield applying pressure to their Moe opposition and creating continuous turnovers.

By three-quarter time, after holding Moe to just a goal for the whole of the third term, Leongatha led 115-27.

The momentum continued on in the fourth and the home side came away with a 153-39 win and a huge percentage boost.

“The defence was great for the game and they forced turnovers to give us scoring opportunities,” coach Carbis said.

“You could tell the boys were enjoying it and were keen to keep the momentum going.” The Parrots will now take on Bairnsdale away from home this week in an attempt to consolidate a top two spot for finals, a matchup Carbis ensures they won’t take lightly.

“Our work isn’t finished. Bairnsdale aren’t easy to beat at home so we’re going to have to have our wits about us to get the points,” he said. If the team can win that, they will be primed for a strong finals run.

Maffra put one hand on the Gippsland League football minor premiership after a dominant display to defeat Drouin on Saturday.

Thanks to its win, and losses for Sale and Moe, Maffra is now a game clear on top of the ladder heading into the final round, and has a sizeable percentage lead on its rivals.

Facing a team which cannot move from fifth place, the Eagles kicked the opening three goals, with Daniel Bedggood a focal point in attack.

Against the run of play, Bailey Beck received a favourable bounce of the ball before kicking the Hawks' only goal of the first term.

Maffra still had most of the possession, but the Hawks, putting more players back in defence, were able to prevent the home team from scoring. This was helped by the Eagles not being effective when kicking the ball into their forward line.

The Eagles led by 16 points at quarter-time, but the deficit was reduced to 10 in the opening minutes of the second term when Rhys Salter kicked a goal for the Hawks.

The Eagles responded when Tom Jolly goaled following a turnover.

Salter had his second goal a minute later after Maffra couldn't clear the ball from its back line.

Trailing by 10 points, that was as close as the Hawks would get for the rest of the match.

Kade Renooy was rewarded for a tackle with a free kick, which he converted to a goal.

A clever handpass from Danny Butcher in the centre of the ground allowed Renooy to set-up a goal for Jack Johnstone.

The highlight came when young debutant Thomas Bradshaw struggled off an opponent and kicked a goal on the run, to which all his teammates gathered around to celebrate.

Johnstone was on the end of the Eagles linking play in the midfield, kicking three consecutive goals to put the hosts 47 points ahead at the 23-minute mark.

A chain of quick handpasses resulted in Bradshaw kicking his second goal.

Majors from Jolly and Johnstone completed a 10-goal second term for the Eagles, who led by 67 points at the main break.

The Hawks kicked the first goal of the third term, but the Eagles kicked the final five to lead by 91 points at three-quarter-time.

The damage continued in the fourth quarter as the Eagles kicked five goals to two to push the margin beyond 100 points.

Johnson was outstanding in attack, kicking seven goals for the Eagles, with four each from Bedggood and Jolly.

The work of Lachlan Channing, Ed Carr and Kade Renooy through the midfield was integral to the Eagles booting a large score.

Bairnsdale blew Warragul out of the water in the second half on Saturday to record its sixth Gippsland League victory of the season. After an engaging first half the Redlegs led by two points, but hammered home 11 goals to six in the second half to claim a 32-point victory.
Bairnsdale coach, Darren Martin, said a change in game style contributed to the win.
“We were more man on man and it really worked for us,” he said.
“The win highlights the fact that we are no way the worst team in the competition.
“I just think we have tried to play a game style that is very hard to play when there are so many different players coming into the side all the time.
“A more simplistic approach was to just go man-on-man at certain times.
“When we have the footy we want to run and create, but at Warragul kick ins we went a bit more man-on-man and it certainly worked for us.”
While the Redlegs held the lead at the main break, they were made to endure multiple heavy assaults from the Gulls, who had three more scoring shots in the opening half.
“They let us off the hook,” Martin said.
“They kicked a few points in the second quarter when they had their 10 minutes of ascendancy, but our back line put them under a lot of pressure.
“They kicked about four or five points in a row and we were able to do what normally happens against us. We went down the other end and hurt them for bad kicking.
“It was very tight at half time and I felt like our guys were really in the hunt, which stemmed from a really good day.
“We had a bus trip there so everyone was down there half way through the fourths. Our fourths beat the top team and then our thirds did the same thing, while the undermanned reserves did a great job.“
Martin contributed his team’s second half resurgence to a concerted team effort.
“The third quarter was very exciting football from a Bairnsdale perspective,” he said.
“Dylan Somerville played at centre half forward this week. He has played key back all year so we freed him up now that finals is out of reach and he created so much for us.
“Ethan East, who is really playing on one leg, was that target deep forward. Once Brayden McCarrey, who was also playing on one leg, got a sniff of the goals he was unstoppable. We looked very dangerous.
“I really put it on Liam Giove during the week that he has been down in the last few weeks, but he responded magnificently. He was clearly our best player.
“His work from the stoppage was just unreal. He would have laid 10-15 tackles and cleared the ball from the congestion over and over again.
“I said after the game if it was an under 12's game it would have read in the paper that it was a great team effort.
“Ricky Tatnell went back. He has been shouldering a lot of responsibility up forward. Having him and Kieran Vickery on the back flank gave us drive.
“I know (Ben) Hughes kicked six, but Brayden Radford did a great job on him. Will Hamilton, Daniel Preston and Paul Bills were just so solid.”

Wonthaggi Power did their hopes of escaping from the Gippsland League next year no good when they soundly outplayed one of the big city teams of the competition, Sale, at Wonthaggi on Saturday.

It was a stirring performance on Saturday, led by Aiden Lindsay, Jordan Staley and Ben Eddy out of the centre but with a better avenue to goal, stronger defensive unit and a forward structure that always looked likely to produce more than the visitors on the day. Power started the best with a four goal to two opening quarter, but Sale hit back to lead by seven points at the break.

And it was the Power who flipped the switch in the third with six unanswered goals, the first by Ben Eddy after several minutes in the Wonthaggi scoring zone. Tom Murray cleared the next centre break to where Will Lenehan marked well and put the home side in front. Sale’s Jamie Sweeney kicked like a backman after marking close to goal and with Jordan Staley winning in the ruck and around the ground, Elliot Staley, Tom Harley, Tom Davey and Kane McCarthy all in the play, the next goal by Ben Eddy really hurt.

Eddy lined up the shot, 45 metres out on the boundary and his kick never deviated. Terrific work by Josh Schulz through the hands of Harley and Jordan Staley on the lead, set up Chris McLean with a centred pass for another and the Power had established a winning break.

Pressure on the Sale players was first class, a fact remarked on by coach Rowe at the break, singling out Kye Benson for his chase, and there were no Sale goals in ‘red time’, another tick from the coach.

The Maroons had the bulk of the play in the first term and capitalised, holding the hosts to two behinds to lead by 12 points at quarter-time.

The Tigers found their first major in the second term but it came with another three behinds while Traralgon added two straight to extend the margin to 15 points at the main break.

Morwell continued to misfire on goal in the third quarter, matching the visitors for shots on goal but finding themselves 15 points in the red at the last change.

Accuracy finally found the Tigers in the last quarter, scoring three goals for their best term of the day only to fall one straight kick short.

Dylan Loprese and Riley Loprese kicked two goals each for Traralgon in the win while singles went to Jacob Van Iwaarden and Cameron Whiteoak. 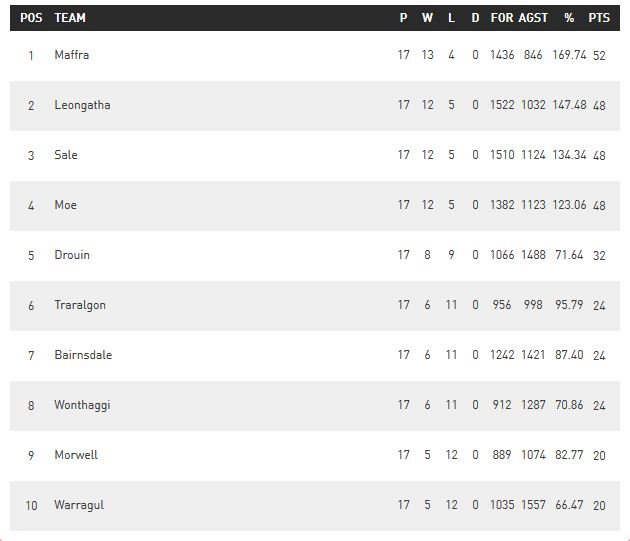 LEADING GOAL KICKERS AFTER ROUND 17