The 2019 NAB League season continued for engie Gippsland Power with another close game but, unlike round one, the boys were unable to hold on and lost narrowly to arch rivals, the Dandenong Stingrays. After playing some strong team football in their first match, expectations were high that they were well prepared for mental and physical challenges needed to be competitive against the Stingrays.

One negative for the Power was the fact that youngster, Sam Berry, who had made a stunning debut but was missing due to injury. On a more positive note, AFL Academy member, Caleb Serong, was available after missing the first match due to school sport commitments. As an added bonus, Traralgon’s Flynn Shields was another addition to the squad and it meant that the side was getting close to being near full strength for such an important match.

Weather conditions at Morwell were very different compared to the pre-season and first round with rain and a cold wind putting both sides under pressure. Despite this, the crowd was one of the biggest ever for a Power game and the Stingrays got their supporters going when they kicked the opening goal for the match. Both teams were applying strong pressure and Kyle Dunkley used his strengths to set up Sam Flanders for the team’s reply.

The Power were applying their trademark pressure in every contest and Harvey Neocleous used his pace and astute reading of the play to give the side the lead well into the term. Instead of maintaining this momentum a costly fifty metre penalty by the Power “gifted” the Stingrays with their second goal. To add insult to injury, the Stingrays were given another “freebie” after the Power defenders turned the ball over with a series of poor decisions and even worse skills.

Instead of going to the first break ahead, the Power were seven points down after ensuring that the Stingrays had two undeserved scoring opportunities which were almost against the general run of play for much of the quarter. Once again, the Power were using their unique brand of intense pressure to control the Stingrays ability to set up play and Will Papley won, and effectively used a hard-won, free kick to reduce the margin to a point.

Will then used the same hard-nosed qualities to win another free kick and fifty metre penalty and go on to kick another and to the Power ahead again. Almost on cue, the Stingrays hit back from a free kick and it inspired the Power to up the ante and consistently go into attack. Instead of kicking goals, they began to miss gettable opportunities and then added to the problem that this created by “gifting” the Stingrays with another goal after more indecisive defence.

Late in the quarter, sanity prevailed and Neocleous and Jake Van Der Pligt combined to allow Charlie Comben to kick a vital goal that put the side a few points up at the long break. Rhett and his assistants had lots to “discuss” with the boys and the inability to kick long from defence was an obvious issue after poor skills and decisions had cost the side three goals already. On a very positive note however, the pressure that they were applying was intense and the Stingrays were unable to get any system into their play.

It was the Stingrays who took the initiative early in the quarter with two quick goals and once again the Power found themselves having to work even harder to regain the lead. They were consistently in attack and once again, Neocleous had a chance to put his stamp on the situation with one of his “specials.” As if inspired, he hit a pack at top speed again and scored his third with his brand of clever forward play.

Just when it looked like they were going to finally get control of the play, the defenders started to go short and put each other under totally unnecessary pressure. The Stingrays were happy recipients of the resultant scoring opportunities and finally took the lead after kicking a goal from one of these “gifts.” It was obvious to everyone except the boys, that they should have been at least four goals ahead due to their hard work but totally unnecessary decisions had kept the Stingrays in the game.

As the result of a free kick, Harry Pepper regained the lead for the Power and, once again, they were seemingly dominating much of the play due to their hard work and constant and intense pressure being placed on the Stingrays. Some of this pressure in the forward line resulted in Mason McGannon winning the ball and he snapped a stunning goal from deep in the pocket. A rebound goal by the Stingrays put them back in the game and the pressure was back on the Power to regain the initiative.

More scoring opportunities were wasted by the Power when they needed to use them the most and the Stingrays capitalised on such ineffectiveness to score the goal that gave them a six point victory by the final siren. It will be remembered by the boys as a game that they really deserved to win based on their work rates against a top side but, crucially was lost by an inability to use simple defence rather than fancy, short disposals.

One of the key factors in the Power’s ability to apply such intense pressure on the Stingrays was the side’s midfield unit. Leading the way was Sam Flanders who used his uncanny ball handling skills and ability to read the play to win and effectively use many possessions. He was constantly at the bottom of the pack doing the hard work for teammates. In defence, Tye Hourigan again led by stellar example with his unique ability to make the right decision in every contest. This meant that he was never beaten one on one in the vital interactions with the Stingrays best forwards as well as backing himself to win and use the ball himself.

Caleb Serong was another midfielder who worked tirelessly to win critical possessions as well as applying pressure on opponents. His ability to be in the right position and make the key decisions was invaluable and he totally nullified the impact of key members of the Stingrays on-ball unit. Power captain, Brock Smith is another who doesn’t need a title to be an outstanding leader. He plays unselfish team-oriented football and is always ready to do the hard things to protect team mates as well as apply his brand of extremely intense pressure on key opponents.

After missing two seasons with the Power due to niggling and frustrating injuries, Sale tall player, Charlie Comben used his aerial skills to full advantage as a key forward and in ruck contests. However, he was equally as effective in the contests at ground level and indicated that he is ready to be a vital element in the side’s prospects this season. Ben Maslen had a few games in 2018 and has really stepped up to the mark this season. He has worked very hard to improve his fitness as well as backing himself to play a significant role in the side with team focused and disciplined football. The self-belief that he has gained as a consequence of his focus is becoming more important each week. 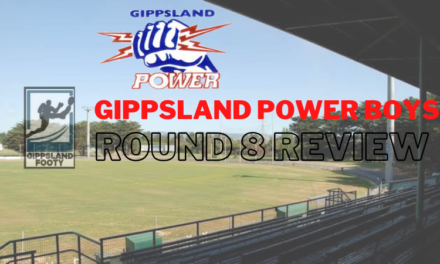