If you are unable to see this, click image

A desperate Maffra held off Traralgon to earn a spot in a third successive Gippsland League football grand final.

At a wintry Moe on Saturday, the Maroons kicked the only three goals of the final term of the preliminary final, but the Eagles won by five points, 7.10 (52) to 7.5 (47).

The Eagles will play Leongatha for the premiership this Saturday at Morwell.

While rain, wind and, at time, hail, were not conducive to free flowing play, the Ted Summerton Reserve surface held up well.

Leading by 22 points at three-quarter-time, the Eagles were in control of the contest, but the Maroons were playing well enough to make a charge during the final term.

Chris Urie reduced the deficit to 16 within the opening minute of the quarter to give the Maroons the spark they needed.

Similar to what happened during the second half of the second semi-final against Leongatha, the Eagles were being forced to kick long into attack, with the Maroons able to prevent them from hitting targets.

The Eagles’ desperation stopped Traralgon from getting the ball into the Maroons’ forward 50 too often.

When a kick from Daniel Bedggood hit the post, the Eagles led by 11 points at the 16-minute mark.

The ball was in Maffra’s forward half for much of the quarter, but the finish became tense after Adam Jaensch kicked a goal from a free kick during time-on — making the margin four points.

With the ball staying in their forward line, the Eagles had chances to kick a major, but the conditions made long kicks for goal difficult to get on target.

With Maffra working hard to keep the ball in their attacking half, the siren sounded with the Eagles five points ahead, but to the relief of their players and supporters.

Maffra set the pace earlier, kicking the only five goals of the first term to lead by 33 points at quarter-time.

Bedggood was gifted the first goal from a 50 metre penalty.

Michael Coleman’s run from defence sent the ball to Andrew Petrou, who passed to Daniel O’Brien, who handpassed to set up Kade Renooy’s goal.

The pressure the Eagles had in the first half of the semi-final returned, but coach Wayne Butcher wanted a four-quarter effort this time.

However, the Maroons came back into the contest during the second term, kicking the only three goals — including two from Loprese — reducing the margin to 15 points by the main break.

The Eagles returned to their form of the first term during the third, beginning with Petrou’s goal from the forward pocket.

The Maroons held firm in defence, before Northe kicked a goal against the run of play.

Johnstone showed poise under pressure to set-up a goal for Tom Jolly late in the quarter, giving the Eagles a 22-point advantage — that lead proved to be enough for the Eagles.

Kieran Jones was outstanding for the Eagles in the ruck, and around the ground with his marking.

Coleman was also solid off half-back, often drifting forward to kick the ball into attack.

Midfielder Ed Carr, Jack Johnstone and Alex Carr relished the scrappy conditions, while Bedggood got the Eagles going in the forward line.

Loprese stood-out for the Maroons, kicking three goals, Connor Ambler played well in the midfield, while Mark Collison was part of a stoic defence. 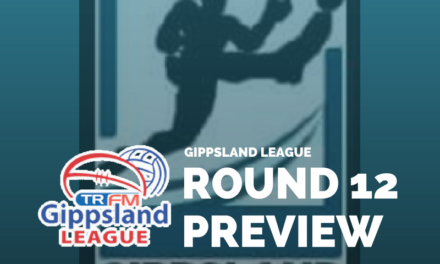 Gippsland League ladder and leading goal kickers after Round 12