The home side was reeling with just a solitary point to the Maroons’ two goals and one behind at the first change, trailing by 13 points.

The deficit was cut back to just a point at half-time before Moe piled on three goals and four behinds to lead by 13 points at the last change.

The Lions had opportunities to put the result beyond doubt in the last term but were restricted to five behinds to finish 16-point winners for their fifth consecutive victory.

Tristan Gum was the only multiple goal scorer for Moe in the win and finished with two while singles went to Josh Galea, Ben Morrow, Tom Long and Wade Anderson.

Among the best for Moe in the win were Jayden Van Dyk, Ben Maslen and Tom Fleming.

The Tigers and Redlegs were inseparable all day with the lead chopping and changing with the home side gaining the early edge by a solitary point at quarter-time.

Neither side found the big sticks in the second term but Bairnsdale wrestled back the lead with five behinds to the Tigers' one to lead by three points at half-time.

Scores were level at three-quarter-time, 28 points apiece, and while the Redlegs managed one straight goal the Tigers added one goal and three behinds to clinch the win.

Ruckman Dan Musil was among the best for the Tigers, as were Anthony Rosato, Max Linton and Hecker.

Warragul made Drouin’s bid for the finals a little bit harder with a wellearned win in tough conditions at Drouin on Sunday.

The Gulls won the always hard-fought neighbourhood derby 9-10 to 6-10.

They did it because they played the conditions better – a strong cross wind throughout, rain for most of the game and a slippery surface.

And it was very gloomy – dark even for the second half despite the ground lights being on.

Even in the first half when Drouin kept in touch, Warragul played a bit better and took a five-point lead into half time.

The lead had changed briefly a couple of times.

Warragul played the basics better in the wet, windy and muddy conditions.

The Gulls’ players committed to contests, got boot to ball quickly, were more positive and covered the ground faster.

And the defensive structure repelled Drouin time after time.

Another big plus for Warragul was that it won without two of its best players, Luke Tynan and Kim Drew, late call ups for VFL duties with Casey Demons and Frankat ston respectively, as well as first choice ruckman Sam Whibley (injured).

Drouin certainly missed coach and assistant coach Jordan Kingi and Eddie Morris around the ball but the balance of “outs” was about even.

It kicked 3-2 to the Hawks’ 1-1 to stretch the half time lead of five points to 20, a huge margin in the conditions.

Drouin paid heavy prices for penalties near goal, Warragul coach Ben Hughes slotting through the three goals for the term.

He was a big return for Warragul after missing the previous two games.

But the Gulls had made most of the running for the quarter.

Also back in the red and black on Sunday and more than handy contributors were Matt Ross and Mason McGarrity, the latter still eligible for the fourths and a regular at Gippsland Power.

McGarrity showed some real quality for a young player and chipped in with two critical goals and Ross, also active in the forward line, kicked one.

Almost all of the Hawks goals were scrambled.

About the only exception was Tom Barr’s last quarter goal, his second for the day, when he converted after marking a Bob McCallum pass.

But by that stage the game was well over.

A kick off the ground for a goal and another from smart roving of a marking contest had put Warragul out to a game high lead of 33 points earlier in the term.

Drouin fought the contest out to the finish adding two goals and two behinds after the Gulls’ last score for the day; far too late and far too little.

Despite the defeat Drouin still sits in 5th place, three games clear of their nearest challengers but need least another couple of wins in the run home to stay there.

For Warragul the win, its fourth for the year, jumped it to be one of the three teams three wins from the “five”.

The Gulls named their best on Sunday as stand-in ruckman Dan Giardina, who had the big task of running with McCallum for almost all of the match, Nic Mulqueen, Mitch Nobelius, McGarrity, Will Jolley and di Ciero.

It was not a day for individual brilliance, rather one where those that stuck to their guns across four quarters were the most effective.

For Drouin ruckman McCallum was dominant at the hitouts a hard worker around the ground but had his effectiveness limited by Warragul’s strength at ground level.

Barr got two for Drouin and Ferguson, Ryan Taylor, Rhys Salter and Cambell Jolly one each.

Despite challenging conditions, the Leongatha Parrots put in an impressive performance against rivals Wonthaggi Power on Sunday, running away with a 63-point victory.
Hosting the Power at a very wet and muddy Parrot Park, Leongatha came out firing with a strong brand of attacking footy that they managed to keep up over the four quarters.
Kicking against the breeze in the first quarter, the Parrots managed 3.5 to the Power’s two points.
The home team’s onballers and forwards dominated, as they would continue to throughout the game, with Chris Dunne kicking two goals, and Jack Ginnane kicking one.
Increasingly slippery conditions saw things turn a bit more scrappy in the second quarter, but the Parrots still moved the ball well, which saw them dominate on inside 50s (29 to Wonthaggi’s 7), although they struggled to convert as many as they should have.
Hopkins and Nagel kicked one goal each for Leongatha, while the Power got their first, bringing the score to 5.11-41 to 1.3-9 at half time.
Quarter three was more of the same, with Leongatha still dominating inside 50s and their entire forward half.
They kicked three more goals: one to Davidson, one to Nagel, and one to ruckman Willis after a 50-metre penalty; while Wonthaggi kicked one.
By the time the final term came around, players on both sides were looking like they’d had enough of the unrelenting rain.
It didn’t help that three Wonthaggi players were playing their second game of the day, having already run out in the Reserves.
It wasn’t the best quarter to watch, but the Parrots still managed two more goals: a third from Dunne, and a first for the season from 2018 Best and Fairest Tom Marriott, in his first game back following a shoulder reconstruction.
No doubt feeling the absence of injured forward Troy Harley, Wonthaggi did their best to limit the damage of the strong Parrots’ forward line, but it clearly wasn’t enough, with the home team totalling an impressive 29 re-entries for the game, and dominating across the board.

Maffra moved to the top of the Gippsland League football ladder with a 16-point win at Sale on Sunday.

Both of Sale's losses this season have been to its local rival.

The match supported local breast cancer support charity the Footprints Foundation, with the Magpies wearing a special pink and white jumper and pink socks, and both teams sporting pink armbands.

A strong breeze across the ground made accurate kicking difficult for both teams, but Maffra adapted to the conditions better.

Sale had enough of the ball, but was let down by decisions when going into attack.

Maffra moved the ball through the middle of the ground and along the grandstand wing, which was partly sheltered from the wind, more often, and was rewarded.

The Eagles went into the match without David Adams, John Butcher and Sam Walker, but welcomed back Ed Carr.

The match was largely an even contest, with plenty of pressure, as to be expected for a top of the table clash.

It took until the seventh minute for a score, when Mitch Bennett judged his kick well with the breeze to boot a goal for the Eagles.

The Magpies responded a minute later when Hams goaled.

Scoring was difficult because of the breeze, with play scrappy at times.

The Eagles claimed what turned out to be a vital break late in the first quarter when Bennett and Alex Carr (with a long kick) booted goals to give the visitors a 12-point advantage at the break.

Sale had more of the ball in the second quarter, but was held out by a stern Maffra defence.

The Magpies broke through when John Gooch's long snap just covered the distance to the goal, reducing the deficit to five points 15 minutes into the term.

Running the ball into their forward 50, the Eagles looked set to kick their first goal of the quarter deep into time-on, but was thwarted by an errant handpass.

Their major came when Ben Brunt sent the ball to Tom Jolly, who took a good one-handed mark in a one-on-one contest. The half-time siren sounded as Jolly's kick was floating in the air on its way through the big sticks.

Despite Sale having more of the ball in its attacking area for the quarter, Maffra led by 11 points at the main break.

Both teams could only manage two behinds each during the third term.

Again, Sale had more of the ball, but struggled to find an avenue to goal through the Guthridge Parade side of the ground.

The Magpies were not out of the match, and knowing they'd need to at least double their goal tally in the final term, coach Fyfe urged his players to "take the game on".

A run of play along the grandstand wing was capped off when Brad Dessent kicked a goal off the ground in the goal square. The margin was five points, and it was game on.

However, that was as close as the Magpies got, despite their best efforts.

The Eagles were marking the Magpies' long kicks into attack.

At the 15-minute mark, Andrew Petrou kicked a goal to put the Eagles 11 points ahead.

With the Magpies continuing to push for a goal to get back into the match, the visitors kicked one on the break late, when a knock-on from Jarryd Clohesy set-up Petrou's second major.

Michael Coleman stood out for the Eagles in defence, taking intercept marks and setting up attacks.

James Read was also strong in defence, while Jack Johnstone was dangerous across half-forward.

Midfielders Ed and Alex Carr were valuable in the crucial moments.

Nic Dowse provided a strong link between defence and the midfield, Mitch Dowse was the pick of the Magpies' onballers, while Jack Lipman had the better of the ruck contests. 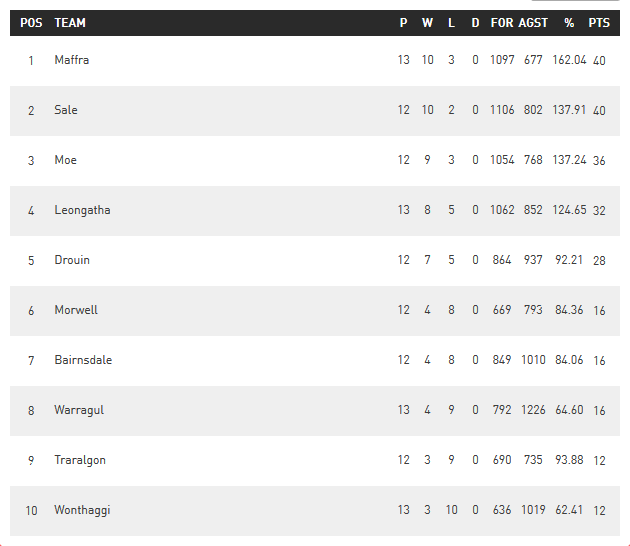 It's getting towards the of the season, so it's time to start entering your votes in to Sports Vote Count. A comprehensive and fully functional vote count and presentation program all in one, now with video capabilities. 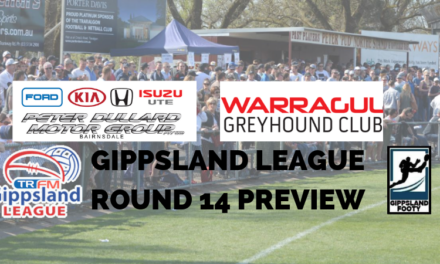