In cold and wet conditions at Warragul, Leongatha won 14.10 (94) to 2.11 (23), to book a second semi-final against minor premier Maffra on Saturday night. The Magpies will play Traralgon in the first semi-final on Sunday.

Sale was forced to make a late change with captain Kane Martin becoming unavailable on the morning of the match, replaced by under 18s player Luke Williams.

The Magpies were hoping to rebound after a disappointing loss to the Parrots seven days earlier, with Brad Dessent kicking the first goal of the match. Leongatha responded quickly with two goals.

A typical hard Nic Dowse spoil resulted in Jordan Dessent being spotted up on the lead, but what would be symptomatic of Sale’s day the shot at goal went wide.

The conditions meant the game lacked the highlights typical of this level of footy, with gained advantage by pushing the ball forward and being strong in the contest the recipe for success.

The Parrots led by nine points at quarter-time.

A down the ground free gifted Leongatha its first goal for the second quarter. Sale scrapped and competed hard, but the Parrots were taking full advantage of any opportunity they could.

The Parrots kicked three goals for the quarter, as the Magpies only managed two behinds. Sale lacked a little polish in its forward half, while at the other end, Leongatha forwards like Cade Maskell and Chris Dunne were composed and classy by foot and hand.

Leongatha took a 24-point lead into the main break.

Ill discipline and a 50 metre penalty led to Ryan Olden kicking the first goal of the second half. It was aspects like this that would cost the Magpies, with the Parrots’ composure and maturity in the contest much better.

Despite this, Sale was on top, the intensity of both sides lifted but the Magpies couldn’t put the pressure on where it was required, the scoreboard.

They would gain plenty of forward entries, but the Leongatha defensive efforts were outstanding, creating congestion by limiting Sale’s time and space.

Courtesy of a high free kick, Sale booted a goal through Jayden Allison, but the Magpies only managed three behinds in a 15 minute period  where they controlled the majority of play.

The Parrots made the Magpies pay by kicking three goals late in the term, to take a 41-point lead into three-quarter-time, effectively ending the contest.

The fourth quarter probably went as predicted, as a Leongatha side full of energy stormed home, kicking the first two goals to put a downer on  the Magpies’ day.

As the Sale bodies became weary, the intensity surrounding the contest wasn’t at the level earlier. Leongatha kicked the final three goals as Sale could only manage three behinds for the quarter.

The score was probably not a reflection of the opportunities missed and the evenness at times of the contest.

For the Magpies, Kyle Dunkley’s ball use and ability to go for the contest was a big asset. Jordan Dessent was again solid and reliable, carrying a big load through the middle of the ground, ably-supported by Brad McKay, who tried to use his speed to advantage.

Returning from injury, Nic Dowse had the better of Chris Dunne and, as always, was strong in the contest, while the defensive efforts of Andrew Quirk and Mitchell Thacker were underrated.

Jack Mapleson was classy by foot and had to be used in a variety of roles throughout the day.

WATCH THE MATCH REPLAY WITH COMMENTARY VIA THIS LINK

Traralgon have won through to the semi-finals after ending the campaign of arch-rivals Moe in the elimination final in front of a healthy crowd at Morwell Recreation Reserve yesterday, 15.11 (101) to 10.10 (70).

The Maroons were down by five points at quarter-time but regrouped in the second to score four goals to the Lions’ two to lead by one kick at the main break.

The margin was just two points in Traralgon’s favour at the last change but they came home with legs and piled on six goals to run out 31-point winners.

Chris Urie finished with four for the Maroons, Dylan Loprese three and two each went to Darren White, Jackson McMahon and Michael Burge.

Coach Mark Collison made a triumphant return to the side for his first game since round 10 and racked up 33 possessions in a leading performance. 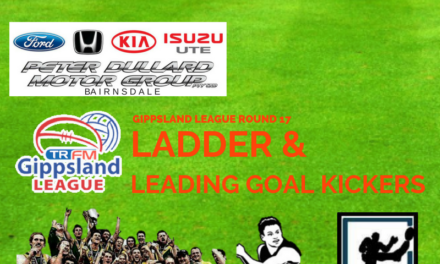