After recording a morale boosting, come from behind win against Greater Western Sydney last weekend, engie Gippsland Power upped the ante even further to win narrowly against the highly rated Eastern Ranges. In ideal conditions at Morwell, the Power went into this challenging match without Leo Connolly due to injury while Kyle Dunkley played in the AFL Legends match on the MCG.

Coming into the team were Mason McGannon and Burkeley McFarlane with the result that the Power only had five bottom agers, Will Papley, Tom Fitzpatrick, Zach Reid, Brandon McAuliffe and Tyran Rees. This meant that it was probably the oldest team fielded in the club’s twenty seven year history in this elite competition. Coach, Rhett McLennan, had been pleased with the boy’s response to the challenges last week and simply asked for a continuation of the determined role playing by each of the boys.

Neither of the sides were going to concede an easy possession in the opening minutes and, it took some excellent forward pressure by Fraser Phillips to allow him to break the deadlock. Eastern hit back after an unnecessary turnover by the Power but Mason McGarrity finished off more offensive pressure with a clever snap. Once again Eastern capitalised on an error by the Power to level the scores and neither side was finding it easy to get effective passages of play going.

Key Forward, Josh Smith, used vison, skill and poise to set up Will Papley for a clever goal but it was Eastern who seized the initiative from the resulting centre bounce clearances for two simple goals. As if inspired, Brock Smith and Trent Baldi used the ball well to set up Sam Flanders for a much-needed reply. Late in the term, Eastern were gifted with a crucial goal after a stunning umpiring decision where one fifty metres away amazingly over-ruled his colleague who was just five metres from the action.

Going into the first change Eastern led by six points after twenty five minutes of excellent pressure football by both teams. Some more of the Power’s trademark pressure resulted in a free kick to Phillips and he kicked truly from well out. Instead of building on this momentum, Power made decision making errors to waste options and, a resultant turnover was capitalised on by Eastern.

Once again the boy’s increased their thoughtful use of the ball and Phillips and Harry Pepper combined astutely to set up McGarrity for his second. As if this wasn’t enough, more clever ball use by Ryan Sparkes and Jake Van der Pligt resulted in Phillips kicking his third goal. The Power were playing great team football and this time it was Riley Baldi’s turn to join the fun  with an excellent contested mark and goal.

With only minutes to go, the Power led by twelve points but, another umpiring “howler,” reduced their lead to six points going into the long break. The large crowd had been treated with some of the NAB League’s best football and it continued early in the third quarter. More of the Power’s intense pressure and the ball ended up in Josh Smith’s capable hands. He then used his uncanny ball skills and team focus to set up Harvey Neocleous for an excellent goal.

Once again, Eastern hit back on the rebound and the pressure was right back on the local boys. For the next ten minutes, they controlled many passages of play but were unable to convert them into scoreboard pressure. Eastern, in contrast, finished off their chance and it meant that the Power only led by four points when it could easily have been five goals if they had converted their hard-won opportunities and control of much of the play during the quarter.

Consequently, the Power went into the last term under intense pressure and were like the boy with the barrow, “the job was in front of them.”  The scenario got worse very quickly as Eastern scored easily after the Power allowed them to goal with little or no pressure. Instead of responding to this challenge, they allowed Eastern to kick another and move two goals ahead and seemingly in control of the contest. To add to the mental and physical pressure that they were under, the Power missed two vital scoring opportunities and looked Eastern had the answers when it mattered most.

It took a fine intercept mark by Flanders to allow him to kick a much needed goal and put themselves within one kick of the lead. It seemed to inspire the boys and great hand skills by Tent Baldi provided an opportunity for Charlie Comben to give the side a narrow lead. He kicked truly and it seemed that the Power were finishing off the game with greater determination and fitness.

After more great defence, the ball went forward and McGarritty took a wonderful mark on the fifty metre line. He responded accurately to a good lead by Tom Fitzpatrick and he took a stunning contested mark. His goal was the last for the match and allowed the Power to runout well-deserved ten point winners in a fine game of elite junior football. If Rhett and his assistants had been pleased with the boys in Sydney, then he was justifiably elated with their effort for four quarters against Eastern.

Led by a miserly and ferociously competitive defensive unit, some intensely aggressive onballers and effective forwards, the team focus was outstanding with every-one responding to Rhett’s challenges before and during the game. He set each the task of playing their role to the best of their ability and they did so manfully. Some of the new boys in this elite competition seemed well and truly at home with the needs required and it meant that selecting the best players was very hard considering how many of them had made a significant contribution to the win.

Captain, Brock Smith did some deep soul searching recently and responded brilliantly to the challenges involved. From the opening bounce he took on, and soundly defeated, Eastern’s best forwards. His twenty six possessions were a stunning indication of this impact but it was the eight contested marks that really reflected the quality of his contribution. At the other end of the ground, Fraser Phillips was another who through himself manfully into aerial contests and took telling marks under intense pressure. He not only kicked vital goals but also contested well at ground level which ensured that the ball stayed up forward and placed the Eastern defence under consistent pressure.

Small forward, Mason McGarrity was highly competitive at ground level and was continuously in contests against the “bigger blokes.” He moved into the midfield at times and played a significant role in getting the ball flowing effectively into the forward line as well. He finished off his performance with two important goals. After missing the early part of the season due to injury, Riley Baldi returned last week and played well. However, in this match he was able to be highly competitive for four quarters and was the most important contributors in the all-important midfield contests. His ability to apply intense pressure as well as pick up twenty plus possessions defined his wonderful performance.

At 200cm Zach Reid has a “huge” advantage over opponents in aerial contests but doesn’t limit his contributions to this area. He is equally as competitive at ground level and has the ball skills of a “normal” on-baller. It’s a rare very combination of skills and size and, importantly, he is now more fully aware of how important he can be to the side’s play. Charlie Comben is another member of the big blokes club who has slowly but surely developed the self-belief that matches his considerable potential. When the game was up for grabs in the last term he was the key player for the Power with his aerial skills and fierce attack on the ball.

As mentioned earlier, Rhett and his assistants could easily have named another group of players who made the sort of contribution to those above. As is the usual pattern for these players, Josh Smith, Tye Hourigan, Ryan Sparkes and Sam Flanders applied their skills, discipline and team focus to telling effect and enabled the Power to more than match it with one of the NAB Leagues best teams. Youngster Will Papley defied his relative inexperience and was highly competitive in the tightest contests and used the ball to telling effect. 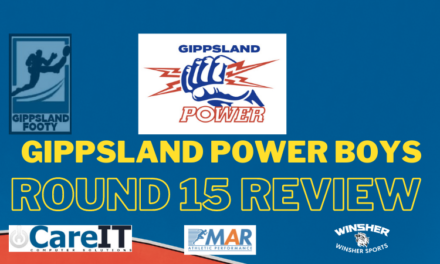 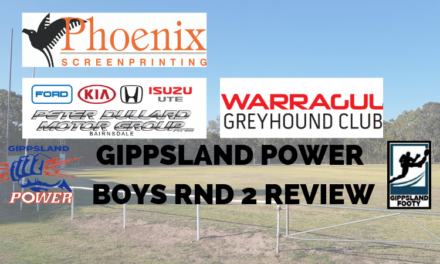