Travelling to the Peanut Farm to take on the St Kilda Sharks the Breakers weren’t bothered by the journey – getting off to a great start.

This was enabled by the strong ruck work of Sophie McCracken-Evans who was getting the ball to the Breakers mids early despite facing a much taller opponent.

With first use of the ball Poke and Russo kept driving the ball forward with Kelly O’Neill making the most of the good delivery and open forward line to kick two first quarter goals. Ella Cargill delivered the the Breakers third for the quarter via a great soccer goal off the ground.

St. Kilda dropped extra numbers back in the second making goals harder to come by. The midfield kept working hard with Lisa Scharnberg providing good run and continuing to improve each week.

The third saw St. Kilda trap it in their forward line for most of the quarter but solid defence didn’t allow them to score. A nice switch from Kate Caughey and end to end running play created by Jess Bolding down the open wing allowed Tess Angarane to convert from the goal square.

In the last quarter the Saints again threw numbers behind the ball. The Breakers were able to hold it in their half with a solid half back line lead by Chelsea Connell and Oona Shepherd. Despite peppering the goals the Breakers were only able to add one more major with Kelly O’Neill registering her fourth for the day.

Next week the Breakers take on Karingal at 10am at Cowes. In what is sure to be a great contest the 1 v 2 clash will feature before the Phillip Island Football Netball Club senior matches with the time slot vacant due to there being no junior matches. 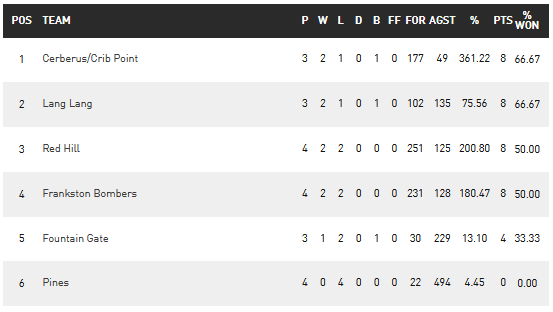