They say a week is a long time in footy. Well, just imagine how long 144 days must feel to the Cora Lynn and Tooradin-Dalmore senior players, who haven’t faced off against each other since the opening night of the 2019 season back on 23 March.

Back then, the Cobras stormed to a 45-point win on their home deck as the eyes of the West Gippsland football world eagerly watched how the Seagulls would perform in their debut game in the WGFNC.

There were plenty of question marks surrounding the Gulls, both in the lead up to that contest, and in the wake of it.

But, steadily, they’ve answered those questions.

The side coached by Lachie Gillespie on Saturday will be vastly different from the one that first took to the field in March – particularly when it comes to their mentality.

Back then, the Gulls were coming of a stint in the now-defunct SEFNL – a period in their history when they were constantly outmatched against behemoth clubs of the south east region such as Berwick, Narre Warren, and Cranbourne.

Against these sides, the Gulls all too often just had to limit the damage.

But this year, the start of their new WGFNC era, is different. They have the players with the ability to not only compete with the competition’s best, but to beat them.

And that’s what they’ve proven along the way.

They looked outmatched against the Cobras in Round 1, with the home side’s talls causing all sorts of major concerns for the visitors.

Full-forward Nathan Gardiner booted seven majors for the contest and proved to be one hell of a headache for the Gulls. He no doubt looms as one again this week, but this time, at Kooweerup, he and his Cobra team mates will be facing a confident, assured Gulls group with the knowledge it has what it takes in other areas across the ground to get the job done.

Their press and ball movement will be one such area, as will the potency of their own forwards – including the likes of Andrew Dean and Julian Suarez.

But the Cobras boast the winningest senior core of recent times in the region. With multiple-senior premiership winners throughout, they thrive at the business end of the season. Coached superbly by David Main, they’re also led brilliantly on-field by Tim Payne – whose finals record is nothing short of incredible.

Both the Cobras and Gulls should welcome a host of big names back this week.

Troy Tharle, Shaun Sparks, and Jeremy Monckton are all in the frame to return for the Cobras, while Billy Thomas should take his place in the ruck.

But the Gulls are set to be boosted by their own inclusions – Rory Hillis, Luke McKenna, and Brad Lenders.

While not a knockout final this weekend, this looms as a decisive one in showing just how serious Cora Lynn’s claims to yet another throne are, and just how far Tooradin-Dalmore has evolved.

Where is it being played?: Cora Lynn Rec Reserve

What time is the seniors game scheduled to start?: 2:00pm, Sunday August 18th

Yes, the Demons made the finals by less than 0.4% on the final day of the home and away season. But that’s irrelevant now. All that matters is the chance they have to cause serious damage in another finals series and the chance to once again play on the competition’s biggest stage.

Last time they did that, they were demoralised by a rampant Phillip Island in the 2018 decider in conditions those in attendance on the day could hardly believe.

These Demons don’t want to be remembered by that, and they’ve got the chance this weekend to throw absolutely everything at Inverloch at a familiar ground in Cora Lynn.

With it all to play for, and the loser bowing out, the pressure will be on from the get-go.

Like Cora Lynn and Tooradin-Dalmore, Inverloch Kongwak and Kooweerup have only played once this season too.

Back then it was Kooweerup winning in an absolute nail-biter.

The Demons will fancy their chances if they can produce their own brand of defensive pressure from the outset – it’s what they’ve prided themselves on for so long.

They know they have the talent to push the ball down the field in waves, both through the corridor and out wide, but it’s when they don’t have the ball that they can really make their mark early.

And neither does discipline. The Demons will need to keep a cool head in the face of the Sea Eagles, with all eyes on them.

But the Demons also have a number of exciting youngsters who’ll be advised to play their natural game, and showcase their potentially match-winning flair whenever possible.

Tom McQualter’s Inverloch side, meanwhile, is set to be boosted by a number of big-name midfield inclusions this week – in Brendan Iezzi and the antagonistic, yet just as hard-headed Corey Casey; along with, potentially, Josh Clottu.

But it will be up forward, through the likes of the in-form Sam Gibbins that the Sea Eagles could really make their mark.

If he’s able to take his big, clunking grabs either in, or close to the goal square, he could be in for another big goal-kicking haul.

But that’s dependant on the quality of forward 50 entries he’s on the end of, and how much of that trademark defensive pressure the Demons can put on the Sea Eagles’ midfielders. 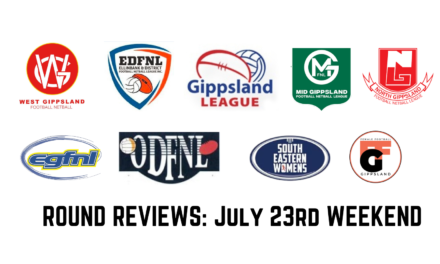