Flying east for the last game of the season, the Leongatha Parrots have shown Bairnsdale what finals form looks like, the visiting yellow and green machine ignited the scoreboard in the first term and went on to secure second position with a percentage-boosting win. The finals tune-up was led by Ben Willis, Tom Marriot out of the middle and to goal kicker Chris Dunne.

With Josh Hopkins and Chris Olden also contributing, Leongatha made their way to a ninegoal term. Accompanied by seven behinds their intensity was second to none. Setting focus on winning contested ball, coach Paul Cabris was happy with the outcome. “Last time they beat us in contested ball, and we pride ourselves on that,” coach Carbis said. “We dominated them in that area from the start and let the scoreboard take care of itself.” “We stressed that it’s important to play all parts of the game and that includes defence, so I was really pleased with the effort,” Carbis said. By quarter time, Leongatha led 61-8, the game already out of reach for the Redlegs. The Parrots took a 96-25 lead into the main break and then held the locals to just a single behind in the third quarter. Dominating in the contest and capitalising on the scoreboard Christ Dunne, Nick Nagel, Cam Olden and Cade Maskell ran out a strong third term. This gave Leongatha a 100-point lead at the final break.

The home team persisted in the second half, with the effort of Brayden McCarrey who kicked five goals.

Bairnsdale won the fourth term, with the wind at their backs. The Parrots emerged 90-point winners, now in a great position heading into their qualifying final against Sale at Morwell on Saturday, August 31. “I didn’t care how much we won by, the important thing was getting the points and second spot,” Carbis said. “We’ve got to be all hands-on-deck now and make sure we tick all the boxes so we can play at our best in a big game.”

Wonthaggi ended their season on a high on Saturday, using a huge quarter to defeat Drouin 96-62 away from home. The away side scored 38 points to 10 in the final term, sealing a big win and putting themselves in sixth position to end the year, winning four in a row.

With coach Lee Rowe’s unique coaching style just beginning to flourish, the side made a focussed start on the windy Drouin turf.

Kicking three goals and four points, the Power were one goal clear at the first break.

The high-paced start of the game suited the visitors with middleman Tom Davey paving the way.

Davey’s work rate was relentless and, powering through the centre with run, he backed himself to three majors.

Forward counterpart, Drouin’s Tom Barr, was impressive, but inaccuracy in front of goals gave him one goal and three points.

Power had strength around the ground, with physical backman William Leneham putting in a firm touch.

Travis Krouse made the last match of the season one of his best.

Kane McCarthy, Ben Eddy and many of the Wonthaggi’s side would have entered finals with great form.

As the Power sung their song it was obvious that the side is building something with great vision and gaining momentum.

Though the style of coach Lee Rowe has taken time to settle, the Power will now set their sights on a positive start to 2020.

It was slow going for both teams in the first quarter, the home side with the only scores of the term - one goal and one behind to lead by seven points at the first break.

The Gulls appeared to be in trouble when the Lions scored the first two majors of the second term through Ash Dugan and Lachlan Macleod, but answered with back-to-back goals in the space of two minutes to be back in within striking distance.

Dugan goaled again late in the second and was followed by Dylan Farrell to give Moe a 22 point lead before a Kim Drew goal near the siren helped Warragul limit the deficit to 14 points at half-time.

The second half got underway in much the same as the first, a scoring stalemate lasting 14 minutes at the restart until Matthew Ross found the big sticks for the visitors.

Brad Hefford and Tom Kelly followed suit in the closing stages of the quarter as Moe, without scoring, relinquished their lead to level scores at 39 points-apiece at the last change.

Kelly goaled again to start the fourth quarter to put Warragul five points up but an inaccurate Lions side - with seven behinds in the last quarter - ran home to victory thanks to late goals from Mitch Stanlake and Macleod for his second.

SALE defeated Morwell by the slightest margin in the final round of Gippsland League home-and-away action.

A mild breezy day greeted both sides at Sale Oval on Saturday, with the Magpies needing to win to ensure the double chance during the finals.

The Tigers proved hard to shake earlier in the year at Morwell, and with a slick and quick line-up this round, the Magpies' challenge was again to restrain and control the game.

Sale did this early through good pressure, but it was the scoreboard that was the true reflector. The Magpies were unable to make the most of the early opportunities, kicking six behinds but only one goal in what has become a slight concern for the Sale team.

Morwell kicked a solitary point, but the margin of 11 points at quarter-time wasn't enough to shake the enthusiastic Tigers.

The Magpies pressure dropped off and suddenly Morwell's key players, Anthony Rosato, Kuiy Jiath and Tyler Hillier became influential as the Tigers, on the back of their workrate and attack, found easier entries, making Sale pay.

A five goal to zero second quarter saw the Tigers with a 21-point buffer at half-time.

After some strong assertions at half-time, the Magpies would come out with a focus on implementing their brand of football, high pressure and an emphasis on taking the game on by foot. This saw the Magpies create plenty of opportunities but with a breeze which was heavily favouring the hospital end of the ground, Sale knew it would need a lead to defend in the fourth term.

Sale kicked four goals for the quarter to open up a nine-point lead, but a Morwell team with nothing to lose was always going to be hard to contain.

Sale controlled play early in the fourth quarter, but the Tigers claimed the lead halfway through the term.

A scrappy, tight game was eventuating, with the Tigers looking more likely to win.

Sale hit the front courtesy of a steadying goal from Jordan Dessent. When Morwell gained the subsequent centre clearance, it appeared the kick would be safely marked by Sale, but an uncharacteristic error by Chris Laverty saw the ball spill out and the Tigers regain the lead.

Sale won the next clearance, getting the ball deep.

The ball came off the pack with Rhys Carter kicking the goal to get Sale back in front.

The game was not done, with Morwell creating opportunities but two set shots from free kicks saw Morwell waste the opportunity before the siren blew just as Rosato kicked the ball inside the Tigers' 50. An extraordinary finish to a last quarter that had everything.

The win was much-needed for the Magpies, who have been down on form but also personnel. The long run into the finals, meant players have had to manage themselves while also trying to compete in an even competition.

Jack McLaren was the clear best-on-ground for Sale, his efforts in the final quarter particularly great.

John Gooch was fantastic in the ruck in the absence of Jack Lipman, while midfielders Jordan Dessent, Will Leslie and Kane Martin were at a consistent level.

Declan Barnett, Jarrod Freeman and Oliver Collins all looked dangerous up forward while working hard together, with Luke Williams again good in defence.

MAFFRA overcame errant kicking for goal, and a determined Traralgon side, to secure the Gippsland League football minor premiership.

The visitors should have had the match under control, but missed shots for goal prevented them from getting away on the scoreboard, providing an opening for the Maroons to get back into the contest.

Ed and Alex Carr, and Winston Gieschen used the ball well through the midfield.

In ideal conditions for football, the Eagles had the ascendancy at stoppages and weren't giving the Maroons much room when they had the ball.

An intercept mark from Daniel O'Brien set-up the opening goal for Johnstone five minutes in.

Preventing the Maroons from clearing the ball from defence, the Eagles missed opportunities for goal.

The Eagles led by 16 points after Johnstone kicked his second goal in the eighth minute following a strong pack mark.

Three minutes later, Daniel Bedggood benefitted from a kind bounce and ran into an open goal to give the Eagles a 22-point lead.

When Johnstone kicked his third goal, it appeared the Eagles had taken the match away from the home side.

But a 50 metre penalty set-up Traralgon's first goal for Jacob van Iwaarden. Haydn Hector then used the cross breeze to perfection to kick the Maroons' second goal, and reduce the deficit to 21 points by the break.

The Eagles kicked 4.8 for the quarter, and should have led by more.

A goal from Bedggood was answered by Traralgon's Max Luckie before Johnstone booted a major to put the Eagles 26 points ahead.

Goals from Sam Le Lievre and Josh Twite reduced the margin to 15 points, before Alex Carr's major appeared to settle the Eagles. However, a goal from Mark Collision following another 50m penalty saw the Maroons trail by 14 points at the main break.

Maffra had the better of play to begin the third term, with Traralgon not setting the ball into its forward line for 16 minutes. During that time, Johnstone and Ben Brunt kicked goals to put the Eagles 28 points ahead.

However, the Maroons, with nothing to lose after missing the finals, finished the term with two goals to trail by 17 points ahead of the final change.

Maffra appeared to have snuffed out any hope of a Traralgon comeback after goals from Tom Jolly and Johnstone, but the Maroons wouldn't go away.

Hector and Troy Forrest kicked goals for the hosts, who missed other chances to get closer.

The final siren went with Maffra 11 points in front, with a Dylan Loprese major afterward reducing the margin to seven points. 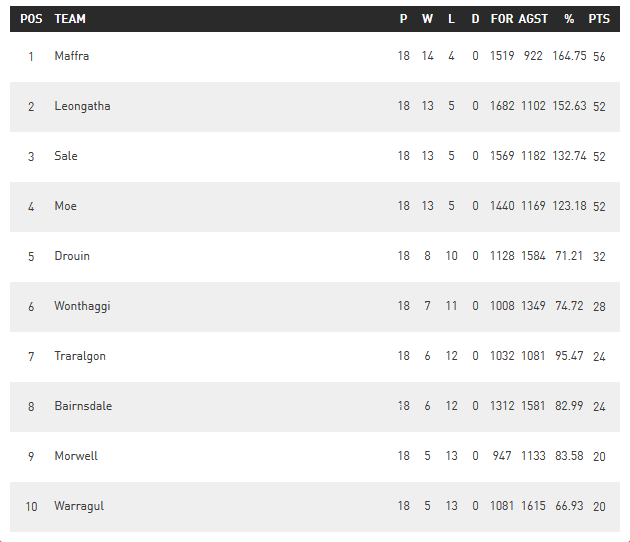