Gippsland Power take on the Sandringham Dragons in a Preliminary Final at ETU Stadium Port Melbourne on Saturday September 10th at 1:30pm. This game will be streamed live on the NAB League app.

Gippsland and Sandringham have received major boosts for their sudden-death NAB League semi-final at ETU Stadium on Saturday, with star players Mitch Moschetti and Ben Hempel making their long-awaited returns for their respective teams.

Mid-forward Moschetti is one of the Power’s spiritual leaders and organisers but has been making a splash in the Smithy’s VFL with Carlton, where he turned a 23rd man opportunity in Round 17 into seven impressive games at the State league level, where he averaged 12.6 disposals and kicked five goals.

The Power hasn’t looked the same team in his absence so would have been quietly smiling when the Blues’ VFL campaign ended at the hands of the Brisbane Lions last week shortly after they escaped their quarter-final against the Northern Knights.

He has averaged 24.6 possessions and 6.6 tackles in six games for the Power while also kicking five goals.

The Power made three changes from the team that edged out the Knights, with Jasper Craven and Rhys Galvin also returning in place of unlucky trio Cooper Brown, Harry Scott and Lachlan Smith.

The game being played at a small ETU Stadium in Port Melbourne is also beneficial for coach McLennan’s men.

“If we play our brand, which is more physical and two way than theirs, we hope we will be good enough but we’ll just wait and see.

“We play our best footy when we transition from defence very quickly – if we do that hopefully their options aren’t as prolific and they find it hard and they have to hesitate to find better options.

“Then they have to look at how they get around us which is where we want the game played.” 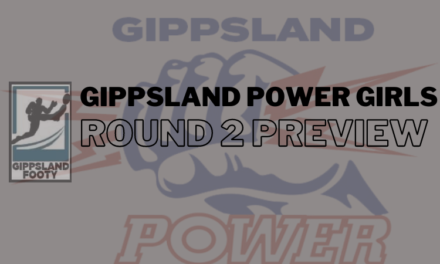