Calder Cannons have produced back-to-back wins in the NAB League Girls after running away with the contest against a spirited Gippsland Power outfit at Churchill on Saturday afternoon. After Gippsland had the run of play early, the Cannons made the most of their opportunities to run out 7.8 (50) to 2.6 (18) victors. It was both the Cannons’ biggest score of the season, and the Power’s tightest game of the year, meaning both sides could take positives out of the contest.

For the Power, Ash Centra had another outstanding performance that could have been even better by capitalising her couple of set shots in the opening term, finishing with 21 touches, four marks, seven inside 50s and two behinds. Sunday Brisbane (26 disposals) found more of the ball than anyone else, whilst Indiana Makai and Yasmin Duursma worked hard around the ground. In defence, Ella Stoddart and Leesa Guastella did well roaming high out of defence and further afield.

Just gives a four quarter effort each and every week, and after a quiet week last round, Brisbane was back to her ball-winning best. She amassed five more touches than anyone else on the field and accumulated them around the ground. Though she had a rushed shot at one stage that did not go to plan, she kept having a crack from start until finish.

Though not always having the time and space on the inside, Duursma worked hard to find space on the outside and dropping back into defence. She had a couple of nice touches early on, and then shrugged off a would-be tackler at half-forward charging towards goal. She continued to direct traffic throughout the match when dropping back into defence, and set up a lovely kick to Macie Gilmour at centre half-forward in the final term in a rare forward foray for the Power in that quarter.

Another outstanding performance despite being on the losing side and was able to catch the eye throughout the game. Rotating between forward and midfield, she often had an opponent close checking her, but she still managed to get involved and push on when required. Clever at knowing when to utilise her energy and quick burst, Centra was able to push off her opponent when she wanted to charge and win the ball, something she did consistently. Early on she looked incredibly damaging inside 50, taking a lovely mark and producing a pinpoint pass. She had a couple of set shots – including one after a contested mark – but missed both. Though it might have proved costly on the scoreboard, Centra could not have done much more around the ground, working well around the stoppages, cracking in and using her raking boot to get the ball forward time and time again.

Another reliable game from the Under 16s talent who found plenty of the ball inside Gippsland’s back 50. Tasked with the kickouts for the most part – though she shared that role with Alexei Guy-Toogood – Stoddart looked to play on at every chance she got and clear it from the defensive 50. Though not able to impact aerially, she was generally safe with ball-in-hand, able to move the ball in transition and just clear the danger zone. The second kick out of defence was generally an issue for the Power, so running and gunning it like Stoddart can at times, helped get it to a more favourable position for her side.

Gippsland’s most consistent inside mid on the day, Makai had some great defensive and offensive moments. Not afraid to lay some big tackles on the inside, Makai was also able to use the ball cleanly by hand under pressure, and even burst out of the stoppages on occasion. Though she might not have won a truckload of the ball, she did not waste it too often, and it was her defensive effort – tackle after tackle – that really stood out on the day. 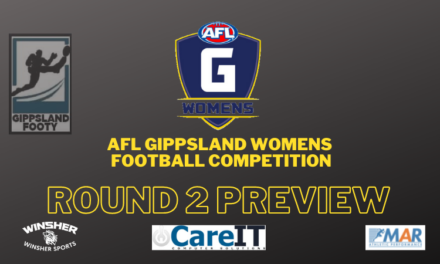