A year ago Jordy Sandy was gearing up to play finals with Traralgon, but now his focus has shifted towards a football career of a different kind.

After a “pretty surreal” fortnight, the super boot is still coming to terms with the fact he has earned a prestigious scholarship to play American football with Texas Tech University.

“I just can’t wait to be honest. It’s just excitement at the moment but once it gets a bit closer I’ll be pretty nervous I reckon,” Sandy said.

The 25-year-old made the decision to swap the Sherrin for pig skin about eight months ago and attended a Prokick Australia training session in Melbourne, but at first wasn’t convinced it was the right move. 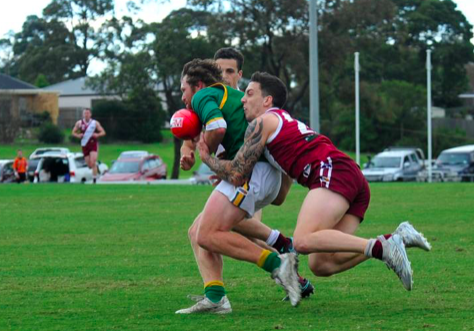 Jordy Sandy lays a tackle on a Leongatha opponent in 2017. Photo by Hayley Mills (Click image for original source)

“I didn’t think it would go anywhere to be honest,” he said.

However, it was the sage advice of good mate and fellow college football recruit Tom Hutton that kept Sandy on track.

“Me and Tommy work together at the Australian Paper Mill, and when they showed a fair bit of interest in him he said to me ‘come down and give it a try’,” he said.

“I honestly didn’t think much of it, but once I got down there it was really good and I just loved it.”

But unlike Hutton, it took Sandy a bit longer to pique the interest of recruiters.

“Tommy got a scholarship within three or four weeks, but it’s sort of taken me eights months,” he said.

“I was sort of a bit nervous about ‘are they going to take me?’ and he just said ‘don’t worry mate, just let it happen’.

“We usually car pool together to training at least once a week, and we were even on the same shift at work there for a while, so he’s been really good through the whole thing.”

(there is more content in the original article. To view original article online visit http://www.latrobevalleyexpress.com.au/story/5624902/traralgons-jordy-punts-on-texas/?cs=1588)

Featured image taken by Hayley Mills for Latrobe Valley Express. Original source of image can be viewed by clicking link above.