Longwarry will renew hostilities with Nyora next week with a place in the grand final up for grabs after the Crows ran away from the Warragul Industrials to win 17-8 (110) to 10-10 (70). The Crows kicked five goals to two in the second term to create a buffer and while the Industrials were able to remain in touch at the final change, the Crows added five goals to two in the final term as the Industrials ran out of legs.
It was a real arm wrestle early, as the Crows battled to a three-point lead at the first change. Riley Rundell roved front and centre to score the Crows’ first, and his first of four for the aftemoon. The Industrials won the resultant centre clearance to find Shane Brewster for the immediate reply. Mitch Davies converted a long shot to put the Industrials in front. Nathan Fry goaled from a free kick to level the scores. An inspirational goal in the run from the boundary by Longwarry’s Harley Jones lifted the Crows, and from there they would never relinquish the lead. Jones was in on the action again soon after, winning a free kick for a run-down tackle and finding Rundell on the lead for the Crows’ fourth. The Industrials rolled through a goal on the siren to pull the margin back to three points, but it would be as close as they would get as the Crows went on a second quarter roll to establish a handy butler at the long break.
A goal from a boundary throw in was followed by Daniel Fry converting from the corridor, and when Longwarry goaled from a free kick for deliberate out of bounds it made it three on the run to gap their opposition. A 50-metre penalty helped Luke O’Brien steady for the Industrials, but a running goal from Kane Oldham provided the immediate response. A long goal extended the lead for Longwarry and just as things were looking as if they might get ugly, Jack Blakey took a strong mark in the goal square for a much-needed goal. Longwarry’s ability to lock down on Tyson Bale after a strong start by the Industrials midfielder was a key factor in the Crows establishing their 21-point buffer.
The Industrials scored the first goal of the third term to inspire a competitive effort that gave them some hope heading into the final term. The Industrials kicked the first goal of the second half, but a long running goal from Jake Delphine was followed by a well-waited kick to Daniel Fry as the Crows threatened to run away with it. The Industrials stuck to their task, adding the next two goals to go into the final change still in touch.
Heading into the final change believing they were in with a sniff, a checkside goal to reduce the margin provided some early inspiration. Braydon McHugh took a shot from centre half forward and while he shanked his kick, it made it to the safe arms of Rundell straight in front to break the Industrials’ spirit. The Crows would add the next three goals to put the result beyond doubt. Tye Holland scored a consolation goal but Fry was able to cap off a strong performance from his team, scoring the last goal of the match from a well-timed lead for his fifth.
Riley Rundell, Jakob Serong, Brody Rundell, Troy Lehman, Delphine and Nicholas Redley helped the Crows to a strong victory.
Bale, Brewster, Davies, Holland. Blakey and Travis Ogden helped the Industrials compete in patches.
Warragul & Drouin Gazette

Poowong travelled to Catani on Sunday to play Catani in the elimination final.
Poowong lost Ben Hancock with a hamstring twinge and then lost Jake Cochrane in the first couple of minutes with an ankle injury down to two on the bench. The Magpies were determined to get off to a good start with all players working hard to go forward. Chivaroli had the job of running with Paul Pattinson and Tim Hancock was on Catani forward Owen Fitzpatrick.
An injury to Jaemeel Knecht in the opening minutes didn’t deter the Magpies, who went long early to find Trevor Hooker in prime position to mark and convert the first goal of the match. The second came from a high tackle on Thomas Wyatt, who kicked truly. Catani replied with a goal from a free kick. John Alexander made a long shot that carried over the line to keep the Blues in touch. Magpies midfielder Jack Hazendonk began to push forward with devastating effect, snapping consecutive goals in a matter of minutes to allow the visitor to a 21-point lead at the first change.
Catani came out hard in the second quarter. Catani opened with two points before Poowong goaled with Thomas Wyatt get ting in behind Catani’s defence. Paul Pattinson and Nicholas Visser worked hard for Catani but managed only three points. Poowong took advantage but Jake Hazendonk’s shot across the goal went out of bounds. From a throw in, James Doria picked up the ball and kicked a good running goal. Chris Robinson found Jake Hazendonk, who goaled Poowong’s seventh. Jackson Caddy’s long kick from a pack scored true to bring the margin back to 21 points at the long break and give the Blues some hope.
Poowong’s Chris Robinson was working hard around the ground and the defence limited Catani’s opportunities. Jake Hazendonk, Thomas Wyatt and Chris Doria ran hard, creating opportunities for Poowong’s forwards. The Blues’ inability to convert on their home ground – the second term particularly where a return of 1-6 – saw an opportunity to work back into the contest wasted, was the other telling factor in the result. Blues captain Nathaniel Rodda did his best to marshal his troops as they returned to the field for the second half.
After the half time break, Catani came out hard but the ball spent a lot of time on their forward hank with numerous ball ups from some heavy tackling from both sides. Wade Haysom collected a mark running back towards goal to convert before a long checkside from Caddy found Owen Fitzpatrick in front position to reduce the margin to eight points.. Poowong replied with a point before a strong mark down forward led to Catani’s fifth goal reducing the margin to eight points. Poowong worked the ball forward and from a free kick Chris Doria played on and goaled. Trevor Hooker goaled after Poowong played on from another free kick. Points to Hazendonk and Robinson before a hand ball off the ground by Wyatt to Matt Cozzio resulted in a goal. Catani tried hard to get back into the game but could only manage a point and then a great mark on the line by Poowong avoided a late goal by Catani. The lead at three quarter time was 27 points.
Poowong had one quarter left to complete the dream of advancing deeper into the finals. Coach Mick Hawkens made no changes as the whole team was playing well and contributing around the ground and with Catani requiring at least five goals to get back into the game. Poowong showed it was not going to let Catani back into the game and with Jake Hazendonk and Thomas Wyatt dominating around the packs it attacked hard.
James Doria’s shot for goal fell short, Wyatt then kicked a point before he picked up the ball on the run and kicked Poowong’s 11th. Catani took the ball forward and from a free kick for a high tackle to Paul Pattinson who passed it off Catani goaled followed by a further point. A pass from Wyatt to Jake Hazendonk resulted in a goal. A snap from Wyatt to the square resulted in a free kick to Trevor Hooker and Poowong’s 13th goal. Two late points to Poowong saw it run out winners by 41 points. The final score was 13.12.90 to Catani 6.13.49.
Poowong thoroughly deserved its win and worked very hard as a team. Chris Robinson worked hard all day around the ground and created many opportunities. The defence led by Jayden Sullivan, Alex Doria, Tim Hancock. Michael Harris and Joseph Bisognin did a lot of heavy work in the packs and with Josh Chivaroli limiting Paul Pattinson’s influence all helped to the victory. Jake Hazendonk, Thomas Wyatt and Chris Doria kicked eight goals between them.
The Great Southern Star and Warragul & Drouin Gazette 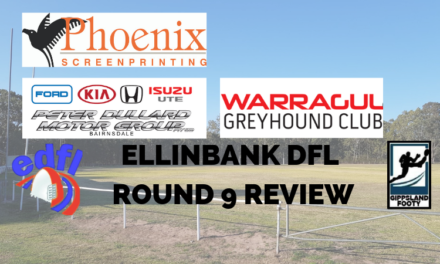 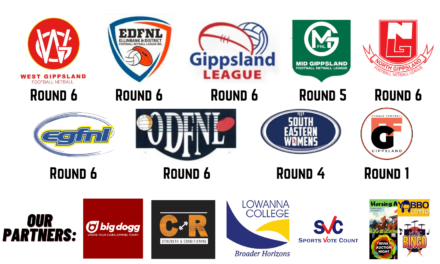