What time is the seniors game scheduled to start?: 2:20pm, Saturday September 14th

Separated only by percentage during the home and away season, Leongatha and Moe will go toe-to-toe this Saturday in the Gippsland League preliminary final.

With both sides close to full strength, Moe coming off a big win against Sale and the Parrots having just lost to Maffra, it’s set to be an intriguing contest.

Leongatha coach Paul Carbis is looking forward to the challenge.

“We’re looking forward to it and hopefully we can get some confidence back,” he said. “We match up really well with them, so we won’t change anything, we’ll just keep going about our method.”

‘Gatha won the last meeting between these two teams just four weeks ago, dominating from the outset and winning by 114 points.

Moe will be more confident this time though, having just recorded an impressive 70-39 win over Sale in their first semi-final on Sunday. Leongatha are coming off a loss to Maffra, and while they were in the game until midway through the fourth term, they did not manage to play their brand of footy.

The side may also go into this game without CJ Maskell for the second week in a row, with the forward being sorely missed against the Eagles. Players like Marriott, Schelling, Willis, Bowman, Verboon and Hopkins will be key for Leongatha, while Morrow, Wood, Stanlake and Long will be ones to watch for Moe. “As long as we do what we’re capable of, we should be ok,” coach Carbis said. “We’ll go about our work again this week; we’re excited to get back on track.” Both sides will undoubtedly be putting their best foot forward on Saturday, with top side Maffra awaiting the winner in this year’s grand final. 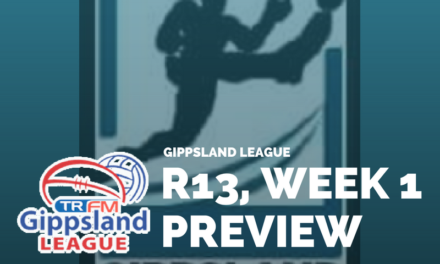