The girls will be keen to make a good start to the season, with last season only producing the one win from their eight games played. GWV also had a lean season last year, with just four wins from ten games played in a Covid-19 affected season.

The following below are excerpts from a Gippsland Power Girls preview published by Rookie Me Central, with the full article available to be viewed here.

IT might be a shorter turnaround than usual, but Gippsland Power Girls Gameday Operations Coordinator Chelsea Caple is excited about the possibilities. The Power were spread out across their satellite programs prior to Christmas as a way of minimising travel ahead of what is always a hefty schedule for the south east Victorian NAB League Girls club.

“The girls have been training twice a week on Mondays and Fridays in satellites based on their location,” Caple said. “We’re trying to reduce travel in preseason because obviously in season it gets pretty hectic. “It’s been really good, we’ve had a couple of sessions rained out and obviously some COVID hiccups, but aside from that it’s been really good.”

The start is much earlier than in previous seasons, but Caple believed the club had prepared well both on and off the field for the change.

“I actually think from an organisation perspective we’re handling it quite well,” Caple said. “We’ve obviously been doing the sessions twice a week and we’ll go back quite early after Christmas in preparation for the games. “But it will be really good for the girls separated from the boy’s season and to be playing in-line with the excitement of AFLW. “I think it’s a really positive step forward from the NAB League and hopefully works quite well.”

Caple described the list as a mix of players with a “diverse range of experience”. Having struggled for numbers at times last season – particularly later in the season – the Power are quite buoyant about the numbers heading into 2022.

“We’ve got six 2003 girls, coming back from that team. “We really hope that they’ll bring their experience and leadership and be able to influence the young ones coming into the team.”

“Definitely excited just with the depth of our list,” Caple said. “Obviously last year with COVID and just girls dropping off throughout the season, we did struggle. “It’s really exciting and promising to have girls new to the program, but also some girls returning that have gone away, worked on their skills, developed and then came back working really well with the team. “We’ve got more depth which is exciting, we’re still young, but I think it will be a really good experience here for them.”

From a list perspective, Lily-Rose Williamson and Yasmin Duursma earned a place in the Vic Country hub. Caple said the squad had been training well over the preseason, with the latter in particular stepping up over the off-season.

“Yasmin Duursma’s been training really well at the satellite Wonthaggi,” she said. “She was really new to the sport a couple of years ago, and we’re just seeing her athleticism matched with her game, and understanding for what she can apply her athleticism and other sports into football. “She’s doing a really good job with that.”

Caple is also excited about some of the youth coming through the program across multiple satellites, but was looking forward to bringing them all together and getting stuck into games.

“We’ve got some younger ones that have been coming up,” Caple said. “In our Garfield satellite we’re really excited to have some girls that are very new to the squad. “They’ve been training well there, as well as some quite young ones in Churchill.”

From a national prespective, eyes seem to be on Yasmin Duursma.

The following are excerpts from the NAB League article “26 Players to Watch in NAB League Girls 2022”. You can read the full article here.

COACH’S COMMENT (RHETT McLENNAN): Has an incredible work ethic married with great athletic talent. Yas has turned her hand to football in the past two years with aplomb. She works hard on her deficiencies to match her natural talent of being able to run and carry. The sister of Port Adelaide’s Xavier Duursma, she has clean hands and excellent vision in close.

COACH’S COMMENT (RHETT McLENNAN): The cleanest player below the knees at our club, boy or girl. Indiana has great skills and vision with very good hands for a player her size. She is very unassuming on the field but is one for the purist football fans to watch as she rarely makes a mistake. Got a taste in eight games for the Power last year. For fans headed to the game, the Under 16 girls side play on the same day at the same venue, with the game beginning at 11am. 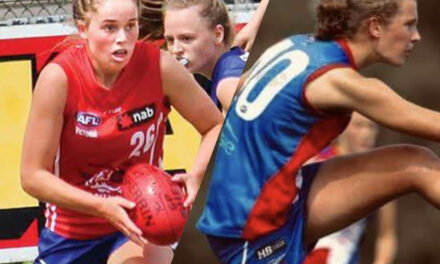