ROUND 12 MATCH REVIEWS – by Laurie Williams

Round 12 produced some big scores  in a great day for football in cool but  dry conditions at most venues. Hill End lost their first match of the season going down to Fish Creek. Newborough had a massive fightback to down Thorpdale while Yinnar gave traditional rivals Boolarra a decent touch up. Toora got home against Tarwin and Mirboo North kept Stony Creek goal less. Morwell East went down again to another ex Alberton team.

Thorpdale and Newborough was a match of dual contrasts  with Thorpdale winning the first half and Newborough barnstorming their way back in the second half.    The match dominated by the Newborough youngster Joel Mitchell who seemed to attract the ball whether he was near it, he pulled down some spectacular marks and his long kicking was a highlight of the match.  Thorpdale jumped Newborough early with James Durkin scoring the Blues first  after a top leap right near the behind post.  Energetic forward Matt Powell got in the action for Thorpdale pulling in five marks for the term  and scoring three goals as the Blues outran Newborough to double their score at quarter’s end 4-4 to 2-2. Newborough lifted in the second term with Joel Mitchell with a great grab able to slot one through from outside fifty metres, his second goal after two minors  levelled the scores at seven minutes into the term. Thorpdale replied with two unanswered goals to get back the lead as the match went into a tight battle between two evenly matched teams. Joel Bowden and Peter Somerville were doing well for Newborough.   There was on field confusion between the near matching colours as players mistakenly picked out opposition players to kick to. The match was of high intensity as Thorpdale, playing at their best went into the rooms at half time leading by 15 points. After half time the match took another turn as Newborough started to dominate, they got the centre clearances which gave their forwards plenty of time to get into position, the Dogs were kicking long down the corridor allowing Joel Mitchell Liam Flahvin to control the forward zone. The Dogs put on five goals in nine minutes to hit the front after trailing for 74 minutes of the match. Their joy was short lived as Thorpdale regained the lead only moments later. Newborough unleashed,  added six unanswered goals to overpower the gallant Thorpdale. It was a nine goal term for Newborough as they went from 15 points down to lead at three-quarter by 35 points. A further eight goals in the final term saw Newborough finish with 23 goals, 17 coming in the second half. Joel Mitchell having an excellent match finishing with 8 goals with 10 team-mates sharing the rest. For Thorpdale Matt Powell topped with three. Newborough’s best were Liam Flahvin, Joel Mitchell, Michael Rosato and coach Peter Somerville. Thorpdale were well served by  Jarrah Burgess, Richard Mathers, Joel Monger and Trent Gibson. It was Newborough’s highest score over Thorpdale since 2014

Boolarra’s reunion of their 2001 premiership went off well but their present day counterparts failed to deliver against their old rivals Yinnar.   It was Yinnar’s 11th  successive win over Boolarra with  Boolarra’s last win way back in 2014 in the 1st semi. It was a sour ending for Boolarra on the field going down by 109 points. After their huge win the previous week Boolarra had their sights set for a surprise win over Yinnar, rivals for well over 100 years. Yinnar, however had other ideas as they steamrolled the Demons into submission with a six goal first term, Daniel Johnson playing a starring role up front. Boolarra had no answer to the running magpies as Yinnar continually got the ball into their fifty. Brendan Chapman was giving good support as was Jack Deen and Matt Williams. The Magpies rolled on giving very little advantage to Boolarra as the Demons struggled to stop Yinnar. Five goals in the third boosted Yinnar’s percentage and their final seven goals in the last term gutted Boolarra as Yinnar ran out winners 22-10 to 4-9. Daniel Johnson the mainstay for Yinnar with six goals and Mark Quigley added four. Aidyn Sheers got a couple for Boolarra in what was a disappointing day for the Dees.

Hill End’s long trip over the hills didn’t give them the rewards they craved, unbeaten up to Saturday, the Hillmen had to kneel to Fish Creek although they had a lead at half time. Hill End may have lost their first match but they still sit on top although shakily by only 5.1% from Foster and 62.27% from Mirboo North. There was still quality players missing from Hill End especially after their hard earned win over Morwell East the previous week and it looked like they were in the box seat at half time although their scoreline could have look a lot better than 5-7 to 4-0. Fish Creek doubled their score in the third term but importantly kept Hill End down to a couple of minor scores. Ethan Park was good for Fish Creek assisted by Tom Cameron and number one Bailey Harfield-Park  all got Fish Creek motivated, but Hill End fought back to outscore Fish Creek in the last term but the Roos had enough in reserve to get the points by a goal, Hill End having their chances but blown by inaccuracy. Brady Mitchell finished with four goals for the Creek and Chase Saunders added two more to his tally of 28. Tyler Pratt, Luke Tumino, Jack Skinner and Jack Hudson almost got Hill End to victory but Fish Creek stood firm to carry the day 9-4 to 7-10

Mirboo North gave Stony Creek a football lesson, travelling to Stony Creek for the first time since 1968 when they faced each other in the former South Gippsland FL. Coach since 2018 Josh Taylor celebrated his 200th game with the Tigers. Mirboo North kept Stony Creek to their lowest score for at least a decade (0-2) not giving the Lions much chance to score. It has been a horror fortnight for Stony Creek who could only manage 1-3 the previous week. Stony Creek were the first to score a behind which they doubled in the last quarter. Mirboo North had trouble adjusting their radar and could only manage 2-8 to half time (according to the MGFNL website). It was tough going for both teams with Mirboo North eventually running out winners 8-11 to 0-2. Liam Nash playing an important role for the Tigers with three goals and BOG, Ben Campbell, Damien Turner and Mitch Wightman all giving their best for the Tigers. For Stony Creek, the scoreline doesn’t tell the real story as they plugged away without success, best being Sam Marriott, Tom Stone, Jai Bright and Hayden Funnell.

In the battle between ex-Alberton rivals it was Toora Magpies who overran their rivals Tarwin by 23 points. In the last decade Toora have only won seven times over Tarwin while the Sharks have won 10. There was very little between the two teams with Tarwin taking an early lead, an 18 point break at the first change suggested that Tarwin were stronger but the Magpies fought back in the second term to score four goals to capture a four point advantage going into half time. It was still a toss up by three quarter time with Toora in the lead by five points. The final quarter was decisive as Toora not only scored goals but importantly stopped Tarwin from scoring to run out winners 9-10 to 6-5. Luke Manders scored four for Toora with Harley Hoppner, Matt Ponton, Nathan Herrington and Luke Manders in  starring roles for the Magpies. For Tarwin, Tom Van der Kolk, Ben Ellen, Nick Browne and Jake Cochrane were voted as best.

Foster put Morwell East to the sword and now are equal points with Hill End for top mantle but are 5.1% shy of taking top spot. It was important for the Tigers to beat Morwell East who seem to have a fear of the ex-Alberton teams. Foster controlled the game early but were wasteful in their kicking, 13 shots in the first term showed that Foster had control of the football but it wasn’t reflected on the scoreboard as they raised 5-8 for the quarter. Morwell East got a couple but weren’t firing as they potentially can. Foster led well for three quarters to build up a buffer for an intended surge by Morwell East in the last. Urged on by Coach Devon Soutar, the Hawks played their best scoring 5-1 to two goals but fell short by 30 points as Foster won 11-14 to 8-2 earning second place on the ladder. For Foster, Ben Humphrey scored five goals with  Todd Bastion, Brendan Neville, Will Matteringley and Troy Van Dyke as best. For the East, Shaun Barnes battled bravely with support from Joel Soutar, Frank Marks and Nick Grainger. 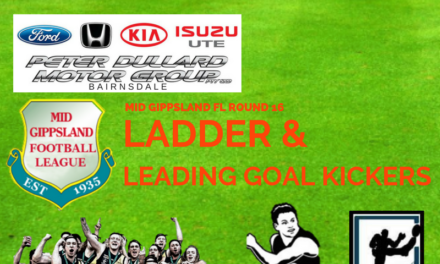