Gippsland Power has locked up a top four spot in this year’s TAC Cup competition with two rounds remaining after defeating Oakleigh Chargers by five points in a thrilling contest at Warrawee Park. The Power jumped the Chargers in blustery conditions early on, booting 3.3 to 1.1 to lead by 14 points in weather that looked like goals would be at a premium. Over the next two quarters, Oakleigh reversed the momentum and seemed to have all the control, with nine scoring shots to one, resulting in five goals on the board for the home team. In fact, Gippsland’s Luke Williams booted the final goal of the third term in the twentieth minute – the first Power score since the opening quarter. The Power came out firing in the final term, booting five goals to two, with the final of those – a Noah Gown set shot from 15m out – handing Gippsland the lead. With the ball down Oakleigh’s end in the dying seconds, Noah Answerth thumped the ball onto the boot and it bounced through from almost 60m out. The only problem? The siren had gone before he had disposed of it, giving Gippsland a vital four points.

Captain Xavier Duursma lead from the front with 29 disposals, seven marks, two clearances, eight inside 50s and four rebounds, while Matthew McGannon collected 21 touches and four marks in a solid contested effort from the overager. Forwards, Noah Gown and Sam Flanders were busy once again, booting two goals each and providing a threat in the air with a combined three contested marks, and 11 all up. Fraser Phillips was one that caught the eye up forward, dominant early and booted a fantastic goal in the opening term, he also had five marks and four inside 50s.

Despite only winning 13 disposals for the day, Flanders had a big influence on the game through the midfield and especially forward in the final term as Gippsland fought back. He was prominent in contested situations at the stoppages both offensively and defensively, using his explosive athletic traits to charge forward or quickly wrap up an opponent. While his field kicking was occasionally scrappy, the ones he did hit were superb as displayed when finding Gown on the lead before quarter time. Two final quarter goals again proved his match winning ability, including a brilliant set shot drop punt from a tight angle.

The Power skipper was good again, this time in playing a more outside role where he found dangerous space throughout the contest. His kicking and decision making was first rate, especially when entering the forward arc and getting the ball inboard. In the third term he won a difficult ball ground ball on the boundary line before quickly turning to the corridor and finding a teammate lace out like it was second nature. It appeared he was involved in every dangerous scoring chain, ending the day with 29 disposals and eight inside 50s.

‘Mozzie’ is one of those types that doesn’t need a whole heap of the ball to have a huge influence and Saturday’s game was the perfect example. Every time he won the pill, something exciting happened and was generally to the advantage of Gippsland. In the first term he stole a ball from seemingly nowhere out of an opponent’s hands, swung onto his left foot and landed the on the chest of Gown 50 metres away inside 50. Later in the game he produced a brilliant blind turn at a stoppage to create space and superbly find Pepper inside 50 for a vital goal assist. He could have finished off a spectacularly eye catching outing with a long three bounce run goal but just missed to the left. No goals and just 10 disposals, but huge impact.

The big bodied, bottom aged key position player was offered some relief with the return of Rylan Henkel last week, starting the game in his natural forward role. In saying that, he spent plenty of time in the ruck, won the most hit outs for his side and competed with aggression as we’ve become accustomed to. Did not win much of the ball, but produced one of the game’s best highlights with a towering pack mark on the wing.

After receiving a second consecutive draft combine invite, McGannon continued his extremely consistent ball winning form with another 21 touches. Starting generally on the wing, he ran up and down the ground and was used offensively by his teammates whenever the opportunity presented. Lost a ground ball in defensive 50 that turned into an Oakleigh goal in the third term, but made up for it with some determined defensive efforts without the ball, including an important tackle late in the game that earned a vital holding the ball.

The lightly-built bottom-ager is really starting to develop nicely and produced arguably his best game for Gippsland to date. Having produced a couple of impressive games for his local senior side Warragul in recent weeks, that experience against quality senior opposition looks to have yielded further improvement. He started the game on fire, firstly taking a strong mark on the lead before winning numerous possessions in the forward half and using his silky skills to advantage. He finished a brilliant first term with a classy running goal on his preferred left boot. While he had quiet periods for the rest of the game, he popped up again late with a beautifully weighted kick to Flanders deep inside 50.

In his second game back for Gippsland, Henkel is building his form again and was solid against Oakleigh. While he had a tough task aerially against the 102kg Lachlan Harry, he competed at every contest and was especially determined at ground level. His second efforts were noticeable, laying five tackles, winning three clearances and throwing himself at the ball. He took a leaping contested mark and is going to be a vital cog for the Power’s premiership push.

After kicking consecutive five goal bags, Gown was again prominent in the forward half and is clearly glowing with confidence. His leading patterns are improving with every outing and he has a presence that you can’t teach. He was strong on the lead overhead and can stick a contested mark even when out of position. He’s also developing a knack of being involved when the game is on the line, taking a huge contested pack mark that earned a 50 metre penalty. He missed the set shot that would have given Gippsland the lead, but didn’t miss his second chance. Taking a strong intercept mark on the forward flank, he was fortunate to get a second 50 metre penalty and kicked truly for the match winner. In a purple real patch!

Starting the game against the smaller Dylan Williams deep in defensive 50, Reid was solid as always defensively and got to many aerial contests. While he would have liked to have stuck a few more attempted intercepts, he still managed to have a defensive impact and ran to space on the flanks to create another option when Gippsland had possession.

The ultra-consistent Motton did not win as much of the ball as he usually does from the wing, but had a heavier contested workload and impact. He collected an equal game high four clearances and really fought hard in tight, but backed that defensively with a team high 10 tackles. While he could not create the space to utilise his elite releasing skills frequently, it was good to see him influence the contest in a slightly different manner. 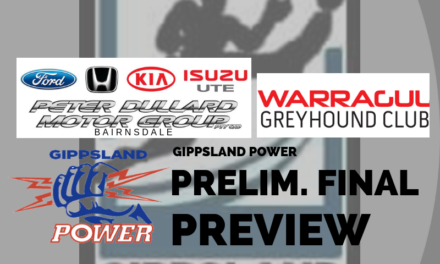