With the 2022 AFL National Draft coming up on Monday 28th November and Tuesday 29th November, we have a look at the Gippsland Power contenders who have been earmarked as possibilities to find an AFL club as their new home.

All blurbs via Rookie Me Central AFL Draft Guide. This can be viewed in full here. 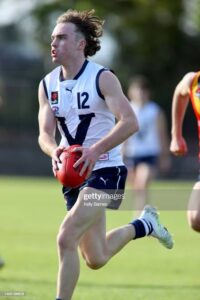 Somewhat flying under the radar due to the plethora of talent in all his sides, Coby Burgiel has been a consistent and reliable force through the midfield, but has shown his versatility when forced to play as a defender or forward for Vic Country at the Under 18 Championships. Burgiel’s speed and cleanliness below his knees are two traits that standout amongst other midfielders in the crop, finishing equal second in the 20m sprint at the National Combine with a stunning 2.88-second run, Burgiel has no trouble showing this speed on-field.His scoreboard impact was a consistent part of his game through the NAB league season, kicking 12.11 from nine games in the competition, with two hauls of three the best performances in that regard, despite playing majority of his time in the centre square set up. His work rate of the ball in offence allows him to get to opportune positions heading forward, often in a good spot to receive a handball from a teammate when running towards goal.There is a lot to like about Burgiel when considering draft prospects, and the building blocks to be a high level midfielder are there, however there is some work to do with his disposal under pressure. Whilst it was an area that saw improvement as the year went on, there are still times where Burgiel can rush his kicks or handballs when in the thick of congestion or with a tackling imminent.Coby Burgiel is a high-impact midfielder who has an ability to regularly hit the scoreboard both when playing on-ball or inside 50. Boasting incredibly clean hands and a dangerous enough athletic profile to worry opponents, Burgiel is one who could land anywhere in the draft from the second round on. Expect him to start as a forward, and eventually work his way into the midfield as his career progresses. One of the big bolters in this year’s draft class, Bailey Humphrey has made every post a winner in 2022. The Gippsland Power captain got a handful of NAB League games under his belt last year, but missed out on the initial Vic Country hub and took it in his stride to prove himself more than capable as a top-ager.A strongly built ball winner who doubles as a damaging forward, Humphrey’s season was interrupted by an untimelyknee injury which saw him miss much of the Under 18 National Championships, but he rocketed into top 10 contention upon his emphatic return.Humphrey’s 31 disposals and four goals from nine scoring shots against the Northern Knights in Round 14 made recruiters take note of the game-breaking ability he offers, and after leading the Power to both a minor premiership and preliminary final, the 18-year-old eventually got to don the ‘Big V’ in Vic Country’s final championship match.Much of the reason behind Humphrey’s considerable rise this year is down to the sheer array of desirable traits he offers. At his core, he’s a hardened ball winner who translates his contested acumen to forward 50 threats, but there are so many factors which contribute to him owning that classic goalkicking midfielder tag.There is simply so much to like about Humphrey, who looms as a genuine top 10 candidate. On top of his attractive set of skills, he is a top notch character whose leadership among the Gippsland group really lifted this year. Clubs will value his ability to impact both as a midfielder and forward, and he is the type of player who will be in high demand given his game- winning attributes. With grand strides made in such a short time, he still has plenty of improvement left too. Having kicked four goals for Vic Country in an Under 17s match in 2021, it is not surprising that Jacob Konstanty was one with eyes on him from the very start of the year. He took a little bit of time to get going in 2022, but a switch from the midfield back to his usual small forward role saw him flourish.Whilst Konstanty is not always a massive goal kicker each week, it could be argued he creates more goals than most with his forward half pressure. Konstanty manically chases down opposition defenders in an effort to create opportunities for himself or his teammates in the forward half, averaging 5.8 tackles from his 14 NAB League games, his effort in this regard is consistent.There’s a lot of impressive aspects to Konstanty’s game, but the area where he truly sets himself apart from other forward prospects is his tackling in the front half. For a player of his size, Konstanty’s ability to stick tackles on bigger opponentsis quite admirable, able to pull down key position sized players just as easily as he can run down those closer tohis own size. On the occasions that Konstanty cannot quite make it to apply a tackle, his efforts in pressuring opponents and forcing them towards the boundary are just as valuable, forcing mistakes by the opposition with his intensity.With selection at the draft looking more likely than not, Konstanty would still benefit from improving some aspects of his game. Whilst he has consistently hit the scoreboard through the year, Konstanty does have a tendency to fade in and out of games at times. Naturally hitting the scoreboard often is promising, but Konstanty does still have some work to do on his conversion in front of the sticks. Max Knobel is a Gippsland Power bigman who has come along in leaps and bounds in season 2022. Though far from the finished product, Knobel has some eye-catching moments that suggest he could be a top-flight player in the future. Though some rucks are readymade beasts and others are athletic freaks, Knobel is neither, but more something in between. He is mobile enough to get around the ground and provide an option, and strong enough to be a presence when forward.Like any tall, Knobel is not a player a club would draft to bring in for Round 1, 2022. The son of former Brisbane, St Kilda and Richmond’s Trent, the Power ruck is not eligible for any of the clubs as an attached selection, with his father’s 41 games in the red, white and black the most of any of his three stints.For Max, he just keeps growing. Having entered 2022 as a 204cm, 86kg, 17-year-old surpassing his dad’s playing height of 202cm, Knobel is now up to 206cm and 91kg, putting on some much needed size to go with his towering figure. It enabled him to averaged 16.6 hitouts throughout the 2022 NAB League season with the Power, and earn a spot as Vic Country’s first choice ruck.Knobel is a value late-rookie pick given his clear upside and ability to get around the ground despite his size. He has done enough to suggest he could be a long-term AFL ruck, and the fact he can provide a presence inside 50, makes him a perfect development player.Max Knobel is a long-term project player who has some attractive traits that could be applied at the top level. Though considered a later draft prospect, and certainly no guarantee for this year, Knobel will be one who is likely to be on club’s radars for years to come. If he can continue to work on his areas of improvement, expect him to continually put his hand up for clubs if not taken in the AFL Draft. 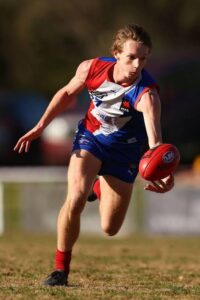 Cooper Vickery has enjoyed a consistent year at NAB League level for Gippsland Power, where he became a reliable ball user out of the defensive half and running down the ground. His transitional running rom the back 50 and then rotating onto a wing allowed him to find plenty of the ball, and his metres gained were always high.An outside-dominant player, Vickery is still only light at 72kg, and his traits suit that outside role. Often found coming out of half-back, Vickery is a player who will look for the one-two be it via hand or short kick, and that allowed him to set his side up.Though not the most damaging player with his disposal, he is neat and consistent, averaging the 17.3 disposals for the Power, and reaching double-figure disposals each week bar one. In Rounds 8-9, Vickery picked up back-to-back 25-disposal hauls and averaged eight rebound 50s in that time.
Earning his spot in the ‘Big V’ for Vic Country, Vickery averaged a similar 16.8 disposals, as well as 3.5 marks and 3.5 rebound 50s, with his kicking efficiency of 68.3 per cent quite high, but also only winning a third of his touches in a contested situation. Regardless, Vickery showed enough to earn a National Draft Combine invite, and has done all he could throughout season 2022 to put himself in a position to be drafted.
Cooper Vickery is a consistent ball-winner who plays his best footy on the outside, be it half-back or the wing, and he is able to distribute the ball while gaining plenty of meterage. Though the Gippsland Power defender/winger is more of a late to rookie chance, Vickery has shown he has the athletic capacity to further improve his game at the top level. Image via The Australian

A Vic Country Under 17s representative, Jonti Schuback is one of the many exciting Gippsland talents for the 2022 crop. Schuback has gradually moved into the midfield through the season from the backline, arguably looking at his best when positioned on a wing, where he can use his kicking when out in space to use the ball damagingly going forward.Schuback has been one of the consistent performers for his side this season, being a reliable accumulator or interceptor through each of his 13 appearances. Though his best traits could be more consistently applied in-game, when he is on, he can do a lot of damage. One only needs to look to his 36-disposal, 11-mark and eight-inside 50 game against Northern Knights, where he was at his outstanding best. If he could produce more performances like that, then his stocks would be rated a lot higher.Whilst Schuback improved on his contested game to some degree through the season, it remains an area that needs some further development, with his disposal in the thick of the contest also an area for improvement. He is a natural outside ball winner who runs and carries to create down the field, but he is one with a high upside if it can all click.

We wish all players well in the upcoming National and Rookie Drafts. 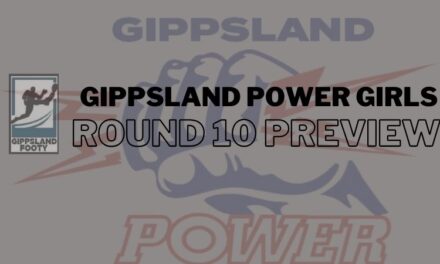