AFLW 2022 Season 7: Gippsland players to keep an eye on The 2022 AFL Womens Season 7 is well underway, but which players hail from Gippsland? 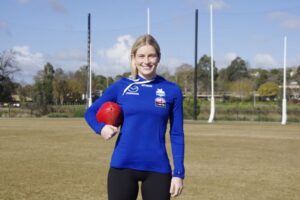 The former Gippsland Power player was recruited at Pick 51 in the 2o21 National Draft after two seasons playing with Collingwood’s VFLW team. Ferguson is a flexible, tall defender whose competitiveness and ability to read the ball in the air stands out.

In her debut season last season, Ferguson played 10 games for North Melbourne, where she averaged 7 disposals, 2.6 marks and 1.5 tackles per game. 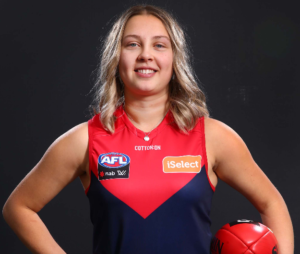 Currently the most accomplished AFLW player to come out of Gippsland Power, Tyla finished the 2021 season as the NAB AFLW Rising Star winner, made the AFLPA 22 under 22 team and won Melbourne’s Best & Fairest Award. Stats wise, she finished the season averaging 19 disposals, 5 tackles and 3 marks a game. Due to a broken collarbone that kept her out of the 2018 season, Guttridge didn’t make her AFLW debut until 2019, where she managed 3 games before deciding to sign with new expansion team St Kilda. She played every game in 2021, finishing the season averaging 8 disposals, 2 marks and 2 tackles a game. Sherriff had a breakout debut season in 2020 and has played every game since her debut. In 2021, Sherriff finished the season averaging 11 disposals and 4 tackles a game. 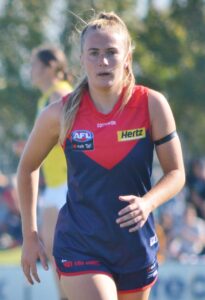 Selected at pick 35 in the 2020 draft, Fitzsimon is an explosive footballer who can play through the middle and up forward, and she knows how to kick a goal. In her debut season at Melbourne last year, she averaged 8 disposals and 2.5 tackles over two games played. 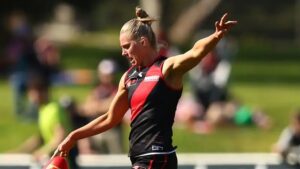 After a season with St Kilda’s VFLW affiliate side Southern Saints in 2019, the new Saints AFLW side selected life-long supporter Vogt at Pick 40 in the 2020 National Draft. Vogt played 8 games in 2021, averaging 5 disposals and 3 tackles a game. In the 2022 AFLW season 6, she played 9 games and averaged 8.3 disposals, 1 mark and 4 tackles a game.

At the end of the 2022 AFLW 6th season, Vogt advised St Kilda should would be leaving the club to join expansion side Essendon. 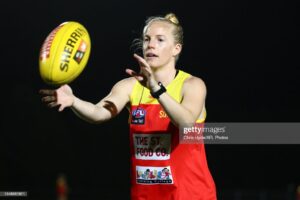 Hailing from Fish Creek, Danckert plied her trade with Bond Uni in the QAFLW in 2021, where she won the league Best & Fairest award. Danckert was training with the Suns when two players were put on the club’s inactive list, allowing herself and one other to be signed on to the official players list. A product of Gippsland Power, Bass Coast Breakers and Collingwood VFLW, Matser was selected by North Melbourne with Pick 51 in the 2022 AFLW Draft.

A genuine ruck with existing experience in senior women’s football, Matser offers a point of difference at the stoppage by going up for the bounce with her left hand which can be a dangerous weapon for her midfield group. With a good running tank and strong fundamental skills, Matser has the ability to cover a huge amount of ground during the game. Another product of the Gippsland Power, Williamson signed on with expansion team Essendon in the 2022 AFLW Season 6 as an injury replacement player.

She started playing football in Under-12 boys side, starting at the Orbost Snowy Rovers and the Churchill Cougars to winning 4 premierships with the Traralgon Maroons. Williamson was named as the Best on Ground during her V-Line Cup matches while also getting selected into the Team of the Year. She was also invited to train with the Hawthorn VFLW Academy. In 2021, Williamson was selected into the Vic Country Under-17s side. A highly touted prospect from the Gippsland Power program, Duursma is the niece of former VFL/AFL player Jamie and sister of current AFL player Xavier.
Drafted at Pick 45 in the 2022 AFLW Draft, Duursma is a defensive midfielder with strong attributes in running ability, versatility and good ball use. During the National U18 championships, she had a breakout performance for Victoria Country, culminating in the final match where she collected 22 disposals, five marks, four tackles and six rebound 50s, with 85 per cent kicking efficiency.

Did we forget someone? Contact us and let us know. AFLW 2022 Season: Gippsland players to keep an eye on AFLW: Gippsland players to keep an eye on