When Joe Carlson first came to Australia from the United States in 1974 on a teaching contract he witnessed a game of football and said to himself “I want to do that”.

Unlike most foreign to the game, he wasn’t daunted by its physicality or oddly-shaped oval ball and laced up for the Mirboo North reserves soon after his arrival.

Carlson was poached by friends to play for Hill End and took to life at the club like a duck to water and became secretary in 1978.

He returned home to the States soon after and would journey back to Australia on a “fairly regular” basis, but it wasn’t until this year -– 40 years since his tenure as Hill End secretary – that he was reunited with the club.

“I lost touch with people at the club for about 25 years but I just got on the Australian White Pages and looked them up two years ago,” he said.

Hill End past players’ secretary Peter Hopkins informed Carlson of the club’s 2018 reunion and it presented an opportunity too good to refuse.

Carlson flew in from Chehalis – a small town in Washington – for the Hill End reunion on Saturday July 7th.

It was a full house at club headquarters with 120 in the room.

AFL legend Kevin Sheedy was a special guest at the celebrations and provided a fond throwback to the football initiation days for Carlson.

“It was great to see Kevin Sheedy here because I watched him when I was here in the ’70s, so that was pretty fun,” he said.

Lovingly known as ‘Joe the Yank’, when Carlson wasn’t teaching at Yallourn High School in the ’70s he was out with his Hill End teammates learning the ropes.

“I really didn’t know what I was doing. I was just going wherever the ball was going,” he said.

“It was fun. It was a long time ago but I really enjoyed it.”

Now semi-retired, Carlson will head home later this week where he will return to life with “honeydews in the morning and golf in the afternoon” but admitted the lure of Hill End will always be there.

“It’s the camaraderie. It just doesn’t stop at the club, it sort of gets in your blood,” he said. 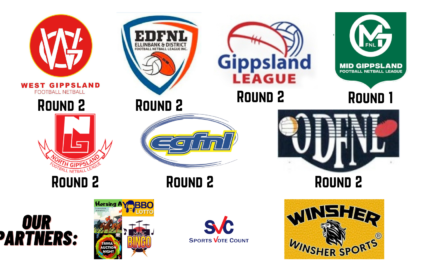