This week, NAB League Round 15 sees the Gippsland Power boys take on the Oakleigh Chargers.

The game takes place on Sunday 15th August at Morwell Football Ground. Match is scheduled to start at 1:30pm.

MATCH PREVIEW – written by Michael Alvaro, reporting for and published by Draft Central.

The 2021 NAB League season returns once more on Sunday afternoon, with eased lockdown restrictions seeing a quartet of the competition’s Country regions take centre stage. Two games remain for the four teams in action on Sunday, with the added potential for make-up fixtures and a Wildcard Round before finals.

Sunday’s second fixture sees first battle last in the Country pool, as the 7-2 Greater Western Victoria (GWV) Rebels travel to take on Gippsland Power (2-7) in Morwell. Despite their perfectly opposite records and current ladder positions, Gippsland picked up the more recent win after toppling Oakleigh Chargers last time out, while GWV went down to Sandringham Dragons. The Rebels easily accounted for their weekend opponents in Round 8 though, to the tune of 79 points on home turf.

The hosts welcome back top-age defender Jess McGrath after his two-game stint in the Richmond VFL set-up, slotting straight back in at centre half-back. Up the other end, Jai Serong has been named at full forward but will likely be thrown around in numerous roles, while bottom-agers Jacob Konstanty (forward) and Cooper Vickery (wing) are a couple to watch. In midfield, Mitchell Moschetti is in fine form and will look to add some polish alongside Luis D’Angelo as the Power move forward.

GWV has again named a stacked side, with all nine of its Vic Country representatives available. A midfield squeeze is on the cards with top 10 talent Ben Hobbs named in there alongside Sam Butler and Sam Breuer, seeing the likes of Fraser Marris and Marcus Herbert squeezed out to flanks. Skipper Josh Rentsch may be set for more time in the ruck, and defender Josh Gibcus promises to catch the eye as always. On the interchange, tough midfielder Nick Hodgson is a handy inclusion for the Rebels. 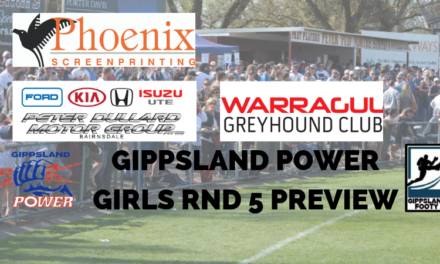