The dreams of three Gippsland Power players came true last night (9/12/2020) when their names were called out during the 2020 AFL National Draft.

Zach Reid of Leongatha/Inverloch-Kongwak, Ryan Angwin of Foster and Sam Berry of Maffra all experienced the euphoria of hearing an AFL club read out their names on the biggest night for potential draftees.

At pick 10 Essendon selected Reid, who joins other ‘Gatha graduate Dyson Heppell at the Bombers, as well as other former Gippsland Power alumni Anthony McDonald-Tipungwuti and Irving Mosquito.

After acquiring the 202cm defender, Essendon boasted on their website:

“When you eye off players with raw potential and a huge ceiling, it’s hard to look past the two-metre Reid.

Boasting terrific skills, athleticism, aerial prowess and footy smarts, Reid presents as a well-rounded player who shines as a stopper or half-back.” At pick 18 GWS selected Foster’s Ryan Angwin, who will join other Gippsland veteran Shane Mumford. Angwin is the latest in a list of recent Foster-based draftees – which includes the likes of Xavier Duursma, Brett Eddy, Jack Weston and Jordan Staley.

After being drafted, the Giants had this to say about him:

“Left footed medium forward/defender with silky skills and a high footy IQ. He knows how to find space and is a composed decision maker who is creative with the ball in hand. We were looking to add a player who can fill some outside roles with elite running ability, and he was the standout in that area of the draft.” And finally at pick 28 the Adelaide Crows called the name of Sam Berry. The Maffra native may have an early opportunity to impress in a young Crows outfit looking to rebuild.

After his name was called, Adelaide had this to say about Berry:

“A contested ball-winning beast, Berry is strong overhead, clean at ground level and can hit the scoreboard.

He has a competitive nature and is a strong tackler. He also has fantastic endurance, recording a 21.7 Yo Yo test in pre-season testing and finishing fifth nationally in the 2km time trial at the AFL Victorian Country Combine.” AFL Round 15 wrap – How did the Gippsland players perform? 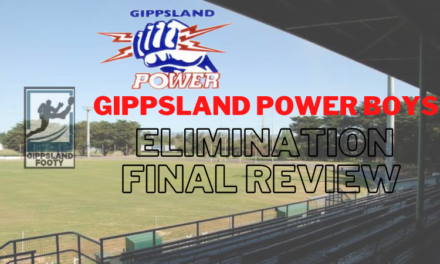