What time is the seniors game scheduled to start?: 2:30pm, Saturday September 22nd For the fourth consecutive year heavyweights Maffra and Leongatha will do battle for the senior flag this weekend.

It’s a rivalry that has dictated the narrative of the Gippsland league’s top tier competition since 2016 when the Eagles upset the previously undefeated Parrots in the decider to snatch the premiership.

In 2017 Leongatha were again minor premiers but earned the fairytale finish they let slip the year prior with a thrilling one-point win over Maffra in a grand final for the ages — a fitting farewell for departing coach Beau Vernon.

Under first-year coach Paul Carbis in 2018, only percentage separated the sides at the top of the ladder and the Parrots made it two flags on the trot with a nine-point victory over the Eagles.

This year, however, Maffra are perhaps better placed than ever before to overturn the fortunes of the last two years.

The second semi-final was a low-scoring scrap, with the Eagles advancing to the grand final by 25 points.

President John Brunt said the Eagles showed they were “capable in poor conditions” in their semi-final win over Leongatha but admitted more favourable conditions might play into the hands of some of the more hardened Parrots bodies.

“Really, every year we play Leongatha you’re in for a very hard, tight game, a physical contest and we don’t expect it to be any different this year,”Brunt said.

“When you think about it, the last two years we lost by a point and then eight points, so we’re prepared as we can be but there’s no certainties in an encounter like this.

“I really can’t see where either side has got a lot of advantage over the other. We’re very similar sides with a lot of tough bodies across the board.”

With no shortage of seasoned veterans at their disposal, Brunt said it would be incumbent on some of the younger Eagles to step up and provide support.

“Our older, seasoned performers stand up week in, week out with the likes of (Ed and Alex) Carr boys and Danny Butcher,” he said.

“Other players like Tom Jolly, Kade Renooy and Mitch Bennett are always big-game players, as is Johnny Butcher, but I really hope our younger brigade stand up because that’ll be the difference.”

The Parrots had slim player pickings for the first half of the season with a handful of first-choice premiership players unavailable through injury or other commitments.

Absent for Leongatha in their round 10 loss to the Eagles were Hayden Browne, Tom Marriott, James Lloyd, Sean Westaway and Cameron Stone.

Leongatha coach Paul Carbis said a boost in available personnel for the second half of the home and away season had brought with it a lift in performance for the Parrots.

“We’ll back ourselves in based on how we’ve gone, especially in the second half of the year, and we learnt a lot from the second semi and the boys are keen to redeem themselves from that to win the flag,” Carbis said.

“It’s not going to be easy, they’re playing good footy, and they’re strong on every line.

“Their backs got the better of us last time so our forwards have their work cut out for them and they know that.”

Carbis admitted the prospect of making history by winning three flags in a row was “pretty special” and a motivating factor for the playing group.

“Not many have won three in a row and we recognise the opportunity we’ve got ahead of us,” he said.

“We’ll be looking at the way we play and we understand them enough to know that whoever executes best on the day will get the win.” 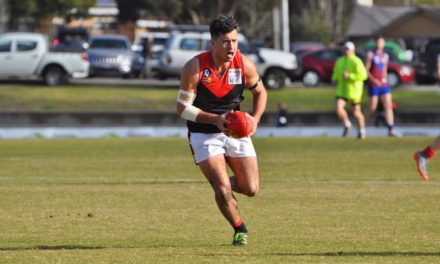