originally published by The Great Southern Star on 28th August 2018.

The future of local football and netball will be decided this Friday, August 31. AFL Gippsland’s review committee will release the results of the latest league review in four locations; Bairnsdale, Traralgon, Koo Wee Rup and Mirboo North.
The results will be given simultaneously. Potentially, this review could alter current leagues, as well as the senior and junior structure. Alberton Football Netball League president Barry Stride said the best instance would be two more sides joining the competition. Alberton was left depleted after five teams merged into the newly formed West Gippsland Football Netball Competition.
In 2017, Alberton had seven clubs competing. DWWWW Football Netball Club went into recess for the 2018 season, taking the club count down to six. Whilst it was a challenging season with a repetitive fixture, Alberton proved it is a strong league with fiercely competitive clubs. The competition at the top of the ladder was tough, resulting in an exciting start to the finals series. In the qualifying final, it was the battle of the creeks with Fish Creek taking on Stony Creek. It was an arm wrestle to the end and the game went into overtime. Spectators were on the edge of their seats as the two sides struggled to claim the first ticket into the premiership match. Ultimately, Fish Creek earned its place by two points. In the elimination final, Foster battled it out with Toora. It was another close battle. Unfortunately, the game was called off with nine minutes to go due to a severe injury. By this stage, Foster was only five points in front in another thriller. This culminated in a nail baiting preliminary final, in which Foster earned its way into the final showdown with just one point difference against Stony Creek.
The same strength is shown on the netball court, with local representatives performing exceptionally well at interleague. Mr Stride said Alberton has always demonstrated a high standard of football and netball, and the reduced fixture had led to opportunities to strengthen social connections between clubs. However, without two more clubs, the future is grim for the league, putting a strain on avid footballers and netballers from Tarwin, Toora, Foster, Meeniyan, Stony Creek and Fish Creek.
Mr Stride said the community had rallied between the Alberton league. A petition was launched and well received. The petition called for signatures to support the league in gaining two to four extra clubs. It was presented and heard at a fair hearing. 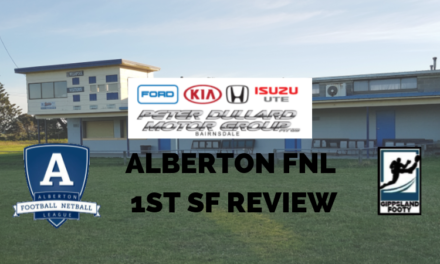