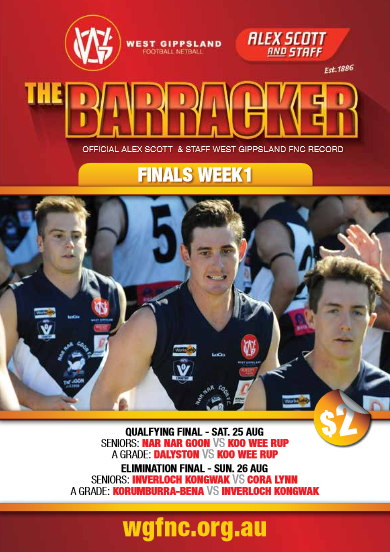 What time is the seniors game scheduled to start?: 2:00pm, Saturday August 25th 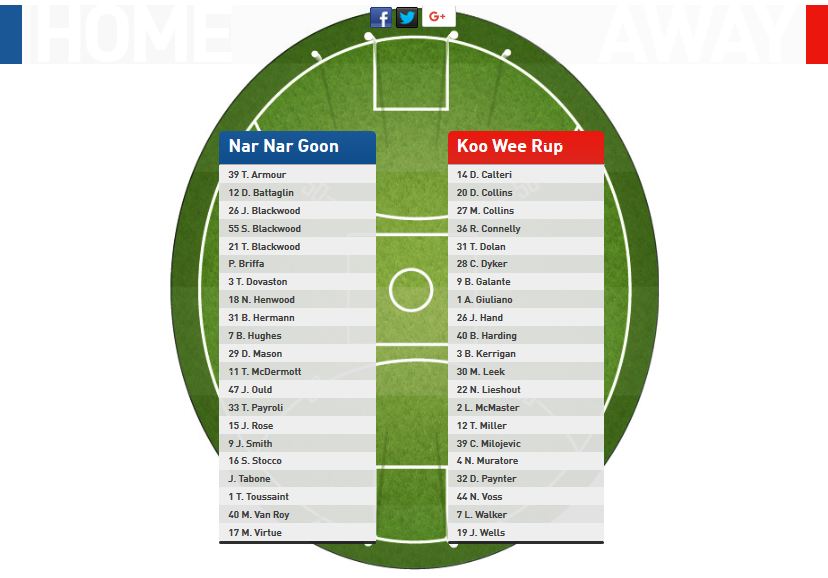 It’s only fitting that these two sides were separated by just percentage on the end-of-season ladder – it just adds to the build-up and the spectacle of what looms as a dead-set Saturday blockbuster.

Two of the biggest supported clubs in the WGFNC, with what’s already a long and storied rivalry, Nar Nar Goon and Kooweerup just seemed destined this year to meet on the finals stage.

And with squads built for success right here and right now, neither club can wait for 2pm this Saturday.

“We’re going into it happy that we have a home final but they’ve beaten us twice pretty convincingly,” said Demons coach Ben Collins of the unusual circumstance of his club actually hosting the qualifying final.

Collins acknowledged he and his coaching staff would have to “change it up a bit” to match the Goon on this year’s form – two convincing wins to Dean Blake and his boys.

But this time last year, the Demons were locked outside of the finals series looking in – having missed out on percentage.

This time around, Mad Monday will have to wait. Their chance for glory awaits them first.

“They’ve used the footy really well (in both Round 8 and Round 17), they’ve got a really good game plan – and we’ve got to try and contain that,” Collins said of the task at hand.

“They’ve taught us a lesson twice in a row now and we saw their best a week and a half ago.

“They move the ball with speed and don’t second guess themselves – they don’t look like they have designated ball users, they just go to the open man.

“The key to footy these days is pressure – that’s what we’re all about – and they just pull the trigger and go for it.

“For us to stop that we need to shut that down and lift our pressure.

“We’re going to take a couple of guys who haven’t played for four or five weeks, but we feel it’s a calculated risk.

“We need to change things up to try and get near them.

“We’ve been very much one soldier out, one in all year.”

That’s the thing though – have the Demons actually seen the Goon at their best? It’s no secret that the Goon, while winning games, has struggled mightily for consistency over a full four quarters throughout the season.

And that could be the danger for the Demons. What if ‘The General’s men’ put four quarters of footy together on Saturday?

For now though, it’s all hypothetical and we’ll have to wait until Saturday for the answers.

And Collins, for his part, wouldn’t have cared where the game takes place.

“In the end I’ll play them on the Hume Highway!” he said.

“And I’m sure they’d have the same attitude.”

Where is it being played?: Inverloch Rec Reserve

What time is the seniors game scheduled to start?: 2:00pm, Sunday August 26th 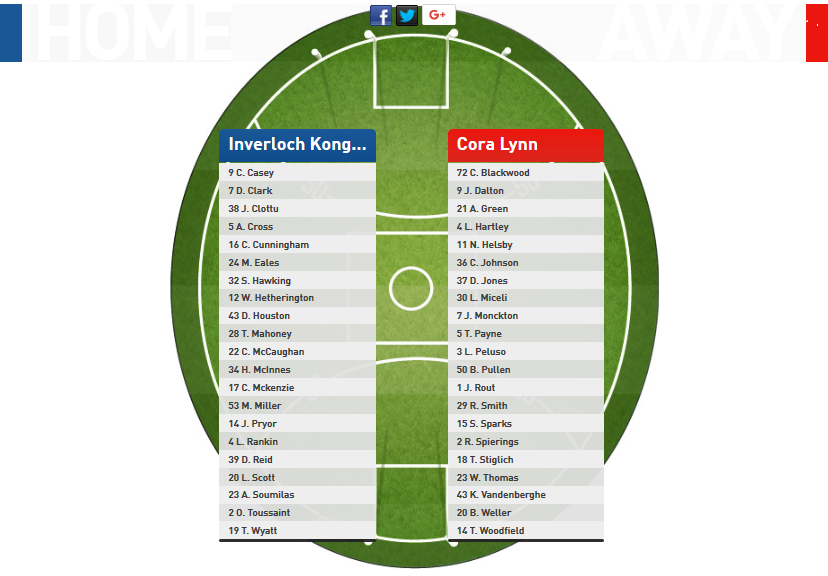 It’s less than two years old, but make no mistake – the Sea Eagles’ relationship with the Cobras can only be described as a rivalry.

David Main’s Cora Lynn heads back to Inverloch this Sunday to take on Ben Soumilas’ reigning premiers. We’ve all seen it before.

But we’ve never seen them clash in an elimination final – with the Sea Eagles having struggled to continually find their best footy, and the Cobras buoyed by a finals berth despite being in a rebuilding phase.

“Early days this season we’d won games and I didn’t think we had our strongest side on the park,” Soumilas said in the lead-up to this weekend’s blockbuster.

“I felt early days we were getting away with being a good experienced team and opposition teams weren’t as strong.

“But Phillip Island is incredibly hard to beat at home any year, and on the weekend they came out playing really good footy. I don’t feel like we’ve played really good footy for weeks now – we haven’t played our standard of footy.”

“We’re at a tricky spot here.

“You’d have to say Cora Lynn are our rivals because we’ve played them six times in this new competition and it’s 5-1 our way, but last time we played they beat us.

“It’s really funny for us to go in as underdogs.”

Whether or not anyone truly believes the Sea Eagles are the underdogs for this clash is another thing.

But Soumilas and his boys are well aware of the Cobras’ ability to maintain their confidence this year – despite missing some key names; players who departed in the off-season.

“We said they’d have to find new ways to score (without the likes of Nathan Langley and Ryan Gillis) – that they’re not as predictable,” Soumilas explained.

“They struggled a bit early but certainly adjusted and have come home really strong.

“They’re a capable side like the other finals teams.

“We’ll have to play our best footy this weekend – we know that – and we maybe haven’t played that all year.

“All good clichés are good because they’re true – we’re just one week at a time now because we have to be (heading into an elimination final).

“I think one of the things that’s obvious about them (the Cobras) is that they believe in themselves. I think that’s probably half the job done. It’s pretty impressive after losing to us five times that they thought they could win. The longer the game went on last time, the more they believed.”

And even though they’ve only been coming up against each other for less than a year, these two sides know full-well how the other plays.

“I think they’ve still got some really engrained habits in the way they play,” Soumilas said.

“If you don’t enter the forward 50 well and let it come back out easily, they have guys who’re cleverly waiting out the back.

“They give you chances to score, but if you don’t they’ll slingshot it back pretty quick.”