No boundaries for Gittos | via Latrobe Valley Express | Blake Gittos may only be 17 years old but he boasts the wisdom and resilience of someone well beyond his years.

On Saturday he became the youngest person in the Latrobe Valley Umpires Association to umpire 200 games of football. He has learnt a lot along the way.

On how he deals with the inevitable flack and criticism that comes with umpiring, Gittos said he rarely takes it personally.

“When you cop a spray you just need to brush it off,” he said.

“They’re not angry with you. They’re angry because it didn’t go their way and they’re upset with themselves so I don’t let it get to me.”

The double century came in the Mid Gippsland senior competition between Hill End and Yarragon and the umpiring fraternity turned out in full force to celebrate the milestone.

After six years in the business Gittos has come to revere his peers who have become somewhat of an extended family.

“It’s pretty much another family for me,” he said.

“Being an umpire, I love it because you have another family and it’s an easy job because there’s no resume needed and there’s always other people out there helping you.”

(There is more content at the articles original source. To view original article in full visit http://www.latrobevalleyexpress.com.au/story/5589557/no-boundaries-for-gittos/?cs=1588) 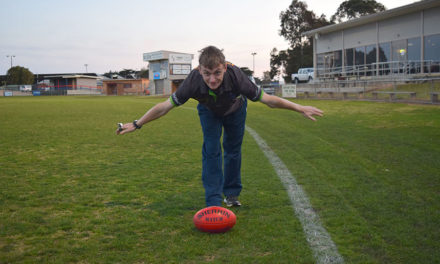