Success on the football field, they say, is built on a great defence.
And Leongatha certainly had that in Saturday’s preliminary final against Moe with Chris Verboon, Col Sanbrook and Josh Schelling leading a magnificent “back seven” that earned high praise from coach Paul Carbis after the team’s hard-fought, 22-point victory.
Others in the back half included Sean Westaway, Rhett Kelly and Tim Sauvarin, with Stone, Hopkins and Cooper among those prepared to get back and help out.
He acknowledged it was a bruising affair but liked the way all players stuck to the task throughout.
“That was the pleasing part about it. I thought our back seven were super today, the way they went about it,” Carbis said in the rooms afterwards.
“We probably just didn’t get enough reward for effort. If we’d have kicked a bit straighter, we probably would have put the game to bed a bit earlier,” he said.
Three goals in quick succession, in a low scoring affair during the opening minutes of the third quarter, after a goalless second term, kicked by Tom Marriott, Jack Ginnane and Chris Dann, virtually iced the deal.
But it was the superb work of the defenders all day which paved the way to Leongatha’s fifth straight appearance in a Gippsland League Grand Final and a chance to make club history with the first-ever three-peat.
Col Sanbrook set the tone early with nine kicks and a handball in the first quarter, clearing the danger zone at will, and both Schelling and Verboon intercepting and competing strongly.
Their efforts were augmented by some courageous efforts from the likes of Kyle Cooper, cruelly cleaned up in brave marking attempt in the first quarter, young Jack Hume sustaining a heavy head-knock in another contest and Rhett Kelly coming up spitting teeth after a crushing encounter. Several others distinguished themselves in similar fashion but despite liberal bruising throughout the group, they’ll all be available next Saturday.
Cade Maskell is also a strong chance to make a return.
It wasn’t a game for the faint hearted, nor will this Saturday’s clash against old foes Maffra in the big one at Traralgon.
The first half was a fair-dinkum arm-wrestle, much of the play between the forward arcs, and it’s a good thing for Leongatha that big Spencer White didn’t have his kicking boots on because he had plenty of opportunities, especially in the second quarter when Moe had 11 forward 50 entries to the Parrots 15.
They’d been well served by Ceppi (37), Blaser (2) and Wood (6) and had their share of good chances to score.
Leongatha was dominant in the first quarter, producing 19 inside 50s to Moe’s six and there’s little doubt the absent Maskell would have swallowed several chances.
But, as it was, the Parrots struggled to finish their work up forward after two opening goals, both featuring good work by Josh Hopkins, first getting the ball over the back for a speedy Cam Stone to take advantage and then Hopkins himself goaling as the Parrots started to take control on the back of Moe turnovers and a winning half back line.
All the Parrot defenders appeared to be on top through the scoreless middle stages of the first term. Marriott hit the pack later and might have capped it off with a goal and both Dunne and Lloyd had late chances that didn’t produce the desired result.
The second quarter was a more dour affair with Blaser playing well for Moe and a mistake by Nagel could have been costly when White missed a snap from close range.
Olden, Marriott, Hume, Bowman, Hopkins, Davison, Forrester and Ben Willis in the ruck were all active but Tyson Biffin, Joel Bragagnolo and Charlie Rieniets were equal to the task down back and Leongatha were unable to take advantage of their 15 entries either.
Moe hadn’t played well but were only 10 points behind at the long break after Jacob Woods finally broke the ice for them midway through the second term despite an earlier smother by Westaway and another courageous act by Cooper.
Forrester was cleaned up and Hume was off with a knock as the Parrots limped to the sheds for the break.
But they came out with renewed vigour after the break and those three early goals by Marriott, Ginnane and Dunne gave them the breathing space.
The start of the last quarter was characterised by several intercept marks and clearing runs by Verboon, one capped off down the other end by Marriott who kicked the sealer, and their only goal of the last quarter. Moe’s spearhead White finally got one himself while his opponent Schelling was off the ground, but it was too little too late.
Verboon, Sanbrook and Schelling led the way all day off half back and were clearly one, two three in everyone’s best player list.
But the Parrots didn’t have a passenger in a hard, bruising contest with the coach commenting after that it would be more a recovery week on the track than a fitness top up. 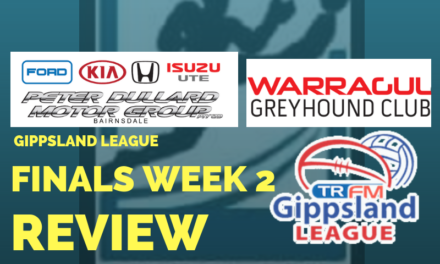