Catani’s season ended on Saturday with a 99-point loss to Longwarry at home.

The Blues had missed finals by a big margin, finishing in seventh place with just 28 premiership points.

In sixth place was Buln Buln, who finished their season games ahead of Catani, on 40 premiership points.

With Ellinbank two games in front of Longwarry, both sides did not have much to play for. Longwarry were assured a finals berth but no matter the result would not be able to snatch that much sought after week off from the Eagles.

The first term saw the Crows assert their dominance, kicking five goals four to open the game. Catani returned serve, but not by much.

The Blues managed one goal two behinds in that first quarter. Both sides more than doubled their scorelines in the second term.

The Crows led the Blues by 44 points at the main break. But the Blues had had enough by the third quarter. They added just two behinds to their tally.

The Crows also slowed down somewhat. They added three goals and five behinds to lead the hosts by 63 points.

By the fourth quarter, there was nothing the Blues could do as Longwarry rolled the steamroll over their hosts in the last few minutes of their 2019 season.

A flurry of Longwarry goals, 10 to be exact, put Catani in their grave.

The Blues tried to fight back, adding four majors and five behinds before the final siren sounded on their season.

Buln Buln sat on 40 premiership points. Nyora were on 38. A Nyora loss to Lang Lang was always unlikely, but anything was possible.

The Lyrebirds had come close to victory last time the sides met, so nothing was written in stone.

Buln Buln came within a goal of a draw in the dying minutes of the game but the Eagles proved too strong, hitting back with a late goal to put a final nail in the visitors’ coffin.

Ellinbank made their case clear in the first term with four quick goals and five behinds.

Buln Buln meanwhile were struggling to keep the ball in their half and could manage just one goal in the first quarter.

The Eagles’ dominance continued in the second term. Buln Buln had opportunities to score too but squandered those and walked back to the rooms at halftime with just three more behinds to their tally. Ellinbank’s momentum slowed in the third term and they could put just one more major through the main target.

They continued that confidence into the final term, putting more pressure on Ellinbank until Hayden Baker finally broke through the Eagles’ defence with 15 minutes to go.

A major from Ellinbank’s Sean Phelan put a speed bump in the Lyrebirds’ dreams of a comeback but another goal from Hayden Baker with six minutes left on the clock gave his side another boost.

Another goal from Buln Buln would have caused a draw and both sides fought it out in an intense and animated final five minutes. A free kick to Ellinbank was paid in the dying seconds and then the Eagles’ Mitchell Cowan shanked an opportunity from 35 out, resulting in an extra point for Ellinbank before the siren finally sounded, declaring an Eagles victory.

The away side overwhelmed the Bombers with their ball pressure and presence in the contest, racing home to record a 29-point victory and book a qualifying final with Longwarry this week. It was Nilma-Darnum who started the most effectively, taking advantage of their chances with efficiency and kicking five straight in the first term.

Poowong also played positively, spreading the ball well and attacking with speed, but their four goals and one behind saw the home team take a five-point lead into quarter-time. The Magpies turned up the heat in the second term however, applying strong pressure to the Bombers players, especially in the middle. This saw the home team relinquish a lot of the possession and fail to create more than one scoring shot, which they kicked for a behind. Poowong booted three for the term, with Hazendonk making his presence felt up front, and took a 44-31 lead into the main break. The away side continued their momentum in the third quarter and blew the game open. The play of Sullivan and Doria was tearing the home team to shreds, with their pace and efficiency with the ball a huge key to their third term push.

Hazendonk tool advantage of this up front for the side, and while the Bombers did manage to kick three majors, the Magpies’ four goals and four behinds saw them take a 72-49 lead into the final break. The fourth quarter was much of the same for the Magpies, who had well and truly gained control of the game. Hazendonk kicked the remainder of his five goals for the game, and the side held the Bombers to just two majors in the quarter, winning the matchup 91-62.

In a tidal turn of conditions, Nyora have taken Saturday’s sun to toast the Lang Lang Tigers – launching them into a slightly lucky finals campaign.

In what was a game involving two separate scores – the margin of Ellinbank and Buln Buln left just seven points, allowing Nyora a spot in the finals.

Ruckman Nick Carrigy played his 150th game. He was up and about – giving first opportunity to 21-year- old Jesse Heylen who was also celebrating a milestone with 100 senior games.

Heylen played an impressive role out of the middle, his best game in recent weeks. Brad Arnold put together another strong performance, adding to the spread of Nyora contributors.

Mat Miller sat out most of the game with a knee strain, but is expected to be available for this week’s game.

Nyora can play a classy brand of football, most suited to decent conditions. They hope their clean and physical touch will be enough to chase down last year’s grand final mishap.

Yarragon had only pride to play for on Saturday, but a 99-point loss to Neerim Neerim South assured the Panthers would finish off the season disappointed.

With Neerim Neerim South in fourth spot on the ladder and Yarragon in eighth, there was little incentive for a struggling Panthers outfit, with the Cats already locking away a finals berth.

Yarragon hit the target once, finishing the quarter on one goal one. But they regained some of their composure in the second term, adding four majors to their side of the scoreboard to bring their tally to 5.2-32.

However, Neerim Neerim South had accounted for that my halftime, kicking six majors to hold the Panthers off by 24 points at the main break.

A flurry of goals came in the third term, as Lang Lang, now fully aware of their fate, capitulated, letting the Cats add a huge nine goals to their scoreboard to bring their tally to 18.7-115.

Yarragon returned serve, but not by much. They added two goal before the start of the final term. In the last quarter, they kicked another goal and another behind.

The Panthers finished their final game of the season with 8.3-51. Neerim Neerim South will now sail into finals and their match up with Nyora after adding six majors in that final quarter to finish on 24.13-157. Chris Urie was the Cat’s best man on the day and will be a vital element in the Neerim Neerim South squad come the weekend.

Urie had a stellar outing, kicking five goals to help his side to victroy. Jackson Ward, Kody Wilson, Toby Bayne, Jack Deen and Josh Morrison were also important on the day. Ellinbank DFL ladder and leading goal kickers after Round 15 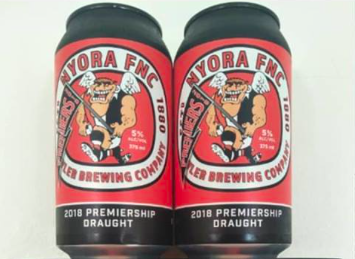