Stratford and Lakes Entrance will clash in the East Gippsland senior football grand final this Saturday, the Seagulls booking their place in the decider with a comfortable 28-point victory over Wy Yung on Saturday at City Oval.

Two weeks ago the Swans booked a grand final spot with a dominant display against the Seagulls, but the latter regrouped and sent the Tigers packing in the preliminary final with a pulsating second term setting up the win.

The Tigers earned a spot in the prelim thanks to a narrow win over Lindenow in the elimination semi final, but when the match was there to be won on Saturday, it was Lakes Entrance that lifted.

The Seagulls charged out of the gates and dominated, however Wy Yung responded and was within touching distance heading into the second stanza.

In the second quarter it was all Lakes Entrance as its midfield, led by Alex Saunders, got on top in the clearances and while Wy Yung looked dangerous when it went forward, supply was the issue.

The Tigers were simply unable to generate enough forward 50 entries to keep up with the Seagulls, whose half time lead of 38 could have been more had it kicked straight.

In the second half Wy Yung started well and pegged back the lead by three quarter time, however Lakes consolidated its lead in the final term and earned a chance at its first flag since 2003.

After being up by eight points at the start of the second quarter, the Seagulls set the tone with Tom Smith winning a clearance and finding James Gibbs 40m out on a slight angle two minutes in.

Gibbs’ set shot missed to the left, but there were warning signs for Wy Yung as it struggled to move the ball into its attacking half.

In the next two minutes the Seagulls missed two more gettable goals and were made to pay with Wes Russell drawing the Tigers within four points after they put together their first clean play of the term, transitioning from defence to attack.

That would be as close as Wy Yung got for the rest of the match with Lakes Entrance finding a gear that the Tigers were unable to match.

An unchecked Virgil Puruntatameri got out the back of the contest and kicked his second goal of the match at the eight-minute mark after Wy Yung was unable to kill the ball in a three-on-two aerial battle.

Moments latter Gibbs added another after Puruntatameri found his coach in the goal square.

Two more Seagulls’ misses followed, but when Smith took a strong contested mark that should have been brought to ground, and goaled from straight in front, Lakes Entrance jumped out to a 25-point lead 13 minutes in.

Russell cut the margin to 19 points after a free kick five minutes later, however John Hooper pushed the Seagulls’ lead back out to 25 points a short time later with a long set shot major.

Lakes Entrance ended the second term on fire with Puruntatameri, who was often finding space out the back of the pack when his man was unable to make an impact in the contest, kicking his third and fourth goals in quick succession to give his side a 38-point half time lead.

The Tigers would need a big lift in the third term to have any chance of claiming a come-from-behind victory with coach, Shaun Mooney, urging his side to take the game on.

“We lost our structure in that term. If they’ve got an extra back, don’t be scared to call another player back and get them to man up,” he said.

“We have no other option now, but to roll the dice and back our mids to win the ball. We have got to get the ball. They are a good side when they have their tails up and look what they have done to us.

“It all starts at the contest. We have got to show something. Don’t go into your shells, we have to go now.”

Mooney’s words seemed to have an impact as the Tigers returned to form after going missing for large parts of the second quarter.

However, it was Lakes Entrance that drew first blood with Ryan Marsden, who was playing his first senior game of the season, cutting off a poor Wy Yung kick and finding Gibbs, who made no mistake from his set shot from 45m out.

Alex Crowe scored the Tigers’ first major of the term after he earned a holding the man free kick. Brent West followed suit shortly after as he soccered the ball over the line following a scramble in the goal square.

Brodie Anderson made it three Wy Yung goals in five minutes after he managed to get out the back, cutting Lakes Entrance’s lead to 28 points.

However, Puruntatameri once again made the most of his man leaving him to fly for a mark, slotting an easy goal from 15m out.

Wy Yung didn’t relent and continued to win the ball out of the middle with Daniel Perrin and Russell kicking goals in quick succession to move the Tigers within 22 points.

For the next 10 minutes neither side was able to add to their tally with Lakes Entrance doing well to hold back a refocused Wy Yung.

In the second minute of the last term West earned a holding the ball free, and a 50 penalty brought him within range and he made no mistake.

The Seagulls’ once comfortable lead was now just three straight kicks, but Gibbs took a one-on-one mark deep in the pocket and nailed the set shot to turn the tide back in his side’s favour.

The Seagulls managed to slow the game down, however a Perrin goal at the 17-minute mark kept Wy Yung in the game.

Gibbs seemingly kicked the sealer for Lakes Entrance three minutes later and when Kane Thomson was awarded two 50m penalties, which resulted in a regulation set shot from the goal square, the match was over.

There were danger signs for the Tigers early in the first term as Puruntatameri was everywhere, kicking the first two behinds of the match.

In the dying minutes Puruntutameri bagged his first goal of the match as Lakes Entrance held a slim margin at the first break.

In the second term it was one-way traffic as the Seagulls all but sealed the win and while Wy Yung fought hard in the second half, it was unable to make up for a costly second stanza.

For Lakes Entrance, Puruntutameri, who played in defence against Stratford in the second semi final, finished with a five-goal haul after being allowed to rove packs and find space as he pleased, while Gibbs also slotted five after imposing himself at key points in the game.

Saunders had the ball on a string, especially in the second term when he won countless clearances, and Marsden and Brett Carroll were also impressive.

For Wy Yung, Russell, who kicked three goals, looked dangerous on the lead, while young gun, Nicholas Ward, collected a couple of crucial touches in the second half.

Rob Brick was consistent in the middle of the ground for the Tigers and Josh Broome, who played in defence for a large part of the first half, was also influential. East Gippsland FNL ladder and leading goal kickers after Round 11 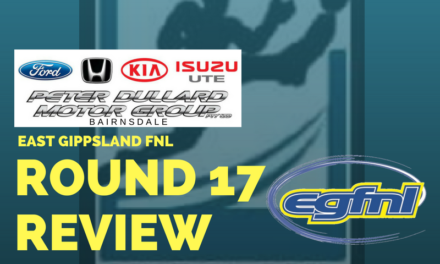 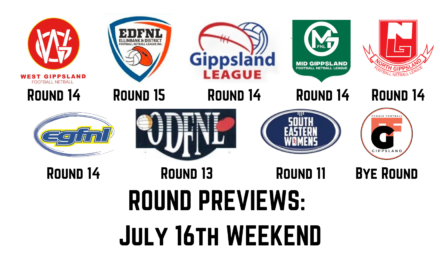