Gippsland Power has appointed Leongatha’s Rhett McLennan as the Under 18 TAC Cup Coach and Regional Coaching Director for 2019. It is a full-time role.
McLennan, who played a total of 306 games of football including three senior premierships, has been in coaching roles at major league country and metropolitan clubs for 14 years.
Following his retirement from senior football he has been involved at Gippsland Power for the past four years as an Under 18 assistant coach and the past two years coaching the Under 16 Gippsland Power Team.
This season he accepted the new position of Development Coach for the Gippsland Power Football Club as well as taking on roles with the Vic Country Under 16s and Under 18s.
McLennan, is excited about the opportunity to coach in the TAC Cup at the elite junior level.
“I’m really looking forward to the challenge,” McLennan said this week.
Having been involved with Gippsland Power for several years now, McLennan knows what it takes to reach the highest level having done pre-seasons with both the Brisbane Football Club and the Carlton Football Club.
“The role is not new to me as I have been here for four years and coached a lot of these boys in the Under 16 Gippsland Power team over the past two seasons,” McLennan said.
“I’m really looking forward to the excitement of getting out there and working closely with the boys at training and helping them reach their goals and dreams.” 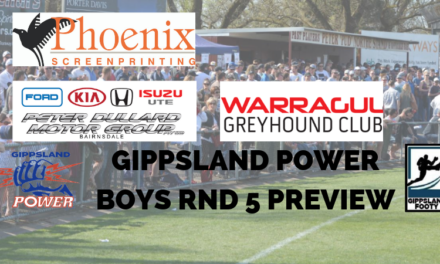