The Two Tigers met and fought out an interesting duel with the Mirboo North version successful over the Foster version by the minimal margin of one point. In what was an exciting day for both teams. It was the Indigenous round for Mirboo North with special jumpers designed by Marilyn Fenton, the smoking ceremony welcoming all present to the country. Early entertainment was provided by the Boorun Boys Dance Troupe. The football was wild and manic with very little between the two camps and in the wet and slippery conditions  goals were hard to get with both team struggling to snaffle six apiece. Ben Campbell had the Mirboo North Tigers on the board within two minutes but goals were at a premium with Mirboo North taking a five point lead at the break.  It was never going to be easy with both teams slipping and sliding in the greasy conditions. By half time Mirboo North still held on by five points. Foster Ruckman Mitch Allott was having a good day in the ruck but his rovers were slow to pick up his tap downs. With no recognised full forward Mirboo North had to rely on Coach Josh Taylor to show them how to kick goals finishing with two excellent six pointers. Jacob Blair was always busy for Mirboo North while Julian Blackford and Troy Van Dyke had a good battle with each other. Mirboo North snuck away from Foster in the third with Liam Nash starting to get into the match, the MN Tigers doubled their score to six while Foster scraped in 1-1 as Mirboo Nth led by 18 points. The final term Foster lifted with Tim Wigney and Michael Green getting into the action, with the wind Foster were able to gain important scores and with only minutes to play they levelled at 44 points each but the Tiger spirit at Mirboo North showed through and they forced a behind with only seconds remaining to win the exciting match by one point.

It was a rug and thermos day at Hill End where the Hillmen bounced back to defeat Stony Creek on their first journey to Willowgrove, apparently a few got lost actually ending up at Hill End.  It was Amburupa Uliando’s 100th game for Hill End but for once he didn’t figure in the top six best players but still put in a great effort. It was the dreaded duo of Chase Saunders and Coach Mick Santo who provided the thrills for the Hill End side with 10 goals between them, kicking five each.  Hill End proving too classy in the overall result of the match winning by 112 points  to keep top position on the ladder . Best players for the Hillmen were Dane Fawcett, Tyler Pratt, Jack Son and Nathan Balfour while for the Lions Jai Bright shone out, Sam Marriott, Ossy Brennan and Andrew Logan all tried hard against solid opposition.

Boolarra jumped Morwell East early in the match in good conditions but as the slight rain made conditions greasy plenty of opportunities went missing as players continually dropped “easy” marks. The pressure was on Morwell East as Boolarra had nothing to lose. They surpassed last week’s score in the first quarter and held a five point lead by the first break. There didn’t seem to be much wind but the Northern end seemed to be the scoring end as Morwell East rallied in the second term with Nick Grainger and Daniel Hutchinson up forward they made it look easy to score goals. Boolarra struggled to get forward and by half time Morwell East were ahead by 21 points. Boolarra lifted after the break and with Jimmy Harry look-alike Brendon Mason active the Dees fought back, Michael Cleaver up forward made a big difference and scored three goals to get within three points of the East. Brendan Mason goaled to give Boolarra a three point lead with minutes to go. Boolarra in defence criss-crossed within Morwell East’s 50, seven times to milk the clock but their good work came unstuck and Morwell East posted a behind, touched on the line as three quarter arrived with the Dees two points up. Morwell East came our rocking in the last term and within four minutes Dan Hutchison has wrested the lead off Boolarra with a goal. Boolarra were penalised twice for after play incidents and paid the price with the East scoring two majors. Morwell East appeared too slick with their speedball, no time to stop and prop they just kept running. Boolarra struggled to cross the centre and forward Michael Cleaver looked a lone figure in their fifty as his team mates were all chasing the ball. The East were doing all the attacking having the ball in their 50 zone 15 times in the last term scoring five times. The East running out winners 12-9 to 10-5. Rob Michaelides scored three with Daniel Hutchinson and Nick Grainger scoring two each. For Boolarra, Michael Cleaver bagged five. Morwell East’s best were Rob Michaelides, Matt Cunningham, Joel Soutar and Frankie Marks while for Boolarra, Brendan Mason, James Holmes, Michael Cleaver and Daniel Wilson all played at their best.

It was Tarwin’s third successive win over MDU, having won the last two in 2019. In less than perfect conditions the final result was a six pointer to MDU, their closest result since 2015 when MDU won by 2 points. MDU led all the way in a tight match with very little between the two teams with the scores never varying more than 12 points at any given time. Tarwin did however have a last quarter surge to almost wrest the match out of MDU’s grasp, the Sharks booted three goals to one but could scrape in another to tie the match as MDU ran out winners 8-8 to Tarwin 8-2. For the Dees, Stephen Hawkins kicked three goals while Tarwin’s Matt Williams bagged a couple. For MDU, Sam Wilson, Michael Smith, Zak Calvert and Tim Harris Junior all got the awards. For Tarwin Lachlan Howes, Matt Zagni, Rob Brack and Ben Ellen were voted as best.

Newborough produced their lowest score against Yinnar in 57 years, their previous was 1-3 way back in 1964. It was a big turn-about after their massive tally the previous week. Against Yinnar, their radar was adrift with their only goal coming in the third term. They had a third less scoring shots than Yinnar with a tally of 1-9 which doesn’t truly reflect their performance against the Magpies. Yinnar put in a solid performance with 11 players claiming goal credits, the best were Seb Famularo, Kane Grinstead-Jones and Daniel Johnson all with three each as Yinnar won comfortably 20-9 to Newborough 1-9. The last time Yinnar kicked over 20 goals against Newborough was in 2008.

It was Sponsors day at Thorpdale and their support was rewarded by the Blues having their first ever win over Toora. It was a complete turnaround from their fade out at Newborough the previous week, but it took half a game to shake off a persistent Toora team who were only 10 points down at the half way mark. By three quarter Toora were still in the match but Thorpdale “did a Newborough” and banged on 7-2 to 2-1 in the last term to take their third match for the season. Thorpdale’s young guns Jarrah Burgess and Heath Ferguson kicking three each for the Blues while Tom Keily stood alone for Toora with five goals. Best for the Blues were Shannon Pickering, Jarrah Burgess, Joel Monger and Heath Ferguson. For Toora Harley Hoppner was again their best with good support from Ben Wilder, Matt Ponton and Fergus Cashmore. 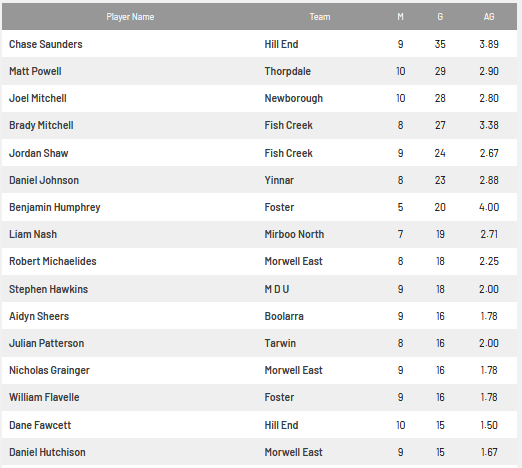