Korumburra-Bena travelled to Bunyip with the aim to win the match and it was successful. The Giants kicked the railway end into a strong breeze.
Bunyip attacked early and goaled. A Giants’ turnover allowed the Bulldogs to kick a second, but later in the quarter the Giants grabbed two vital goals into the wind to trail by five points. At quarter time, the score was Korumburra-Bena 2.0.12 to Bunyip 2.5.17.
The Giants had the wind and went into attack, slotting two quick goals in the second quarter. When Beau Anthony kicked the Giants’ third, they looked in control. The Bulldogs attacked, which only resulted in points until they kicked a late goal on the siren. Going into the long break, the score was Korumburra-Bena 5.0.30 to Bunyip 3.11.29.
The third quarter saw Bunyip attacking strongly. The Giants made a couple of errors, which allowed the Bulldogs to kick two goals and take the lead. However, the Giants’ defence stood firm and it kicked a late goal to only trail by eight points at the last change.
Korumburra-Bena coach Ben McGee moved Matt Edwards into the ruck and it paid dividends. Edwards proved too mobile for his counterpart and his impact on the quarter proved vital for the Giants. The Giants were over running the Bulldogs. Jye Celebrine kicked a pearler from the boundary line and further goals to Edwards and Jake McMilan saw the Giants home by 15 points to win its fifth game of the season.
The Great Southern Star

In arctic conditions at Beswick Street in Garfield, it was the Cobras who froze out the home side winning their mini-elimination final to claim the last spot in the finals race, 13.7 (85) to 7.5 (47).
Both sides headed into the game knowing how simple the equation was: win, and stay alive; or lose, and it’s season over. Hayden Stanton’s young side was gallant throughout the contest and trailed by just 20 points with a quarter left to play, but the Cobras had the answers right when they needed them most. The outside run of Jeremy Monckton, the forward polish of Jai Rout (three goals), the inside ball-winning of a clearly injury-hampered Chris Johnson, the ruck work of Billy Thomas, and defensive nous of skipper Tim Payne were all particularly telling.
For the Stars, Tanner Stanton and Jayden Goumas stood strong – as did Tyler McDonald (two goals), who faced the unenviable task of battling Thomas in the middle for much of the day following a nasty ankle injury to Corie Intveen the week prior.
Russell Bennett - Pakenham Gazette

The Demons won by more than 100 points with an explosive second half of 12 goals to one setting up the 19-15 (129) to 3-4 (22) win over Kilcunda-Bass.
The Demons forward pairing of Daniel Calteri and ex-Bass premiership player Jason Wells ran riot up forward, Calteri finishing with a bag of six goals along with Wells who nailed four. Wells capped off a terrific home and away season winning the league’s goal kicking trophy with 79 goals, 24 more than IK’s Toby Mahoney who sat in second place with 55 snags.
The Demons kicked with the breeze in the opening quarter and got off to a great start with the first four goals of the game with Wells and Anthony Giuliano getting things started. The Panthers defence did hold strong given the conditions and didn’t let their opponents get any easy possessions. Coach Damien Holmes was leading from the front along with defender Aiden Paton. The Demons had a 24-point lead at quarter time, with the Bass ground holding up Well and the conditions allowing for plenty of run.
Koo Wee Rup worked hard into the wind in the second term, booting three goals which made the Panthers hopes of a comeback so much tougher. Luke Walker and Nathan Muratore were causing major headaches in the middle of the ground for the Panthers as the Demons took a 32-point lead into half time. Seven goals to two in the first half meant the Demons always had the match in their control.
Calteri and Wells enjoyed using the breeze again in the third quarter, both with goals. Nathan Voss and Luke McMaster also added to the Panthers woes as the Demons marched into the final break 65-points ahead. And despite kicking into the breeze the last quarter was just as damaging, with another six unanswered Demon goals pushing the final margin into the triple figure range.
Daniel Calteri booted six goals, supported by Jason Wells and Anthony Giuliano who bagged seven majors between them. Luke Walker, Nathan Muratore, Tim Miller, David Collins and Ben Kerrigan also helped give the Demons a ruthless edge.
Warragul & Drouin Gazette and South Gippsland Sentinel Times

Dalyston played its final game of the season against Nar Nar Goon.

This was a special occasion for the Magpies, as it was the last game for coach Paul Brosnan. Brosnan has coached the side for the last seven years, resulting in many finals berths and a premiership. Key player Kristian Butler also announced his retirement. The club appreciated his leadership this season.

The Goon were far too strong for Dalyston, with the carnage beginning from the first bounce with an eight goal first term. The Magpies were never able to recover, with the Goon all but having the result in their keeping at the long break.

Matt Rosendale playing his 200th match kicked Dalyston’s only two for the game. Michael Marotta was the stand out player for the Pies after missing eight weeks due to a collarbone injury.

Phillip Island has finished the home and away season in impressive fashion, defeating the reigning premiers Inverloch-Kongwak by 36-points and securing top spot on the West Gippsland ladder.
Football took a backseat on a day in which the local Phillip Island community, along with both the Phillip Island and Inverloch Kongwak football netball clubs united for the White Ribbon Walk in honour of Sam Fraser.
IK were a game clear on top of ladder at the start of the day but come the final siren they had slipped to fourth place thanks to a rampaging Bulldogs line up.
In an unprecedented end to the home and away season, four sides finished on the same number of wins, but the superior percentage of the Bulldogs ensured they finished on top.
The game itself was played under threatening clouds and a howling wind.
It was a finals like atmosphere with a large crowd filling the ground and both teams battling tooth and nail for the all-important four points.
It was a hot footy early on as the top two sides were desperate to make a statement early.
The Island had the aid of a strong breeze but struggled to hit the scoreboard in the opening half of the quarter.
That was until a brilliant pass from Brendan Kimber hit in-form forward Jack Taylor and the Dogs had found range.
Goals to Jimmy Taylor and Zak Vernon set up a handy 23-point lead at the first break.
After being held scoreless in the first term, IK was hoping to make the most of a strong breeze to the scoreboard end but it was the home side who stole the initiative with Jimmy Taylor kicking his second courtesy of a tidy pass from Hayden Bruce.
The home side was full of legs and when Bruce and Vernon each goaled, the Islanders were in full control with the first six goals of the game.
IK snuck one late in the shadows of half time to give them some belief heading into the main break, but the home town Bulldogs were on a mission.
The Island knew that although they had the breeze, the reigning premiers were not going to lay down.
The Bulldogs came out the hungrier with the first four goals of the quarter courtesy of Aaron Edwards, Jimmy Taylor (two) and Brendan Kimber.
But what would have pleased coach Beau Vernon the most would have been the smother from Alex Officer to stop a certain IK goal.
The final term was a real scrap with both teams out on their feet.
The Islanders was happy to make it a congested affair after doing the hard work earlier in the game.
After securing their second victory over the reigning premier this season, the Islanders have earned a week off and will return the following Saturday in their second semi-final against the winner of Nar Nar Goon and Koo Wee Rup. 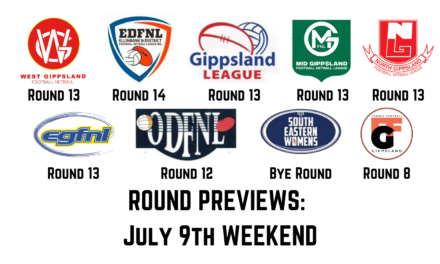