A record gate of $20,500 endured four seasons of weather at Bairnsdale City Oval on Saturday as Stratford came away the big winners on East Gippsland Football Netball League grand final day on Saturday.

The Swans were the victors in a senior football slugfest, beating a strong-willed Lakes Entrance by 10 points thanks to six goals from best afield, Josh Kiss.

Conditions at Bairnsdale were wintry for much of the game, with strong winds blowing across the ground, making life exceptionally difficult for goal kickers.

Josh Kiss booted the first goal of the match. Lakes then hit the ground running, kicking three unanswered goals as Stratford seemed to only find behinds.

Seagulls captain James Gibbs ran rampant for the latter half of the quarter, the Swans struggling to find their man and allowing far too many forward entries.

Seagull Virgil Puruntatameri kicked the first of his two goals after escaping to the goal square, and was dangerous in marking contests.

A quarter-time spray from Stratford coach Peter Morrison led to Kiss kicking a goal in the first 90 seconds of the second term, and from there it was game on — Jordan Robertson impressed with another goal soon after.

In dramatic fashion, Stratford ruckman Regan Tait was felled with a suspected broken jaw, and the majority of the team swooped in to defend him, with fights breaking out across the ground.

A yellow card was pulled on a Lakes Entrance player, who was booed off the ground by the vocal Stratford supporters.

With Tait sitting out the rest of the quarter, league best-and-fairest Lachie Heywood stepped up. Though there were worrying skill errors and unfocused football — Lakes was two goals ahead at half-time.

In the rooms, Morrison was furious about the Tait incident, but encouraged calm.

“Two goals is nothing, use Reggie as motivation,” he said.

In the third term, Gibbs played himself in defence, over-powering Stratford’s nimble small forwards, but the Swans could smell blood — Lakes Entrance was held to a solitary behind, towards the end of the quarter, as the Swans used the conditions to gain momentum and kick 2.3, pushing ahead by two points at three-quarter-time.

Tait returned to huge cheers half-way through the quarter, and despite his injury was still in the mix, providing solid opportunities to teammates.

Stratford kept pushing in the final term, with defender Justin Slattery throwing himself at the ball, and midfielders like Dylan Nikolajew and Lewis Bolton tackling well to prevent the Seagulls from setting up any plays.

With about eight minutes to go, Lakes Entrance seemed deflated, with Stratford gaining more of the ball in its forward 50 and players taking shots at goal.

What stood out, apart from using the conditions to their fullest, was Stratford’s teamwork.

Each player pulled their weight, with Jack Bacon throwing off players despite his shoulder injury, and Tim Hawkins very solid in half-forward feeding the ball to the goal kickers. Match review from article written by Alex Ford reporting for the Gippsland Times and contains excerpts from article published by the Bairnsdale Advertiser. 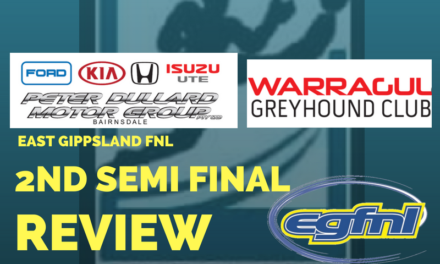