Fresh off pushing the ladder leaders Dandenong Stingrays last week, Eastern Ranges decided to rest some of their players – and give VFLW opportunities to others – taking on the much younger, and winless, Gippsland Power. In what was a scrappy affair, the Ranges kicked the first goal within 46 seconds as debutant Haylee Brebner kicked truly. They would not kick another until the final three minutes of the second term – to Charli Granville – as the Ranges took a seven-point lead into half-time.

Gippsland’s only goalkicker from the game – Ash Centra – was not sighted after half-time, making life difficult for the Power without the dynamic midfielder/forward, as the Ranges slotted 3.4 to 0.2, and came away with the 5.6 (36) to 1.3 (9) win.

Gippsland had an even spread across the team with Centra having a good first half of nine touches and a goal, whilst Amber Schutte and Alisha Molesworth both finished with match-highs of 21 disposals. Molesworth also laid a ridiculous 18 tackles in the wet, with Schutte laying seven and having four inside 50s. Sunday Brisbane (21 disposals, three marks, two tackles and three rebound 50s) and Jemma Birss (20 disposals, two marks and seven tackles) both worked hard, whilst Yasmin Duursma (13 disposals, two marks and seven tackles) showed her class at times.

The left-footer had some eye-catching moments in challenging conditions, standing up in a tackle to cleanly get the handball away, and remained clean through the contest. Though many were unable to deal with the conditions, Duursma was able to win the ball at ground level and try and take the game on, and had equal measures of offensive and defensive traits.

Molesworth had a big defensive day out. She broke the record for tackles in the NAB League Girls and was able to win plenty of the ball because of her defensive pressure. Laying 18 tackles against Eastern in wet conditions, the hard-nosed midfielder/forward thrived and was often found behind the ball. She picked up a personal NAB League Girls career high of 21 touches – previous best 15 – and worked hard to get the ball defensively. Like many of the players on the field, clean disposal was a tough task, and did not quite capitalise when going forward with ball-in-hand, but continued to have a crack.

Often found herself under pressure in the back half, and seemed to use it fairly consistently. She came off half-back on a number of occasions and took some a couple of intercept marks as well. She was one of Gippsland’s best players across the four quarters, and also laid seven tackles to go with her 20 touches. She particularly became prominent through the middle two quarters as she stood up against the Eastern attack.

Unfortunately the talented 16-year-old only played the first half before coming off and not returning. Donning the long sleeves in the wet weather, Centra certainly made an impact in that first half, kicking a great goal off a step 11 minutes into the first term, becoming Gippsland’s only goalkicker. Centra continued to have a crack throughout the match in the first half, with the tall midfielder/forward looking calm with ball-in-hand and a clear standout considering the considerations.

Another player who really bought in to the conditions and stood up, Schutte was one of the more prominent players in the forward half, sending the ball inside 50 on a number of occasion. She laid some fierce tackles throughout the game to tally up seven for the match, and late in the fourth term had a cleve moment where she handballed to herself, then recovered and had a shot towards goal that missed to the right. 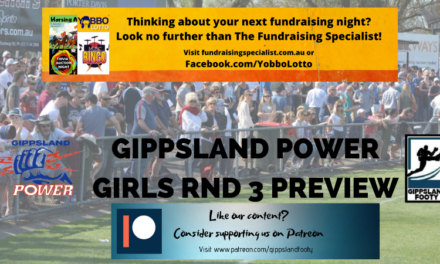