The Tigers had momentum in the first term and the two teams finished on a three-point margin after the first quarter but Lang Lang ceded control of the game in the second quarter.

The Lyrebirds had kicked four goals eight by the main break while the Tigers still sat on three goals and three points.

The main break saw the two teams split by 11 points – a perfectly achievable margin to make up by for Lang Lang.

But the Lyrebirds wanted the win more and came out of the blocks firing in the third term. The home side extended the margins by 23 points by the end of the quarter, adding three majors and one behind to their tally. The Tigers meanwhile had added just one more major and a behind, bringing their scoreline to 4.4-28.

If they wanted a victory, the Tigers had some catching up to do. In the final term the Lyrebirds kicked another major and a behind, one goal less than the visitors who did their best to get back in front, booting two goals two and finishing the day on 6.6-42. But it was not enough to overcome their hosts.

Buln Buln finished the day on 8.10-58, 16 points in front of their visitors thanks to a that solid third term. Matthew Gray was best on ground for the victors.

BEST PLAYERS AND GOAL KICKERS UNAVAILABLE AT TIME OF POST

The match-up between Ellinbank and Neerim Neerim South saw the closest game of the round, with the Eagles going down by just one point at Neerim South on Saturday. The final scoreline was almost dead equal – 8.9-57 to 8.8-56.

Neerim Neerim South came firing out of the gates in the first term. The Cats kicked four goals five in that opening quarter while the Eagles kicked half that score – two majors and one behind for the quarter. But it was the Eagles’ turn to fly in the second term.

Ellinbank more than made up for their first term deficit by kicking four goals three before the main break, all the while keeping their hosts to just two behinds.

The first half finished with the Eagles in front – 4.7-31 to 6.4-40. The third term saw more of that Ellinbank dominance, with the Eagles putting a big four goals two on the scoreboard.

In response, the Neerim Neerim South forwards found the main target three times, bring their scoreline to 7.7-49 as they entered the final term. The Eagles sat on 8.6-54.

An eventful final term saw a hard-defensive effort from both sides. The Eagles did not kick a major in the fourth quarter but added two behinds to their tally.

Neerim Neerim South got lucky with two majors, bringing their fulltime tally to 8.9-57. The Eagles just missed out on the win, finishing the day on 8.85-56.

In a result that was somewhat expected, bottom side Nilma Darnum went down to second-placed Longwarry at Nilma Darnum on Saturday.

The Crows more than accounted for the Bombers, winning by 104 points. It was clear from the outset that although the ground was Nilma Darnum’s, the game belonged to Longwarry.

The Crows kicked four goals three in the first term, opening up a 19-point margin and outpacing the Bombers who had kicked one goal and two behinds in that time.

Longwarry continued to play their own game, albeit with questionable accuracy, and they added three goals seven to their tally. Nilma Darnum could not keep pace with the Crows, adding just one more major and a behind to their tally before halftime.

And after the main break, the Bomber again could not match Longwarry’s rate of scoring. The Crows put one behind on the scoreboard in the third term, bringing their scoreline to 2.4-16. Longwarry on the other hand more than double their tally and decided to use the match as a percentage building opportunity.

The Crows kicked eight goals one in the third term, breaking through the 100-point mark and bringing their tally to 15.11-101 before the final quarter. That meant Nilma Darnum had an impossible 85 points to make up if they wanted a positive end to the day.

Nilma Darnum did indeed step up their work rate in the final term and almost doubled their tally. The Bombers kicked an additional 18 points – three majors – to bring their final tally to 5.4-34, but it was not enough to draw remotely near Longwarry, who finished the day on 21.12-138.

Peaking at the right time of the year, Nyora’s form is highlighted by Ben Schultz who snagged an impressive seven majors against Catani. Coming into the game unsure of his injured foot, Dylan Heylen blew all doubts away as he stepped onto the ground on Saturday. Jesse Heylen combined with Brad Arnold to ignite the mid-field. With poise, the local onballers used the ball with care and precision. In opposition, Catani’s main presence was Paul Pattison. However, he struggled against Nyora’s united front.

Nyora came into the game for the first time this year without any changes, removing midseason injury woes, the team fought well. Sam Burns played well again, working to wards one of his best seasons at the club. With his cousin Tim sharing the wings, short passes out were often directed to either of the Burns. Nyora midfielders worked well with the outside players, connecting with one -two handballs, their decision making was impressive as the options opened out.

Targets were being hit, Nyora was in search of, but not reliant on Schultz.

The movement of Aiden Cumberland taking up the small forward role balanced out the Nyora attacking 50.

Chris Hodges played one of his best games for the year, coming from half-back, swapping to the wing and on the ball, his pace put most a step behind.

A high-powered Poowong attack travelled to Yarragon and blew the home side apart on Saturday, giving the Magpies a huge win. The Magpies had nine separate goalkickers, with five scoring multiples, in their huge 121-point win.

Poowong’s pressure on the ball and timely contest work defensively held the home team scoreless for the entire quarter. This led to a 21-0 quarter-time lead. James Doria, who booted six majors for the game, was dominant in the second term, presenting well and finishing in front of goal. This rubbed off on the other forwards and made for a strong quarter for the Magpies in which they lengthened their lead to 36 points by half-time. This trend continued in the third quarter, the home team again held scoreless for an entire term, unable to overcome the intensity the Magpies were bringing to the contest. More goalkickers got on the board for the away side to accompany Doria’s dominance, with Hazendonk, Wallis, Newcombe chipping in. The team piled on an impressive seven goals three to lead a stunned Yarragon 94-13 at the final break.

Yarragon managed to put one on the board into the last term but that was it, with a Poowong side full of confidence running riot. The Magpies booted seven more goals in the term, coming away 141-20 winners. 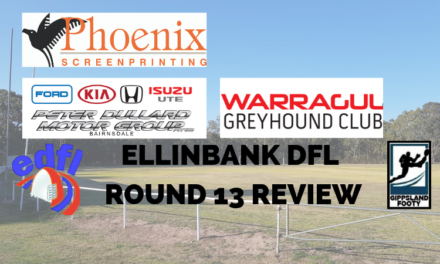