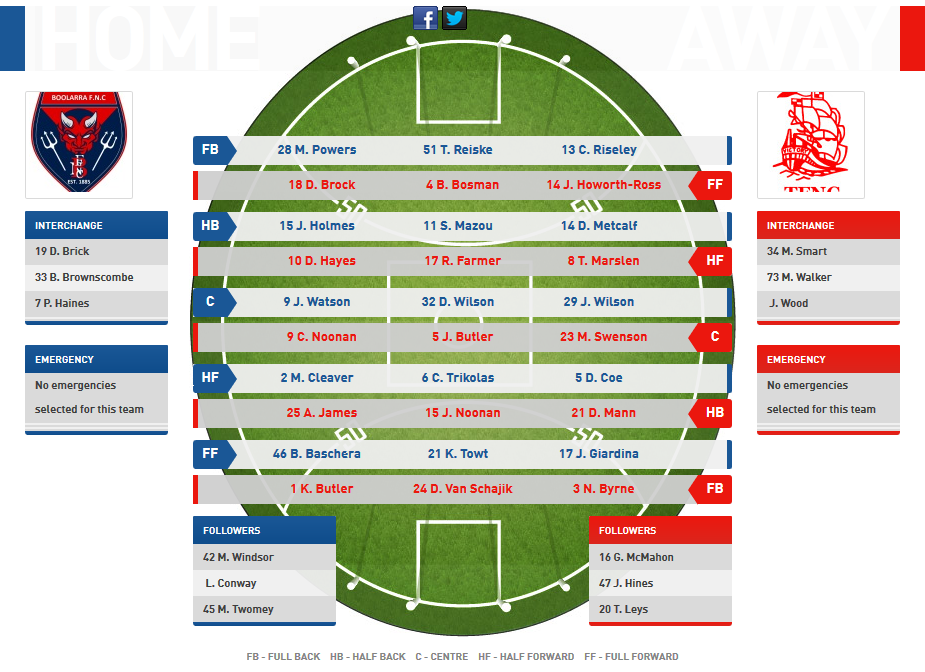 The latest weather for boolarra

Boolarra managed to back up their round one win over Thorpdale, with a really solid first quarter in their Anzac Day clash against Morwell East, but from there it fell away quite dramatically for the Demons.

The Hawks exposed Boolarra for run, both with and without the ball.

That said, the efforts of Boolarra for the first thirty minutes was better than average and that sort of effort over a longer period will not only keep them in games longer, it is likely to give them more opportunities to be in a position where more games can actually be won.

It is unlikely to be this weekend however, as they front a Trafalgar side that appears to have got it premiership style mojo back.

There was a feeling of resentment from the Bloods towards Thorpdale last week, whe, their offer to assist the Blues with numbers to insure a reserves game was declined, meaning there would be no game of footy for their second twenty players.

That disappointment translated to a performance from Trafalgar that we hadn’t witnessed thus far in 2019, it was a style of play similar to that of their premiership year of the season prior.

Bloods coach Clint Eisendel “I was extremely impressed with our contested footy in the air and on the ground, our ball movement was much better and we really connected well with our forwards”

From the sidelines, the reigning premiers spread well, were composed with the ball, looked organised and had obviously added some “bite” around the contested footy on the ground, only their finishing in front of goal let them down.

Boolarra’s home ground can be tricky to contend with, especially if their had been rain about, but it wont be so tricky that Trafalgar won’t cruise through to another victory, making it two in a row. 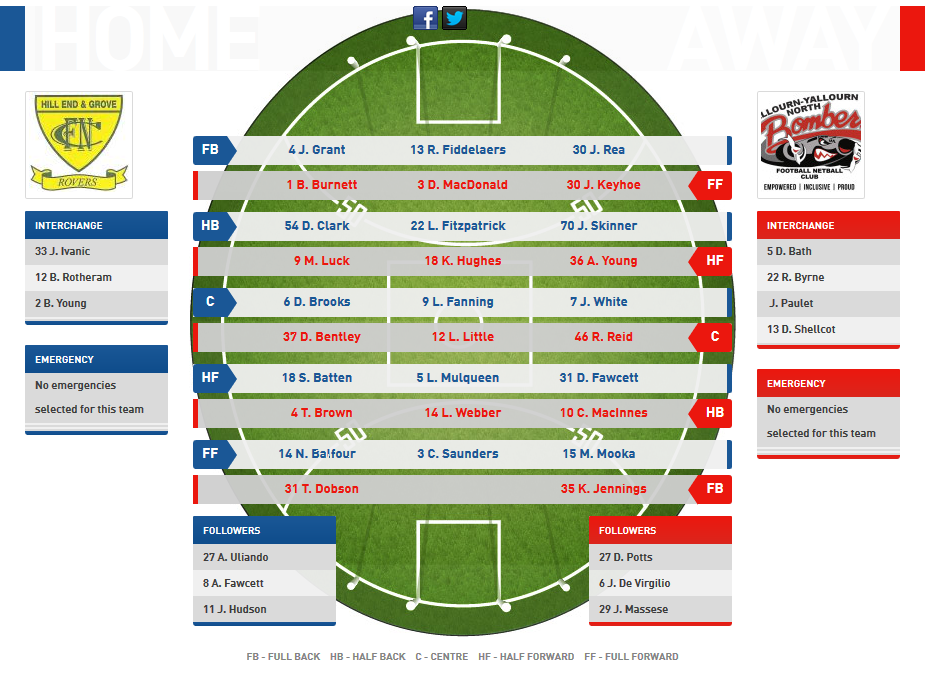 If Hill End are to be a finals contender in 2019, it will need to make its home ground a fortress against all comers, and that includes this weeks opponents in Yallourn-Yallourn North.

The Rovers made a statement against the reigning premiers, Trafalgar on their home deck just a few weeks ago, that declared them as an improved team, but will that improvement translate to a finals berth by seasons end?

The Bombers are yet to be “really” tested in their two matches to date, and the fact is they will be turning up to Hill End with an expectation to win, and maybe that’s where the Rovers can gain a small advantage, by jumping out of the blocks early in the match.

There are not too many weak links in this visiting side and there is already evidence of them being able to turn a game on its head in a ten minute period, as they did last week against Yinnar, so the effort from the home side will need to be there from the first bounce to the last siren.

Hill End showed in patches against Morwell East in round 1 and even last week in their clash with Mirboo North, that are capable of mixing with the best, but to actually beat the best it cannot rely on just “patches of play” they need to be genuine for four full quarters.

Hill End might not have the same depth of talent as their opponents, but they do have plenty of talent, and it will need to be at its best, not only this weekend, but for most of the year to claw their way further up the ladder.

Yallourn-Yallourn North, wont be bullied, and are unlikely to panic even if they find themselves trailing at any stage of the match, they have the depth in talent and in experience to find a way to win, and that what you would expecting them to be doing again this week. Thorpdale return home with their tail between their legs this week, after been given an old fashioned touch up by Trafalgar in their Anzac Day clash less than a week earlier.

Things didn’t go as planned for the Blues when they failed to have the numbers to field a reserves side against the Bloods and the fact is things didn’t get any better when the senior game started either.

Thorpdale have managed to put on a brave face in the opening rounds despite many pressures both on and off the field, but those pressures are unlikely improve for at least another couple of weeks when more players make themselves available on a regular basis.

Coach Ray Pickering is doing all he can to get the best he can from what he has, but his side remains a little way from threatening the finals as they have done in recent seasons.

This weeks opponent, Mirboo North, have taken all before them in the early rounds and the expectation is that will do the same this week, even away from home.

The Tigers may have even surprised themselves with their current top of the table position on the ladder, traditionally slow starters to the season, it appears that this year they are likely to have five wins beside their name after five rounds, and even with their coach on the sidelines and some significant outs to their line up of 2018, they have the depth of talent to be a real contender when it counts.

One of the most pleasing aspects for the Tigers is the hard work of a pre-season being translated into on field performance in the season proper.

In the build up to 2019, the Tiger squad were given a program that has them with plenty of kilometres in their legs and that has already paid dividends in some early season victories, none more impressive than against Yinnar a fortnight ago, but you get the feeling that may have been one of many fine performances you can expect from Mirboo North this year. 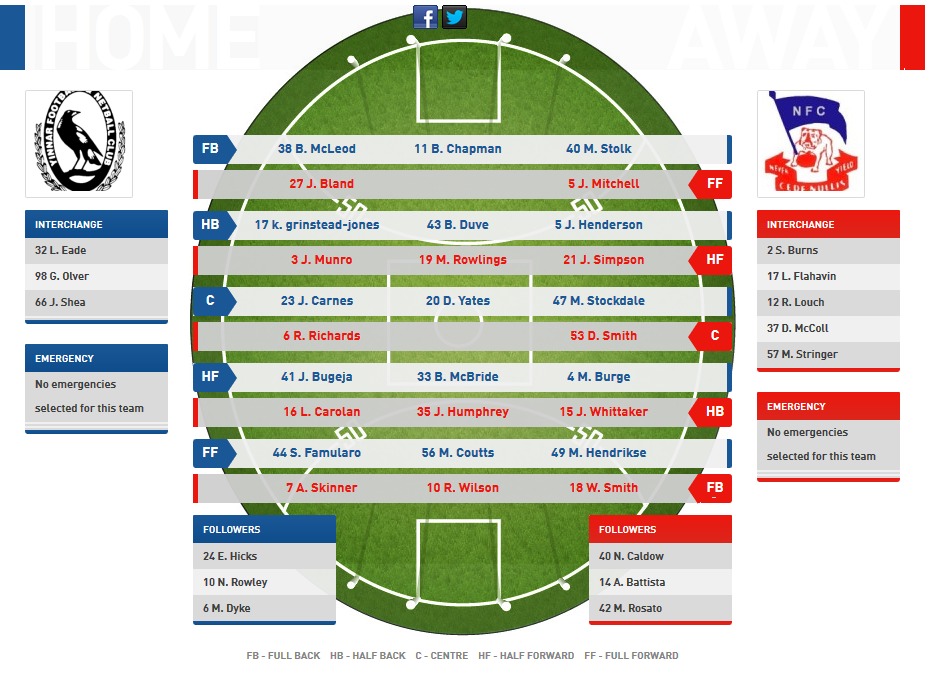 Yinnar have the chance to redeem themselves in front of a home crowd, after embarrassing performance at the same location just a few weeks ago.

It was on the day of the clubs season Launch that the Magpies dished about one of their more ordinary showings in recent memory, defeated by Mirboo North by over twenty goals!

Yinnar were forced to sit on that humiliating effort for a couple of weeks over the Easter Break, only to then be confronted by a talented Yallourn-Yallourn North side that inflicted yet another defeat on them.

However, to their defence, the Magpies were very competitive against the Bombers for all but a ten to fifteen minute period in the second quarter when they couldn’t stop the flow of seven goals that turned the match on its head.

This week will be a different proposition when they meet a club that itself is in the early stages of a rebuild and wont offer the push back of those further up the MGFL ladder.

The Bulldogs have got, some experience, they have some young talent, but not enough of either at this stage to match with the better sides.

For Yinnar, it will be an opportunity to add more minutes into its newly formed line up that still consists of plenty of new faces whilst also securing the very important four premiership points, on the other hand, for Newborough it will be another lesson learnt in what might be required to take their game to another level up.

These two clubs are at different stages of their journey, but both have the same strong values and pride in playing for their jumper and while they both have that they are destined to get their opportunities moving forward.