Paul Carter is known among footballers across Gippsland for engaging in some friendly banter out in the middle.
When he cops a spray from a player, his signature reply is; “Why don’t you take up umpiring – you can’t play footy for sh**!”
“I have a few little sayings. The players who know me know that I’ll give a bit back. We have a beer afterwards and it’s all good.”
Carter has been doing it for 500 games now.
His milestone match was at Stony Creek on Saturday when the Lions hosted Toora.
He took up the whistle as a boundary umpire on Alistair Hillis’ advice.
He’d played a couple of years of junior footy for Leongatha and his teammates back then would recall his uncanny knack to kick freakish goals. A mad Magpie fan, he had tricks like Daicos.
After a couple of years running the boundary, he took up field umpiring, before resuming his playing career with Fish Creek and MDU in the reserves.
He’s the first to admit he wasn’t a superstar and was happy to return to umpiring in the late 90s.
He umpired alongside Leongatha’s Matt Stevic who chalked up his 300th AFL game at the weekend.
Carter’s one of the best in the business locally though.
He’s umpired 11 senior grand finals – nine Alberton, one Gippsland and one West Gippsland.

(There is more content at the source of the original article. See below for details) 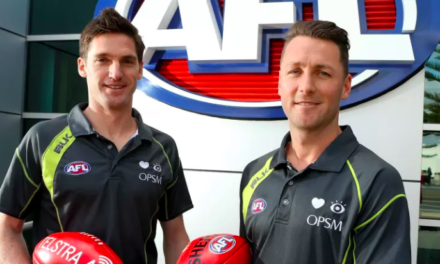