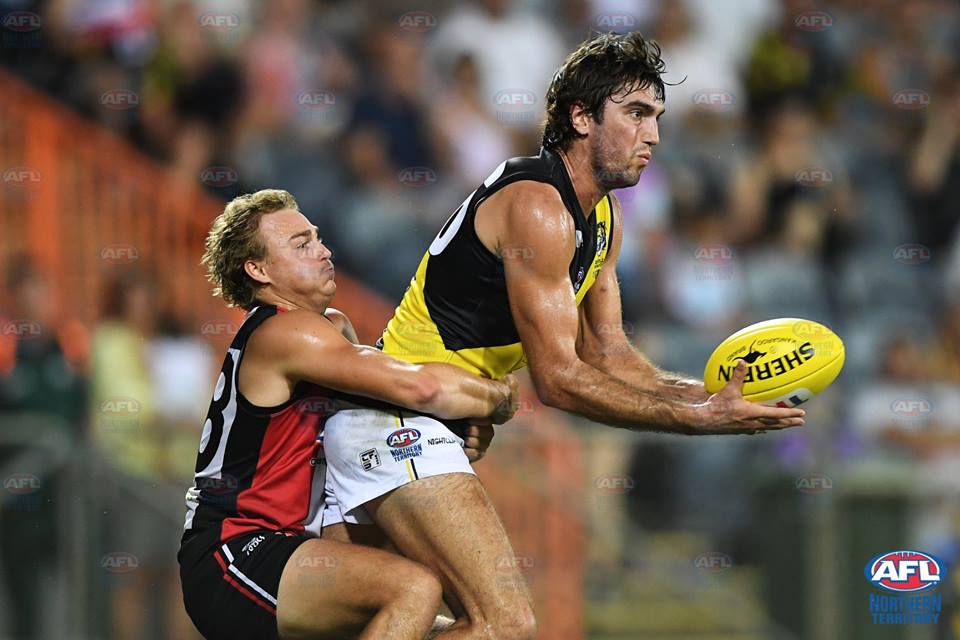 In a defensively minded first half which opened up after half time, Gippsland had representation over the entire ground, with Simon Deery solid in defense, Danny Butcher active in the midfield and John Butcher a focal point at full forward. 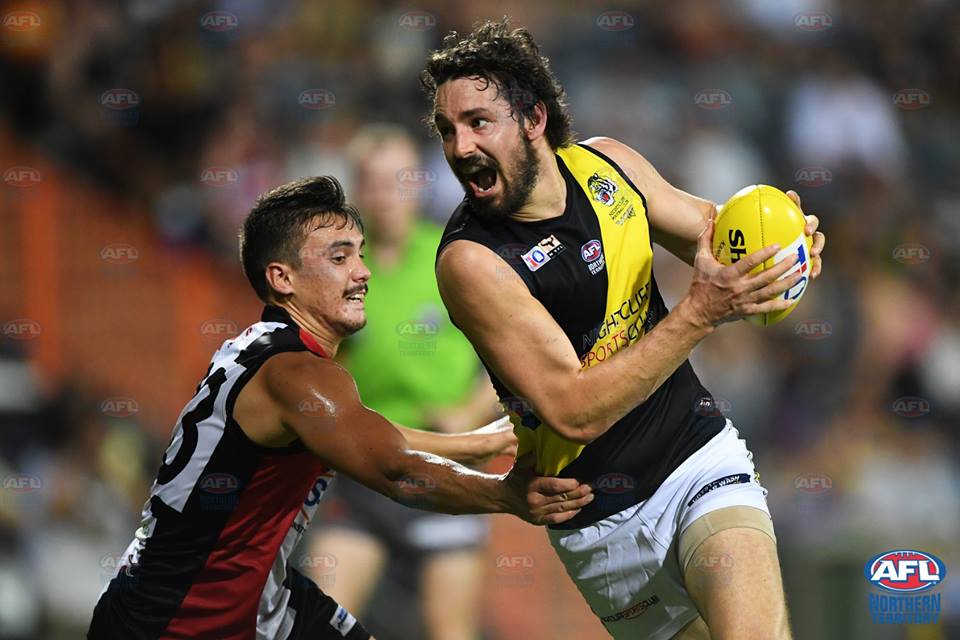 Deery and Danny Butcher were named amongst the best for Nightcliff, while John Butcher snagged one goal. For a full game review, see below:

NIGHTCLIFF has broken a 54-year premiership drought following its 22-point win over Southern Districts yesterday. Both sides had only won three flags in their Northern Territory Football League (NTFL) Men’s Premier League histories, but unlike their reigning premier opponents, Nightcliff had not held the cup aloft since the 1958/59 season. Youngster, Liam Holt-Fitz won the TIO Chaney medal for best on ground in the decider, which saw the Tigers salute, 8.13 (61) to the Crocs’ 5.9 (39).

Both sides had been praised for their relentless attack throughout the season, and as their last matches prior to the grand final showed – a combined 210-point winning margin – they are more than capable of putting the foot down in matches. But the first term was more of a dogged affair as Cameron Ilett pounced on a loose ball from a stoppage early to get Nightcliff on the board, before Michael Mummery levelled the scores in the last minute of the term for both teams to sit at 1.3 apiece.

As if a sense of deja vu, Ilett took just 20 seconds to get on the board in the second term and hand the Tigers a huge morale boost early in the quarter. A few minutes later, Rory O’Brien had a huge roost to level the scores, but a great defensive effort by Tigers’ defender, Clayton Holmes on the line saw him get a hand to it and rush it through. A couple of minutes later however, Jesse Koopman – fresh off a six-goal haul in the preliminary final – slotted a major from the most difficult of angles on the boundary line.

Hugo Drogemuller was having an impact on the contest for Nightcliff, while league best and fairest, Phillip Wills was influential through the middle. Jonathan Perris and Matthew Bricknell combined in the tenth minute of the term with Bricknell providing a contest and bringing the ball to ground for Perris to paddle it between his legs back to Bricknell who snapped truly off a step. An opportunistic Holt-Fitz then gave the Tigers the breathing room they needed, receiving the handball running inside 50 and putting on the afterburners for a terrific running goal at top speed.

The pressure was starting to get to the reigning premiers as a comedy of errors saw Steven Stewart completely mis-kick in defence and send it miles out of bounds, only for the Crocs defender to find out the Tigers had a free for holding the man against Michael Bowden. Luckily for the Crocs, Holt-Fitz missed what would usually be a regulation snap for the youngster, hooking it too sharply from 15m out and missing to the right. Nightcliff continued to pepper the goals but missed a few chances. Former Brisbane player, Jared Brennan had a chance for the Crocs with a snap from the boundary but missed.

Even in the dying seconds, the Tigers continued to press, with Danny Butcher putting it to John Butcher‘s best advantage inside 50, but good work from the Crocs’ defenders saw it spoiled, only for Nightcliff to force another turnover with a holding the ball call in favour of Danny who had worked his way across the ground to impact the next contest on the siren. His shot was an awkward torpedo which fell well short of goal and ended the half with the Tigers leading by 14 points.

Former Sydney and Western Bulldogs now Southern Districts player, Ed Barlow had the first meaningful shot of the second half with a long-range bomb from 50m but it just drifted to the right and was punched over the line. O’Brien also missed a golden opportunity from 40m, drifting to the right and reducing the margin to just two straight kicks. Nightcliff had its own rued chances in front of goal however, as Wills was somehow left all alone inside 50, took a couple of steps but missed to the left in a chance that could have seen the margin stretch to 18.

Wills made sure not to make the same mistake twice, taking advantage of a one-on-one contest and perfectly weighted kick from Danny Butcher to get out the back and kick a dribbling ball home for his first major of the contest. The goal had doubled the margin, which now stood at 19 points in the seventeenth minute of the third quarter. The metaphorical nail in the coffin came one minute later when a series of handballs inside 50 saw the Croc defenders worried about recipient Holt-Fitz getting away, catching him high. As Holt-Fitz got up to receive the ball, Stewart knocked him down,  with the teenager making sure the umpire saw it, earning a 50m penalty. While the Crocs defenders let Holt-Fitz know what they thought of his core strength, the young star pumped it through the goals from the spot for his second, and a 25-point lead.

In the dying minutes of the quarter, O’Brien gave the Crocs a sniff with a huge tackle 30m out from goal and subsequent free kick which resulted in the six points, and a 19-point deficit. Holt-Fitz continued to create headaches up the other end as he ran onto a loose ball and tried to kick it off the ground, but the pressure from Zac Smith was enough to rush the teenager into missing the attempt.  But Holt-Fitz could not keep away from the action even if he tried, with the next kick out falling into the lap of Bricknell who snapped the ball into the hole where Holt-Fitz marked, and despite cleverly trying to drop the ball for another free, but he also missed that chance when it cannoned into the post on the siren. The Tigers headed into the final break with a 21-point lead.

Nightcliff’s habit of immediate pressure from the first bounce again paid off, with John Butcher marginally missing out on Ilett’s 20-second goal record the previous term, soccering through a goal in just 25 seconds to give the Tigers a 27-point advantage and the yellow and black army was really starting to believe the premiership drought was over. If they believed by that stage, then the tears would have been flowing when grand final inclusion, Blake Grewar slotted the middle from a long-range set shot in the third minute and the margin stood at what was an unassaible 33-point lead.

O’Brien tried to conjuer something out of nothing for the Crocs down the other end a few minutes later but it was rushed across the line. The defensive pressure and hunger of the Tigers continued right throughout the game as Nightcliff’s Shaun Wilson pinged Josiah Farrer and earned a free kick as the Crocs charged towards goal. Koopman lined up for a huge goal outside 50 shortly after but it was stopped on the line and despite Brennan’s best efforts, the excitement machine gave away a free to Simon Deery on the last line. Brennan also missed another opportunity, as if every Southern Districts behind was a dagger to the heart for the 2017/18 premiers.

While Mummery and Shane Thorne both added goals in the last 10 minutes, it was ultimately just consolation majors as the Crocs went down to the fierce tackling and forward pressure of the Tigers, 8.13 (61) to 5.9 (39). Holt-Fitz was rightly given best on ground for his two goals and multiple other opportuities inside the forward 50, but he was far from alone on the night with a number of Tigers standing out. Among the best were Deery, Illett, Wills, Danny Butcher and Bricknell who all had some sort of impact on the contest for the night. For the Crocs, Dean Staunton was named their best for a four quarter effort, while O’Brien, full-back Sebastion Guilhaus and Sean Martin all played well. State league wrap – How did the Gippsland players perform? VFL Round 19 wrap – How did the Gippsland players peform? VFL Round 15 wrap – How did the Gippsland players perform?