Sandringham Dragons have bounced back from two disappointing losses in a row by registering their highest ever NAB League Girls score, pushing Gippsland Power aside by 99 points in a dominant performance. The final scoreline read 2.3 (15) to 18.6 (114) as the Dragons seemed in control from the start.

Despite the loss, Gippsland still had some admirable contributors. 2006-born star Ash Centra was unsurprisingly amongst them, managing one of Gippsland’s two goals and directly assisting for the other in an outing which yielded 18 disposals, five marks and six tackles. Macie Gilmour was once again strong through the midfield with 16 disposals and a whopping 14 tackles, while Amber Schutte was also causing headaches with her 13 disposals and five tackles.

Despite the loss through the midfield, Gilmour was a consistent road block from congestion for her Sandringham opponents, chasing relentlessly after any opponent that won the ball and applying great tackling pressure throughout the match, with 14 tackles an impressive haul for the game. Gilmour wasn’t just defence around the contest, with the occasions she managed to win the ball in space or from a pack generally resulting in a long kick forward to try and create something for her side.

It’s no surprise to see the 2006-born talent mentioned as one of the bests in any game she plays, but it felt like she stepped up against the Dragons. Centra’s work in the forward half was consistently exciting, with her strength in the air too difficult for Sandringham to shut down as she pulled in mark after mark, whether it was from a well timed lead to take it uncontested, or flying across a pack to hold a contested mark, there wasn’t an answer for what Centra was doing. Centra managed to secure Gippsland’s first major of the game where she stepped around an opponent on the lead to take it on the chest and put it through easily, but her direct goal assist for Gippsland’s second was arguably more impressive, as she controlled the ground ball well and fired out a darting handball to an oncoming teammate whilst being tackled. Centra has been spending an increasing amount of time in the midfield each week, but took on a new role against Sandringham as a relieving ruck at times, competing well in the hitouts but impressing most with her follow up work at ground level and ability to get from contest-to-contest. 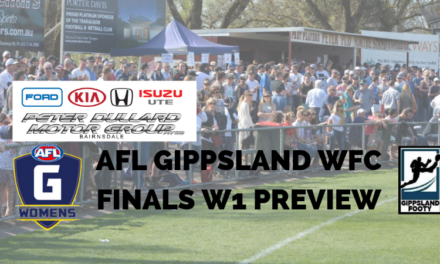 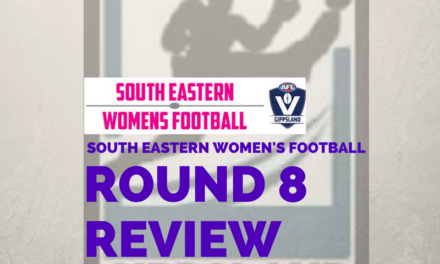