Matt Gray’s coaching tenure finished with a victory as Buln Buln comfortably accounted for Lang Lang to achieve another mid-table finish.
The Tigers had threatened to continue the theme of upsets, kicking out to a 19-point lead at the first change.
A scoreless second term brought the Lyrebirds back into the game, quickly turning the deficit around to lead by 10-points at the long break.
The Tigers were still in touch at the final change, but another scoreless quarter in the final term sealed their fate as they went down 11-8 (74) to 5-5 (35).
Simon Dawson, Matthew Pearson, Bryce Monahan (four goals), Jake Herbel, Thomas Axfovd and Charlie Park helped the Lyrebirds take control.
Clint Fulton, Ben Barwick, William McGindle and Stuart Casey helped the Tigers make a strong start.
Warragul & Drouin Gazette

Ellinbank supporters would no doubt be left with a feeling of what could have been after the senior team finished the Ellinbank District Football league season with a lighting two-point win over second-placed Longwarry. The 9-9 (63) to 9-7 (61) result ensured the top two teams would enter the finals series with a loss.
The Crows, who used the dead rubber to blood talented youngster Bailey Stephens, were no doubt down on output but that was taking nothing away from a determined Ellinbank side that fought hard for victory. The Eagles, whose season was ravaged by injury at costly stages through the middle part, will no doubt use the result to spark them into action for next season.
With a strong wind favouring the Warragul-Korumburra Rd end of the ground, there was little between the sides as they headed for the sheds locked at 5-4 apiece. The Eagles utilised the advantage in the third term, kicking three goals to kick 20 points clear at the final change.
Such was the strength of the wind a booming kick from Longwarry coach Daniel Fry looked set to carry from centre half forward, only for the ball to change course and begin coming back. Longwarry entered the final term with the advantage and not without their chances if they could get their game up and going. An impressive baulk from Russell Lehman failed to materialise into a score and Ellinbank’s ability to keep the ball locked in its half for much of the first stages of the quarter would prove instrumental in holding on for victory.
The Crows had been doing their best to move the ball quickly but the Eagles defenders were able to set up well. When Cole Cook run into an open goal to get the Crows going, eight minutes had already elapsed. Ellinbank coach Ben Wragg took a telling flying mark to deny the Crows in a further demonstration of fight shown by the Eagles. With the wind a significant advantage the Crows would keep on coming. They were assisted by a 50 metre penalty but failed to take full advantage, with the shot missing. A Crows goal followed soon after, but Ellinbank found the immediate response against the run of play to go a step closer to pinching the four points.
Not to be denied, a snap on goal was quickly followed by another as the Crows reduced the margin to just two points to set up a tense finish as the match headed into time on. It set up a fitting lead in to the finals as the crowd, a few seemingly well plied with alcohol, really started to find voice and get into the game.
It would be Ellinbank who would have the composure in the dying stages. Alfforded an opportunity to play keepings off at the 24-minute mark, the Eagles played the percentages to go down the line and force the ball out of bounds as the siren sounded soon after to mark one of the best wins of the year for the home side.
Ruck Ben Cuckson, Jake Delphine, Kane Oldham, Russell Lehman, Cook and Brody Rundell had been key players in the Crows’ push for victory.
For the Eagles, it had been Mark Vassett, Tom Johnson (three goals), Ash Wallace, Michael Urie, Ben Wragg and Shaun Phelan fighting to finish the season on a high.
Warragul & Drouin Gazette

Catani ensured it would enter the finals in winning form, comfortably accounting for Neerim-Neerim South 14-10 (94) to 5-2 (32).

The Blues kicked out to an early 27-point lead as the Cats failed to score in the first term.

While the Cats tightened in competitive second and third quarters, the floodgates opened in the final term as the Blues finished with seven goals to two.

Poowong travelled to Nyora and knocked off the top team in the last game before the finals.
Poowong were without Alex Doria while Nyora was missing Dylan Heylen. Also at stake was the Demon Cup which has remained mostly with Nyora over the last four and half years.
Poowong kicked to the speedway end with a two or three goal breeze and kicked the first goal after Thomas Wyatt’s pass found Trevor Hooker. Nyora bounced back with a free kick for a high tackle which resulted in a valuable goal against the breeze. A great pick up by Ben Hancock on the forward flank resulted in a brilliant goal. Poowong wasted a few opportunities with the wind before James Doria picked up and kicked straight for Poowong’s third goal. When the siren went for quarter time Poowong led by 15 points 3.3.21 to Nyora 1.0.6.
Ben Hancock showed his skills and defied the breeze with two great goals and stretched the lead to 27 points. Nyora lifted and attacked through Ben Schultz who received a free kick and a 50-metre penalty after an incident off the ball leading to Nyora’s second goal. Schultz then marked and goaled. An incident resulted in Nyora’s coach F‘ia Tootoo being benched for 15 minutes and this created some reaction from the good crowd. Nyora continued to press and another mark to Schultz resulted in their fourth goal. Poowong held a seven-point lead at half time and would need a good third quarter to get a break as Nyora would have the breeze in the last quarter.
Jai Newcombe was playing well down back shutting out Ilan Osman. Josh Chivaroli was keeping Nyora’s Spooner under control. Jayden Sullivan and Chris Robinson were playing well and Ben Hancock and Trevor Hooker were creating opportunities down forward. Poowong moved Tim Hancock on to Schultz and restricted the big forward.
At the other end, a great kick to the advantage of Trevor Hooker resulted in his second. A great intercept mark by Chris Robinson resulted in Poowong's seventh goal. Jake Cochrane received a free for a marking infringement and further extended the lead to 25 points at the last change.
Some pressure was lifted when Ben Hancock rolled through a goal, but Nyora’s coach Tootoo replied immediately. Both defences were working hard but a mark to Thomas Wyatt in front just made it through the big sticks for a 31 point lead. Nyora lifted and added a goal when a Poowong player encroached on the mark resulting in a 50-metre penalty and then Nyora received a free kick for a deliberate out of bounds resulting in Nyora’s seventh goal. Poowong held firm from there though and when the siren sounded were 20 point winners 10.8.68 to Nyora’s 7.6.48.
Poowong players, coaching staff and supporters celebrated winning back the Demon Cup and defeating the top side. The rooms were full and the song was sung with gusto. It was a great effort by all to win 11 of the last 14 games after losing the first four.
South Gippsland Sentinel Times

Entering its match against Warragul Industrials with nothing to lose, Nilma-Damum descended on Western Park h0ping for a big scalp in their efforts to create some momentum heading into the 2019 Ellinbank District Football League season.
Having acknowledged the need to improve in several areas following a challenging season resulting in just four wins, Bombers coach Matt Shorey would have relished the opportunity to measure where his side was at in a clash against finals bound Warragul Industrials. While the Industrials were clearly experimenting somewhat with their place in the top three assured, the Bombers were competitive for the most part and were far from disgraced in going down, 12-10 (82)~t0 8-3 (51).
While no doubt disappointed to not take the big scalp they had been craving, the result gives the Bombers something to build on for next season. Josh Peterson started forward for the Industrials and was quick to make an impact, sharing the ball with Mitch Davies to set up a goal assisted by a 50 metre penalty for an infringement in the marking contest. Shane Brewster and Tyson Bale waxed, with Brewster this time the beneficiary of a 50 metre penalty for an encroachment of the mark Brent Simons found Mitchell Dance in space as the Bombers kept in touch through the first of his six majors for the afternoon. Tom Commadeur scrambled a goal despite being tackled in the goal square, much to the delight of the Industrials supporters, as the home team entered quarter time with a 14-point advantage.
The Bombers had been hanging in and the theme continued into the second quarter. It was quite some time before Will Jolley ran into the open goal to register the Industrials’ fourth. Will Gibson.,who was also enjoying predominantly playing forward, snuck in a set shot from centre half forward to put the Industrials 26 points up at the long break. The Bombers had been competitive, but just weren‘t able to show it on the scoreboard.
The competitive nature of the contest continued in the second half, the Industrials scoring seven goals to six while finding out a lot about their players' ability to play multiple positions in a valuable lesson ahead of the finals. With Peterson swung forward and proving equally as damaging with his left foot, Shane Ingham had ventured to defence and proved diligent, with a second quarter spoil put in the path of Tye Holland and setting the Industrials up for a goal. Brewster was rewarded for some good follow up work and finished with four goals.
Travis Ogden stepped up when afforded more opportunity, while Cooper Minichiello, Dylan Smith, Tyson Bale and Stephen Ballingall also set up opportunities.
Ben Campbell, Dance, Nicholas Murray. Nathan Campbell, Logan Deschepper and Dylan Cann led a competitive effort from the Bombers.
Warragul & Drouin Gazette 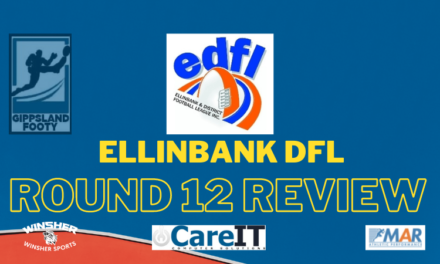