Fittingly, the great Fish Creek Football Netball Club, the organisation which has so dominated the competition for the past 65 years, won probably the last-ever Alberton league senior premiership on Saturday, making it three in-a-row; 2016, 2017 and 2018, its 20th in the modern era.
And they did so in dominant style, by almost nine goals, over a gallant Foster, on rain-affected ground at Meeniyan.
With the AFL Gippsland Commission bringing down its draft recommendations for the reshaping of football and netball in the region last Friday, it’s virtually certain now that Alberton will merge with Mid Gippsland next year, to form a new 15-club league to be known as the Central and Southern Gippsland Competition.
The Alberton FNL, formerly the Alberton Football Association, will be no more after 135 years.
However, while there was plenty of talk about those monumental changes on Saturday, it was the day’s celebration of country sport which still topped the bill starting out with a thrilling Under 13 netball clash between MDU and Foster in the rain at 9.30am, a heart-breaking loss by MDU in the Thirds Grand Final, a stirring and popular win by Toora and District in the B Grade netball grand final and lastly, Fish Creek’s triumph in the main game.
The Kangas simply had more pace, more forward options and more youthful exuberance than the experienced, willing Foster Tigers, although the match started out in promising enough fashion for the underdogs.
Foster had put in a sterling effort to overcome Stony Creek the week before, just to get to the grand final. And they looked up for the contest when Shaun Chaseling scored to quick-fire reply to Fish Creek’s first goal, off the boot of Roos’ youngster Ayden Wilson, mid-term.
But it was Fish Creek that went on with it in the crucial first quarter, with Tommy Cameron running wild before booting the team’s second, Jordan Shaw the third after running clear and Andrew Seccull picking up the crumbs from a decisive clearing punch by one of Foster’s best; back, front and on the ball, Luke Galle.
He could not have done more to swing the contest Foster’s way but the writing was already on the wall at quarter time, Fish Creek by 13 points on heavy ground.
When Fishy’s Jordan Shaw kicked the next goal, seconds after the restart, followed by another to the talented Andrew Seccull, it was ‘how far Fishy’.
Foster looked slow when Fish Creek was on the break in the early stages but a fine passage of play, launched by the Tigers’ Troy Van Dyke combining with Brad Rooney and ultimately finishing in a goal to Nathan Grylls started their best stint.
‘Buddha’ Grylls pumped his fist, shouting “come on” as he turned back towards the centre, in an effort to fire his team mates, and they responded.
The Tiger defenders held firm when Liam Adlington, Darcy Hargrave and Cameron came at them for the reply and when Brad Rooney got the ball to Tom McGowan who kicked superbly for a goal, the shouts of “come on Tiger Boys” could be heard with Foster seemingly back in the game by half time.
Shaun Chaseling had the chance soon after to get another that would have made it really interesting.
Fish Creek’s Ethan Park and Tom Cameron combined to get the ball into the scoring zone for the steadier but a close-in chance was squandered and they went to the break 19 points in front.
Ayden Wilson, Harrison Hunt and Bailey Harfield-Park were prominent in the play as the half time siren sounded and the Tiger fightback held no real fears for Roos’ fans.
The teams traded goals after the restart; first Hunt for Fishy then Galle for Foster but it was two goals from Seccull, the first long and low and the next after a pass from Harfield-Park that started to break the game open for Fish Creek.
In fact, in the run to the line, on a heavy ground, Fish Creek kicked eight goals to Foster’s three in the second half to put the game, and the ultimate prize, out of their opponents’ reach.
Fish Creek remained disciplined down the stretch with Wilson and Shaw prominent up forward, Tommy Cameron still going strong, Fish Creek’s big men including Manne and Adlington dominant and a fleet of inside and outside players including Ethan Park, Bailey Harfield-Park, Darcy Hargrave, Nick Oaten, Hunt, Macri, Cooper, Smith and others simply too good. 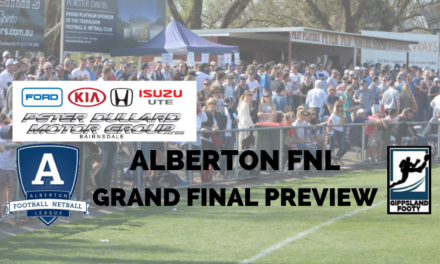