A great start out of the blocks helped ladder leaders Bass Coast Breakers to a comfortable 34-point win over Warragul.

The Breakers kicked four first quarter goals, making it hard for the Dusties to mount a comeback.

After the first break, Warragul upped their intensity, but struggled for meaningful movement up forward. A disciplined Bass Coast defense continued to rebound after numerous attacks, but themselves were finding it hard to capitalise on their forward movement.

After the main break, both sides had a few opportunities at goals. The home side broke through for their first major of the game through Jenna Robertson, but the visitors started to break the lines again, only to pepper away at the goals without registering any majors.

With a mountain to climb in the final stanza, Warragul once again struggled to connect with their forwards, while Bass Coast put the final nail in the coffin with Ella Cargill slotting her fourth goal.

While on paper it appears to be an easy victory to the Breakers, however the Dusties fought to the bitter end. The eventual winners had more polish across the board with more contributors. Chelsea Connell, Stacey Poke and Kelly O’Neill were dominant across the field. Sophie Bolding was on fire in the first half but faded late, while Grace Matser won numerous ruck contests and offered options.

Renee Young and Samara Beaton lead the charge for the Dusties and were well supported by Michaela Williams. Shanara Notman also showed moments of poise and skill, but there were moments where her side could have used two of her. 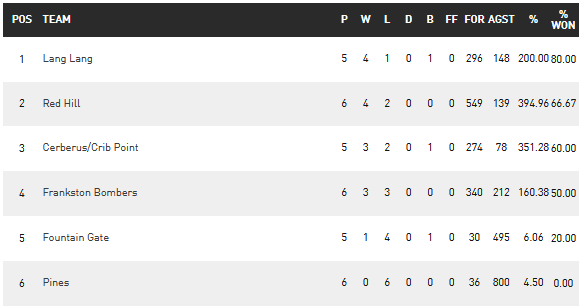