The Maroons held on to fifth spot on the Gippsland League senior ladder and are now level with Moe on nine wins for the season with just two games to play in the home and away season.

Coach Mark Collison reiterated his belief in his side after its 50-point win in the face of immense pressure.

“We were confident going in that our best footy was more than capable and I think when we committed and played our brand of footy that we were a really good side,” Collison said.

A loss and subsequent drop to sixth spot would have made finals a stretch for the Maroons but Collison said the side was now “settled” and “good enough to beat anyone on our day”.

“We’ve been really unsettled the last five weeks with the side changing constantly and we hadn’t had much opportunity to get a good look at our best side but we’ve managed that the last two weeks and I thought we put in a good performance,” he said.

“Haydn [Hector] was obviously our best player on the ground and he’s one of the highest credentialed players in the competition,” Collison said.

“So when you have three players of that quality in, it really helps the side.”

Dylan Loprese was the main culprit up forward and bagged four goals for Traralgon in the win while Lee Stockdale and Chris Urie kicked two each and singles went to six others.

Peter Ainsworth was the lead scorer for the Lions and finished with three goals and singles went to Harrison Sim, Ryan Farmer and Scott Van Dyk.

Collison said the side pulled up “really good” from Saturday’s clash with Moe and expected a fully fit outfit to take to the park against ladder leaders Maffra this weekend.

The Maroons will also have an eye on Moe and Warragul – both on nine wins – who come up against Wonthaggi and Sale respectively this weekend.

A relentless and impressive four quarter performance by  Warragul upset top of the table Maffra at Western Park on Saturday to keep the Gulls well in the hunt to grab a place in the final five.

It is the third year in a row that Warragul - as underdogs - had defeated Maffra at Western Park. The Gulls withstood everything Maffra could throw at them on Saturday, including four unanswered goals to get within eight points, 23 minutes into what became a 30 minute final term. There was no better example of the determination to not let slip a game they‘d controlled virtually all the way was Warragul‘s steadying goal at the 25-minute mark when Kim Drew, Nate Paredes and Brayden Fowler forced the ball from the wing with successive kicks off the ground to put it in front of Luke Di Ciero who soccered it through the goals from 25 metres. The goal ended Maffra’s fightback.

That was the bit of luck that sometimes makes the difference but Warragul was the better side for most of the game and thoroughly deserved to win. The Gulls created the late chances and Brayden Fowler capitalised with goals from a kick off the ground when Maffra full back James Huts dropped a chest mark on the goal line and converting after the siren from a mark. Fowler ended the game with five goals, a good return in conditions that were far from easy.

Why Maffra didn’t adopt a similar tactic with Warragul's Matt Rennie to what Warragul did with Pleming is something of a mystery. Rennie rarely had an opponent, was able to drift around taking intercept marks and gathering hurried kicks forward. He also was able to link up moving through the middle of the ground to help mount Warragul attacks.

The start to the game was, as expected, torrid. It was five minutes before the first score, a behind to the Eagles, but that was to be the only time they were in front all day. Kim Drew’s conversion from a courageous mark opened Warragul’s scoring and long goals by Fowler and Paredes and another by Michael Coombes after a high tackle had the Gulls leading 4-0 to 1-2 at quarter time.

With rain falling and the ball and surface slippery there were plenty of mistakes from both sides early in the second term and it took 15 minutes for the first goal, to Maffra’s Jaryd Clohesy, and when Kel Porter intercepted a kick in to add another the gap was down to four points. It was certainly a hard slog - Fowler got a steadier for Warragul but Bennett’s only goal for the game late in the quarter cut the Gulls' lead back to four points at the long break.

The game was up for grabs and it Warragul that grasped it. Four goals - from Fowler, Paredes and Luke DiCiero - to nil all in the third term saw the Gulls with what looked a match-winning lead at three quarter time.

But Maffra certainly wasn't going to lie down and even got within striking distance. Warragul passed the test, its defence that had been excellent all day, stood tall and the side lifted across the ground to finish out the last five minutes with three goals.

Warragul coach Steve Kidd was justifiably delighted in the dressing rooms after the match, especially with the way the players rebounded after a disappointing performance against Leongatha in the previous round that had ended a run of five wins.

The Gulls had five changes to the side - Tom Kelly back from VFL side Frankston, Dylan Proctor and Michael Coombes both returning from injury, Matthew Ross and Angus Emery a Saturday morning “in” after the late withdrawal of Tyssen Morrow. Proctor, who has had a season interrupted by injuries, was terrific whether boosting the defence or providing drive through the middle of the ground. But there were many others that were vital contributors.

Rennie, Hughes and Hefford led a defensive unit that had a major influence on the result; Paredes. captain Tom Muir and Drew were great on-ballers for four quarters. Fowler‘s five goals were a difference. Serong‘s role on Pleming of major importance and Nic Stevenson, Sam Russell, Mitch Nobelius and James Davidson were solid all day. 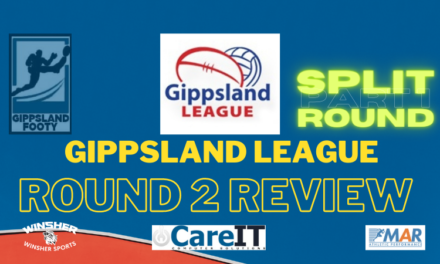