Leongatha played its best football of the year last Saturday to defeat fifth-placed Drouin by 121 points at Parrot Park and push up towards an all-important top-three finish by seasons end.

However, while it was good to see them get a solid contribution from all players on the roster and to link up superbly from defence or stoppage to goal, the result needs to be taken with a grain of salt.

Drouin had all of their first-choice onballers out with injury, some of them, like coach Jordan Kingi, with what are expected to be season-ending breaks.

Drouin president Chris Soumilas acknowledged after the game that while Leongatha was very good, his team was seriously undermanned.

“As well as Jordan, who has a broken arm, we’ve also got assistant coach Eddie Morris out with injury, and on-baller Chris Robinson has a broken bone in his foot, although they’re telling us now, he might get back. “Also out was wingman Tom Barr, our best intercept marking player David Olsen and another of our best onballers, Liam Axford, who has been sent to Nepal as part of his training to be a doctor.

“They could have found somewhere a bit closer to home for him to do his training couldn’t they?” asked Soumilas with a wry smile. “We’d hope to get a few back but it’s not going to be easy from here.” The Parrot faithful were delighted, ahead of their big goods and services auction night last Saturday, with plenty of animated banter in the rooms afterwards. They were especially pleased with the form of centreman Tom Marriott, kicking four goals and full of running in only his third game back from long-term injury. All the forwards were on song with Cade Maskell continuing his excellent form this season with another four goals, Chris Dunne chiming in this week with three, Nick Nagel good again, and although goalless on the day, Jack Ginnane featured with several goal assists. The defence was solid too, led by Chris Verboon and Sean Westaway, both having great years but with an excellent group around them. On ball, the Parrots looked good as well. Besides Marriott, Ben Willis was right up there among the team’s best, Hayden Brown is starting to run into good form and out on the wings, also providing support for the on-ball players were Brok Davidson who finished with three and Cam Stone.

Others to please supporters were young Aaron Turton with his pace and excellent foot skills and Josh Hopkins doing everything right this week after not having the run of it against Morwell the previous week. In fact, it was hard to name best players this week for Leongatha after a fine contribution by the whole 22. The only change from the previous week was Matt Borschmann out injured and Jackson Harry coming in to give Willis a chop-out in the ruck, if he needed it.

After consecutive losses on the road, Morwell returned home and snatched the premiership points at the expense of Warragul on Saturday, 12.9 (81) to 10.6 (66).

It was slow going in the first term for the Tigers who bagged two goals and three behinds to trail by five points at quarter-time.

Morwell bounced back in the third and overturned the deficit to lead by four points at half-time before a standout third term set them up for the win.

The Gulls were held to just one goal in the third quarter while the home side added four goals and one behind to set themselves up with a 22-point buffer heading into the last quarter.

Warragul won the quarter with four goals and three behinds but it wasn't enough to bridge the gap as Morwell ran out 15-point victors.

Tyler Hiller led the way for the Tigers in front of goal and booted three while singles went to nine others.

Among the best for the Tigers were Dan Musil, HIllier, Anthony Rosato and Kuiy Jiath.

The Gippsland League football match culminated in a bizarre final term, in which the Lions staged a comeback which threatened to undo three quarters of dominance from Sale.

On a blustery day, the Magpies opened the match with three goals in the first quarter, while Moe was kept to a solidary behind.

The second quarter saw a dour display, with both teams only managing four behinds as the ball virtually toed-and-froed between the arcs.

As the sides ran out for the second half, Sale began to exert its dominance on the contest. The Magpies had a staggering 17 inside 50s to seven for the term, and kicked four goals to take a commanding 41-point lead heading into the fourth quarter.

Moe was left searching for answers as to where it's next goal was coming from as the usually potent forward line had only conjured up one goal in three quarters.

The Magpies' dictation of play in the first three quarters had most feeling the game was over, as Sale played the game completely on its terms.

Moe debutant Lachlan Rock secured the Lions the first goal of the quarter. A follow-up goal soon followed to give the Lions another spark.

As the game appeared more than likely to pan out with Sale winning comfortably, spectators began to sit up and watch on with intent as Moe got on top in the clearances and continually got the ball inside forward 50.

In a bid to make something happen, usual centre half-back Lachlan Rees was thrown forward and with Moe getting nine clearances for the term, the makeshift forward was able to take a few contested marks and bring the ground ball players into the game.

Three more goals came for Moe in what seemed to be in a heartbeat, as a scarcely believable potential win materialised.

With equal first position on the ladder at stake, Sale responded to the onslaught and kicked three goals in red time to ice the game.

Mitch Dowse kicked a steadying goal to give the Magpies some breathing space, before Jackson Glenane and Jayden Allison both kicked truly to give Sale the four points.

In the aftermath it proved to be a hard game to dissect, as Sale would have felt it should never have let Moe back into the contest, while the Lions would have been wondering how it could go from only kicking one goal in the first three quarters to all of a sudden scoring five goals and having 13 scoring shots in the fourth.

The Magpies best players in the win were ruckman Jack Lipman, Dowse, veteran Chris Laverty, Jack McLaren, Jordan Dessent and Rhys Carter in his first senior game for the season.

Sale coach Shane Fyfe said his side would take some lessons out of the match, particularly the last quarter.

"Definitely up to three-quarter-time was the way we want to play but it was a good learning curve [the last quarter]," he said.

Fyfe said he sensed things were changing halfway through the final term.

"At the 15-minute mark Moe were coming and then a couple of positional moves were made.

"Moe got right on top in the midfield with centre clearances, we couldn't get ou hands on the footy but it was good to respond kicking those last three goals.

"We rolled a couple of different players back and opened our forward line up a little bit and that open forward line allowed us to get some ball in there and put pressure on.

"The boys just realised that if they didn't do something they were going to lose the game.

"We'll use it as a reference point because it might happen again some time.

"We spoke about it at three quarter time and said 'the game's not over, we don't want to let it slip."

With Sale now equal with Maffra on top of the ladder, the battle remains for the minor premiership and hosting rights to the second semi-final.

Fyfe said it was not overly concerning to him if the final was at Sale or not.

"A home final would be great but at the end of the day if you're there [in a final] you play it wherever."

Bairnsdale’s finals hopes are all but shot after falling at the hands of Traralgon by 27 points on the road on Saturday.
The Redlegs were unable to celebrate keeping their dream alive, and the 50-game milestones of Russ Cowan and Ricky Tatnell, the debut of Jake Richards and senior return of Paul Bills, despite an early push in the final term.
In windy conditions at Traralgon Recreation Reserve, the Maroons did the bulk of scoring in the opening quarter, however were unable to capitalise, leading by 10 points despite five more attempts.
After conceding the first goal of the second quarter, the Redlegs created numerous opportunities, however like Traralgon in the first term, a wayward 1.7 effort meant the home side led by 21 at the long break.
The third quarter was again a story of missed opportunities, until the Maroons found their mark in time on, Tate Marsh, Troy Forrest and Cameron Whiteoak kicking consecutive goals to push Traralgon to a 34-point lead.
The Redlegs made their run in the opening 15 minutes of the final term, with six scoring shots yielding goals to Brayden McCarrey, Kieran Vickery and Nathan Dennison, cutting the deficit to 13, however the Maroons stemmed the flow and kicked the last two goals of the clash. 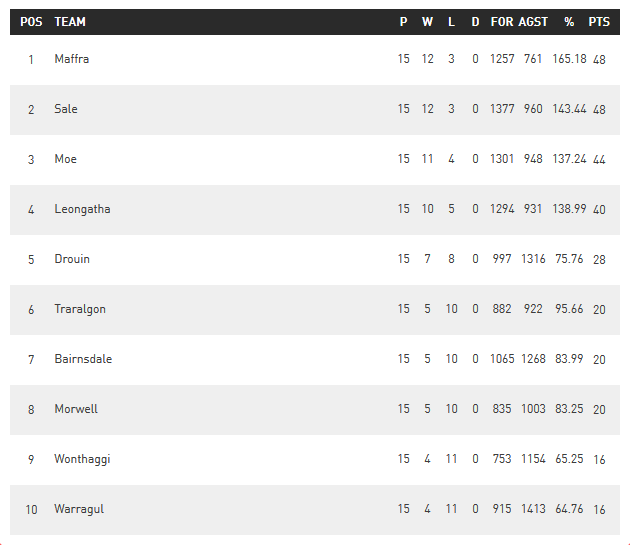